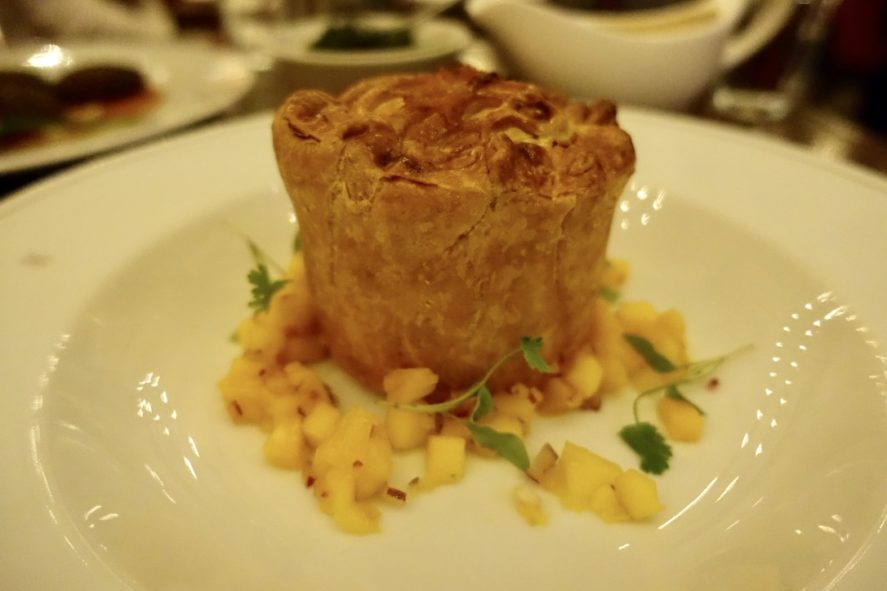 Holborn Dining Rooms (Est 18th of Feb 2014) is the current restaurant stablemate of the Rosewood Hotel, previously it was the super talented Jun Tanaka’s Pearl who had a decade long residency there.. Now Executive Chef of Holborn Dining Room is Calum Franklin. He started cooking at a tender age of 16 and honed his skills at Michelin-starred Chapter One in Kent where he worked under Andrew McLeish for two years. He is a man who obsesses over the important things like the “provenance” of ingredients, the design of a pie, inside and out and is London’s proclaimed savoury pastry authority. Check out his instagram and you’ll see why. He takes inspiration from what he sees around London, from Church’s to car wheels! Expect “hand-raised” old school classics like pâté en croûte and beef wellington. They do it properly here buy using identifiable parts of animal and pour cool stock into the spout of the pie, allowing it to turn into jelly which means more flavour. There is also a pie room decorated with ornate copper-coloured pie mouldings which they found hidden in the base of the hotel, more of the same is used to create their pies. I came twice in one day, once for breakfast and once for lunch. I couldn’t manage dinner, I’d ran out of time in the day.

I went for the smokes salmon, scrambled eggs and toasted brioche £15. It did exactly what it said on the tin with no frills.

Is this punchy for breakfast? I guess if you come to a brasserie of this magnitude, be prepared for wallet bashing.

To get us salivating, they brought over some in-house-on-the-house cured beef which a delight.

Then came the Monkshill Farm scotch egg £10, a famed winner of a recent scotch egg challenge, a place where plucky chefs get to showcase their best breadcrumbed snacks. With the gribiche sauce and its deeply savoury meat and crisped exterior I wasn’t at all surprised. I could have eaten five of them, but then it would cost me a nose-bleeding £50.

Ben my dining companion went for the grilled octopus with native breed chorizo and aioli £14. He seemed to like it.

Without question, you have to order a pie when you come here. Not doing so would be like going to like going to Smokestak and not ordering BBQ, it would be a crime against food. The irony was that the only one available when I went was the curry mutton pie with mango chutney £19. Did it deliver on its promise? Yeah. It was a pie greater than the sum of it’s parts as not only was the fresh from the oven crunchy pastry fantastic, the dense meaty filling was too; I got nice hefty chunks of slow cooked flesh with a pleasing bite. The mango chutney was more of a chopped mango salsa than a chutney, but it did it’s job of adding some brightness. Don’t be expecting broad-shouldered spice from the sauce, instead expect a very mild, like chip shop curry sauce.

Ben, a man who is a vegetarian who eats octopus and chorizo, went for the green pea fritters with sprouting broccoli and romesco sauce £16.

We’re good boys, so greens always feature in the meal. Even if steamed spinach will cost you a Lady Godiva.

The chips £5 with freshly cracked pepper and grated parmesan we’re better, they had a nice rustle and the cheese clung onto the heat of the carb.

No space for desert this time around..

Later on in the same month, I came to Scarfes Bar, the hotel’s space with wall to wall cabinets filled with rare whisky, with bartenders who wear sleeve bands and make sumptuous things to drink.

An aperitif on the house sir? Don’t ask, just pour!

The bar’s snacks says a lot about a place, they’re flipping good here. Their nuts have the right amount of sweet, spicy and savoury notes. Euphemisms are always welcome you filthy minded animals.

From all the drinks we had, the one that stood out was the “Highgrove” £20. It’s served in glasses coated in sugared floral dust made from the botanicals distilled in gin, there is also a sour blossom you can eat to soften the sweetness of the drink. They take bar tendering to a unparalleled nerd level here and are all the better for it.

Mid-way through our session, the Head Bartender took us for a surprise tour of the hotel – it was another compelling moment to add to the wow moments of the bar. Sometimes you do get what you want I life.

Since we were with an esteemed member of the industry, we got a cheeky concession on the bill.

When did I go? June 2017
The damage: Expect to pay £40/50 per head without drinks
The good: This brasserie stands out for many reasons, such as the surroundings that make you feel extra welcome, and the use of the finer cuts in the pies. I forgot to mention that they have a killer gin bar too and pie making classes for up to 10 in their pie room. You can come here, burn few hours and have a terrific time, be it on a date night, a group of you or with you nan. I’m sure they’ll look after you.
The bad: I’ve had cheaper pies else where, but they tasted less gutsy with a varying quality of ingredients. They don’t stutter here, so be prepared to fork-out a bit for one.
Rating: 4/5
Would I go again? Yes
Address: 252 High Holborn, Holborn, London WC1V 7EN
Web: https://holborndiningroom.com