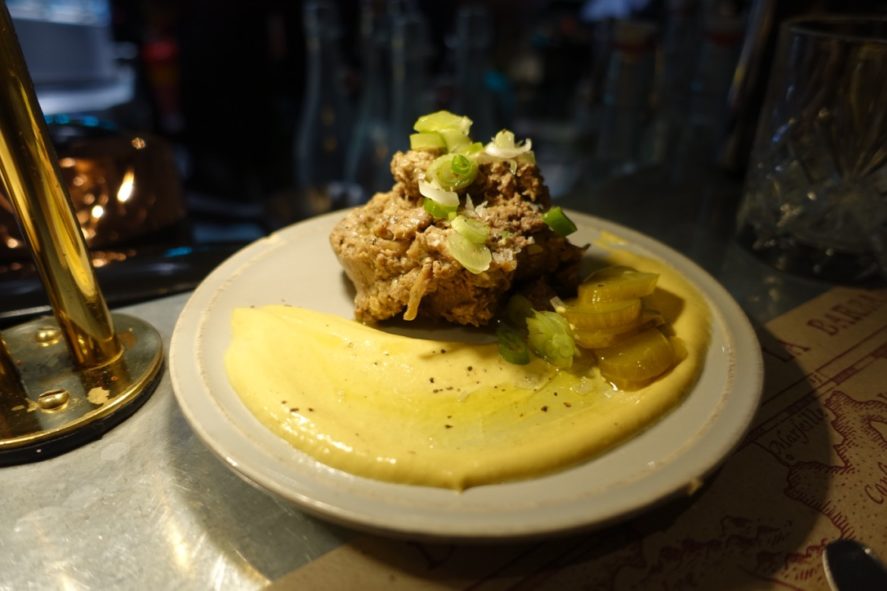 The Barbary is neatly placed in the quaintly cobbled Neal’s Yard. It’s the sister to the much lauded Palomar, which I thought was good, but not once during or after the meal plot a return – the Barbary is a different story, I’ve only been four times and counting. It’s been around since June 2016 is also owned by siblings Layo and Zoe Paskin. They aim to mesh flavours from Israel and the Mediterranean with a generous gesture of oomph boosted by paprika, turmeric, za’atar, cumin, thyme and lashings of salt. Sometimes too much salt, more on that later. The dining format is homogenous with Barrafina’s style, where cooking theatrics are for all to see around a zinc topped horse shoe bar. It’s a modern restaurant so of course you’ll see bare brick, lots of stainless steel and neon lights. The menu itself is is split across baking and grinding to plates from the land, the sea and the earth – meaning vegetables in this case. It’s full of familiar ingredients combined with the not so familiar, which is why I spent half the time enquiring. But that was a pleasure in itself and the staff are an entertaining bunch.

We start with “Askenazi” chicken liver £6.50 and it’s glorious. The chopped pieces of organ are melded with butter and comes with a big stroke of nose singeing mustard sauce, pound coin sized discs of gherkin and the freshness of spring onions. It was that compelling we ordered one each during my first visit. The chef in charge heard our vocal rhapsodising of the dish and gave us another portion on the house. That’s the beauty of having an interactive kitchen, you can be friends with the chefs.

They recommend the dish with “naan e Barbari” £3.50 which is baked in a tandoor oven for all to see, an oven machined for the very purpose of creating a puffy, blistered flat bread that’s exciting to eat as a thing in itself. Scoop the liver onto the glossy, crisp edges of the carb splendour and you’ll have a proper night out even before the other dishes arrive.

We also ordered the cauliflower Jaffa style £6.50 from the “earth” section of the menu. We’re told that the humble vegetable is brined in salt overnight then it’s fried until the edges blackened and the nutty flavours intensify within the florets. A zippy salsa of tomato and coriander livens up the palate. It was gorgeous.

Then we get octopus mashawsha £16.50, a singular tentacle as straight as a pencil on a smear of mbenah (yoghurt and labaneh combo) and harisa oil. The octopus got a good slow cook before it was caramelised on the grill, crisping the edges whilst the inside was still doughy. A dense stew of chickpeas gave the dish body and comfort.

Lamb cutlets Zuzu £16 were bone in chops crusted with spices that get another charring from the coals until the edges just blacken, intensifying the flavours. There’s more yogurt for soothing and a fist full of sage leaves that they set alight in the same skillet its served in, perfuming the dish and our nostrils.

Pata negra neck £17 were the best of the land dishes. Acorn fed swine is marinated in sticky date molasses which forms a bark when it’s fired, yet is still pink in the middle. More of the same molasses is drizzled all over the finished product with sweet stew of whole garlic cloves.

Pincho verde £13 was a skewer of spice encrusted mystery meat which is skilfully prised off the metal spike it was cooked on. Courgette, which is halved and blackened too was all juice and cooling at the same time.

Beef fillet hardal £18 was a hunk of flesh, smoky, dark exterior’d and the size of a small child’s fist. It was rare in the middle and came with braised mushrooms, more seasoned yogurt and the leaves of parsley spruced up with the acidic push of lemon. It was nice but in exceptional company, this dish was overshadowed.

It’s hard not to love a place where they call their dessert menu “Heaven”.

We start with “hashcake” £6 which sounds like a naughty night out in Amsterdam, but actually the only green in there are crushed pistachios which are baked with sugar, oatmeal and butter. The result was dense and fudgy, all the more satisfying for it.

Seeing unconventional ingredients in conventional deserts is common ground these days in our City, griwech and fennel ice cream £6 at The Barbary is a fine example of that. We got a lattice of pastry, honey soaked flecked with sesame seeds. The aniseed notes from the fennel interlaced nicely with the ice cream.

We complete the meal with “knafeh” £8 which is their take on a popular Middle Eastern desert of densely packed noodles baked to a crisp and is seasoned with orange blossom syrup. I can understand why it’s so popular as we made it disappear in 60 seconds.

As with most non-booking places in London, there is a place to perch and graze. My second visit we did very much that would a drinkable Gruner Veltliner Hirsch £52, olives £4 and squeaky spice pelted halloumi fries £5.50.

As with all good stories we commence with a compelling intro of “Askenazi” chicken liver £6.50. Don’t ever come here and not order it.

The same goes for the naan bread.

Prawns zur £12 was a new addition to the menu and what you got were fire scorched prawns in a pool of glistening parsley sauce.

Aubergine sharabik £9 was a triumph too. What I find is that aubergine can be one noted in texture and taste at the best of times. What they do here is add the freshness of mint, the sweetness of date molasses-stroke-raspberries, the crunch of nuts, peppers and lactic tang of yogurt. A dish testament to being greater than a sum of its parts.

It was a delight to see the pata negra neck £17 as a routine item on the menu too as it was one the most memorable and delectable things here.

On the house we got to try some of their chocolate truffles and “Junior’s strawberry sorbet” which comes with a whack of concentrated fruit flavour that was a nice gesture and palate reset.

Visit number three kicked-off at the side bar, naturally. They have a designated menu there too.

Arayes £8.50 were all about pitta breads filled with spiced lamb. The char them over the robata so you get blackened (I use this word a lot during this appraisal) grill marks and singed edges. Yogurt and a type of Sala verde takes away some of the salinity.

Squeaky fries had to be done.

The real star of the bar snacks were the Moroccan cigars £9. What you get were long craggy spring rolls filled with spiced minced monk fish, hake and cod. But somehow they were compelling and challenging at the same time as the chef was overtly enthusiastic with his Salt Bae impression. It’s fish not steak I tell ya!

A nice bottle of chardonnay Rebula £39 washed away the salinity.

Naan e Barbari £4.5 was by standard a bubbling feast of the carb heaven. This time we got to see the chef make it. Seemingly, his designated role for the evening was solely making them. But why not as he was bloody brilliant at doing it.

Zhug, harissa, burnt and pickled chilli £5.50 was an array of pungent condiments that I assume aren’t supposed to be enjoyed “solo” as they’re punchy and only the naan with glugs of water stop it from being nauseating. Most of it was left as it was repeating on us even after the first mouthful.

A salad of beetroot and labneh yogurt £6.50 was fine but nothing special.

The world started to spin again when the attention grabbing chicken liver £7 arrived. It’s waist thickening and sustaining and a must order.

The Jerusalem bagel £4.50 was a sesame crusted elongated joyous thing to eat. It came with a little brown packet of spicy dust for dipping.

Other treats the chef gave us for dipping..

Lamb cutlets Zuzu £18.50 (for two) are never shy of kitchen theatrics – they’re good, but I noticed that there was a price hike in them since my last visit. Given the value I think better chops can be had elsewhere like at Gunpowder for example.

Somehow we ordered the pincho again which is £14 a skewer. We ordered three which obviously came to £42. Now for the same amount of money I could had a whole meal in Barrafina, or Bao, or Gunpowder, or Som Saa, or Zelman Meats and so on. I could rattle on forever but you may have gotten my point by now. I’d side step this one next time. Better still we could have skipped it entirely and saved room for the stunning deserts here.

Visit number 4 was a pre-dinner escapade before we ventured down to Somerset House for the 20th anniversary screening of the Matrix. One of the most strikingly original and influential films of the modern era. Of course all the tables are taken and were perched at the side bar upon arrival.

Then we get the Moroccan cigars £9 which have the correct amount of seasoning this time, Salt-Bae-was-kept-at-bay.

Barbarian falafel £4.50 with a cooling green chutney, tonsil tickling harissa sauce, and a mustard yellow number seemed to slip away nicely too.

Of course we had to get more.

“Hummus25%” £6.50 was the first to arrive from the “baking and grinding” section of the menu, don’t ask me why there is “25%” attached to the hummus. Hummus has never been my favourite thing to eat, it’s nothing offensive, but it just doesn’t really make me happy – I just prefer things with structure and form.

Then comes the ashkenazi chicken liver £7 which is one of London’s greatest eating pleasures right now. Rip and scoop with the naan e barbari £4.50 for some grin inducing action.

Beetroot £6.50 comes in the lush deep purple sheen and labneh which yogurt that is strained of all it’s moisture, giving it a more intense flavour.

Ok so it’s only watermelon, a bloody sweet one at that and feta £6.50, but it provided temporary relief to the staunch flavours our palates were treated to.

Not ordering the pata negra neck £21 is like missing the point of the outing, if you don’t, then what exactly is your problem?

And it’s flamed right before us.

When did I go? Apr 2017, Jun 2017, Feb 2018, Aug 2019
The damage: Expect to pay £50/90 per head with booze
The good: There’s no denying that there is some really pleasing food here with calories well spent. Let’s take the chicken liver, naan bread, Jaffa cauliflower and that unctuous pata negra neck as examples – all sublime stuff and dishes I’d come back for. Not ordering the pata negra would be a crime against the swine! Interacting and having banter with the chefs was just peachy too, you don’t often get experiences like that – some of London’s greatest eating pleasures can be had here.
The bad: Now here’s a moment where I whine: Any pragmatist would understand that a restaurant based in prime real estate will demand a fist full of your sterling. This is fine, however better meals can be had elsewhere for the money in my personal experience. That point aside, a few of the dishes I ate had palpable whacks of salinity that had me bracing for the end sooner than I wanted. Like the pincho kebabs and the zhug/harrisa concoction. Perhaps they were misguided Salt Bae moments.
Rating: 4/5
Would I go again? Yeah why not
Address: 16 Neal’s Yard, London WC2H 9DP
Web: https://thebarbary.co.uk