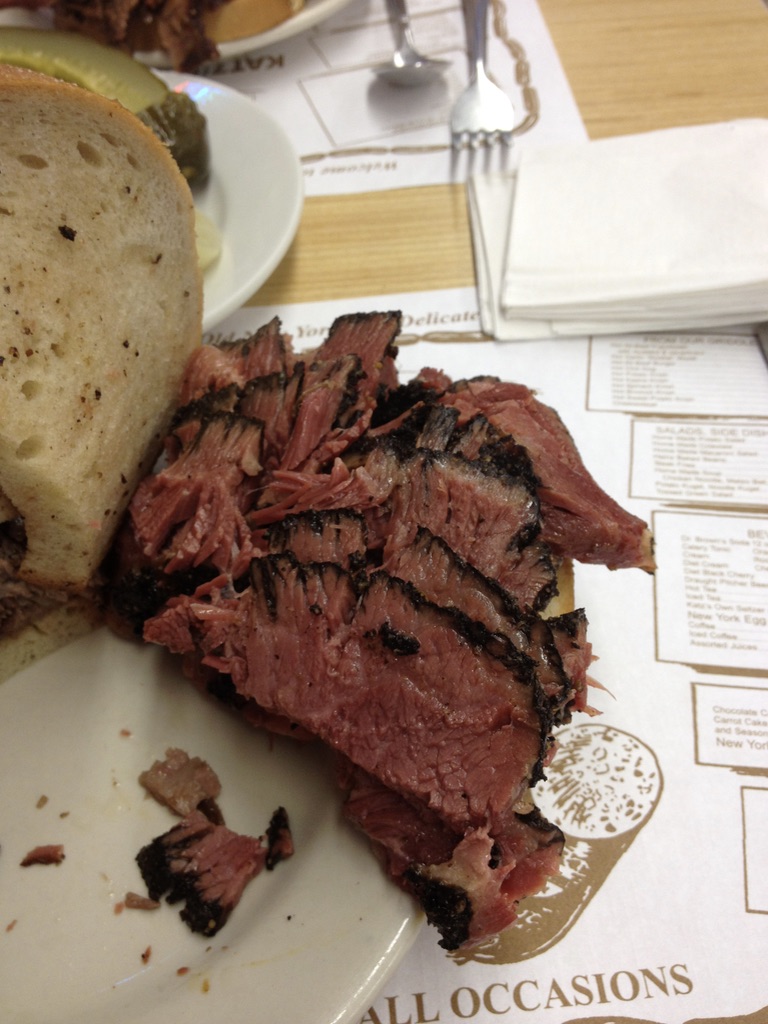 Katz Deli, a New York institution which opened in 1888, is the oldest deli in America, famed for their meaty sandwiches. Although they go through over 40lbs of beef brisket daily, their pastrami which comes from the navel of the cow, is their best seller – apparently they shift 4000 sandwiches a day, that’s 1500lbs of animal! The meat is first cured, rubbed in spices, smoked, then steamed – the whole process can take up to a month to get right and recipe hasn’t changed in generations. The meat is then cut against the grain for extra tenderness and if you haven’t been here before, you need to go for the original, in my opinion, which is the pastrami on rye with mustard. It’s immense! The pickles come in two forms, half sour and whole sour. Put simply the half sour is brined for less time giving it a firmer texture and more of the vegetable’s natural inherent sweetness is still there. The whole sour, has more of a brined, pickled tang to them. Katz’s Corned Beef Hot Sandwich $18.95. A dry cure pickling formula is applied to the beef which takes up to a month before we get to taste it. What you get is a soft-yielding beefy heaven, it was like no other corn beef I’ve ever had. Its a celebration of beef in all its royalty. Katz’s Pastrami Hot Sandwich $19.95. You can see the huge slabs of pastrami where the orders a taken, and what catches the eye immediately, is the craggy mahogany exterior, steam billows as it’s pulled from the steamer. Every piece is hand carved to order and what you get is a succulent, sumptuous, mildly spiced sandwich that garners attention. Since it was our first time here we decided to order both the brisket and pastrami – but hands down the pastrami is the one to order. When did I go? June 2012
The damage: Expect to pay $25+
The good: My previous experience of pastrami was from my supermarket deli which was pleasant enough, the sandwiches here though, are just a different league. The mouth-wateringly good pastrami is hands down one of the most gorgeous things of eaten in NYC. Coming here is not just an experience, it’s an event and I came close to making the same noises as “Sally” did.
The bad: The neon lit, greasy spoon-esque, no thrills venue may not be for some but the sandwiches here are game changing.
Rating: 4/5
Would I go again? Yes
Address: 205 E Houston Street, New York, NY 10002 USA
212 254 2246
http://www.katzdelicatessen.com/