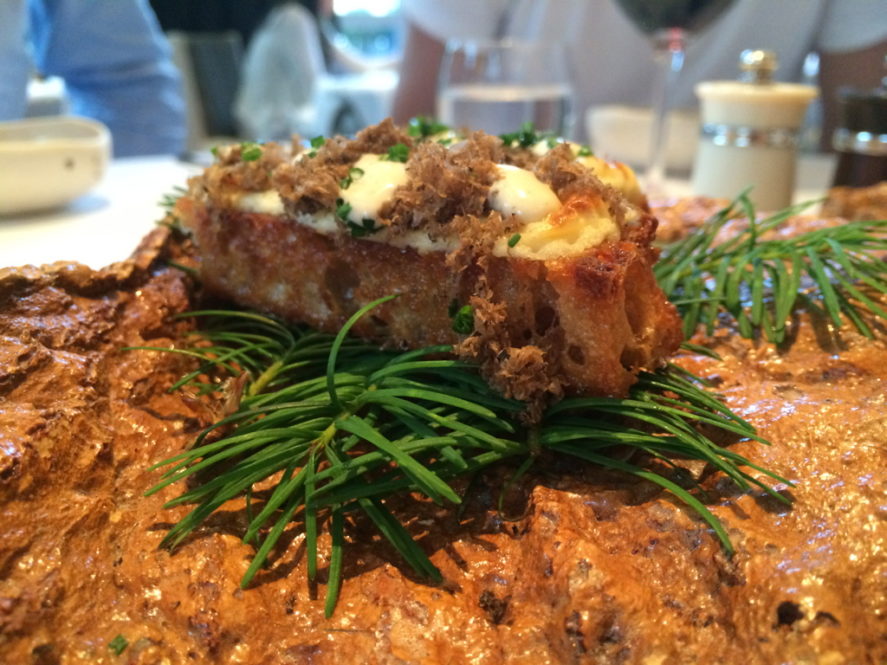 So I’m late to the party with my review of The Ledbury of Notting Hill, London. But late is always better than never right? Amongst other ornaments, The Ledbury have held two Michelin gongs since 2012 along with features in S.Pellegrino World’s 50 Best Restaurants consistently. They were number 10 when I visited in 2014. I believe they were number. 27 upon writing this appraisal. The restaurant first opened in 2005 with Head chef Brett Graham, from Oz in command. He’s still there. They have a sister called The Square, where Brett has done a stint, she’s got two stars of her own too. The dining room is relaxed with shades of green, dark wood and long hanging drapes.

On the night there were a choice of two tasting menus, we all chose the second one sans the wine pairing, so we picked our own poison.

To get the palate going, first up we had the utterly brilliant apple with cured mullet. I can see that a slither of raw fish was placed on a sheet of thinly sliced apple, then it’s expertly rolled into cylinders. Six are placed on a plinth of pink Himalayan salt. The result is spritely, palate cleansing and very likeable.

Next up were intensely porky brawn croquettes, with crispy lovage and mustard flowers. Calling it a one bite wonder wouldn’t do it justice.

Foie gras came in the form of little puffs topped with a rectangle of mead jelly, served on what I can only describe as rooty plant matter.

Steamed brioche with crispy shallots and bacon were the amuse bouche of the night – they were soft, doughy & luscious.

Seeded sour dough with whipped goats whey was mega too.

Noire de crimée is crimson- skinned, Russian tomatoes, with incredible flavour and juice. In the same vein the other tomatoes were equally explosive in flavour, the whole dish was full of flourishes, never before was I so engaged by a tomato dish!

Mackerel gets the torch treatment, then a rush of acidity and texture comes from the pickled cucumbers, Celtic mustard and shiso. It goes without saying the dish is a marvel.

Hampshire buffalo milk curd was a silken pool of jiggly stuff that gets a good pour of grilled onion broth with enough depth to carry the whole dish. The tang of aged comté introduces itself too with other little trinkets.

The truffle toast it came with was a genuinely magnificent umami concoction too. Crispy buttered sour dough gets a slather of cheese, creme fraiche, chives, and black truffle.

Hand dived scallops had a confectionary sweetness balanced out by earthy shiitake along with earthy cauliflower cooked three ways. A tangy sweetness comes from a drizzling of sherry reduction. Everything on the plate belonged to one another and it was cast iron delectable.

A jowl of pork which was a soft yielding piece of loveliness, came with the sweetest opaque carrot, lush girolles and crackling that have an echoing crunch from every bite.

Herdwick lamb was butter seared on the outside; ruby pink to the core, like how it should leave every kitchen. It gets a quenelle of salt baked kohlrabi, a spoon of ewe’s milk and garlic to keep things in good measure. The sauce was soothing and rich, with a welcome hit of herby oil.

Going onto the final courses, cheese is available too. Apparently, the offering here is legendary. Eating it isn’t part of my skillset – I’ve tried to like it over the years but failed.

The pre-desert of creme Anglaise, prune granita and a fruit reduction was an exciting way to cleanse the palate.

Our desert, a tarlet with a focus on strawberries, English flowers and cream was an affectionately constructed delight. The vibrant strawberry sorbet and violet ice cream it came with melted into the buttery tart like a contemporary piece of art.

Jellies seem to be the standard petit four in Michelin restaurants, here though, they elevate it by infusing ginger and injecting caramel custard into the centre.

Despite being full to the brim, we also got a chance to inhale some coconut ice-cream dipped in chocolate and desiccated coconut.

When did I go? June 2014
The damage: Expect to pay £180+ per head with drinks.
The good:  The Ledbury is unbelievably great for upscale, technically brilliant dining. The chef seemingly, has his eyes in the present and the future, to bring food that transforms moments into memories. There wasn’t a single dish that was a dud, nor was the service questionable. Our servers knew everything about everything to do with the restaurant – like how they should at this level.
The bad: It will make you wallet bleed.
Rating: 4.5/5
Would I go again? On a special occasion for sure
Address: 127 Ledbury Rd, Notting Hill, London W11 2AQ
Web:http://www.theledbury.com