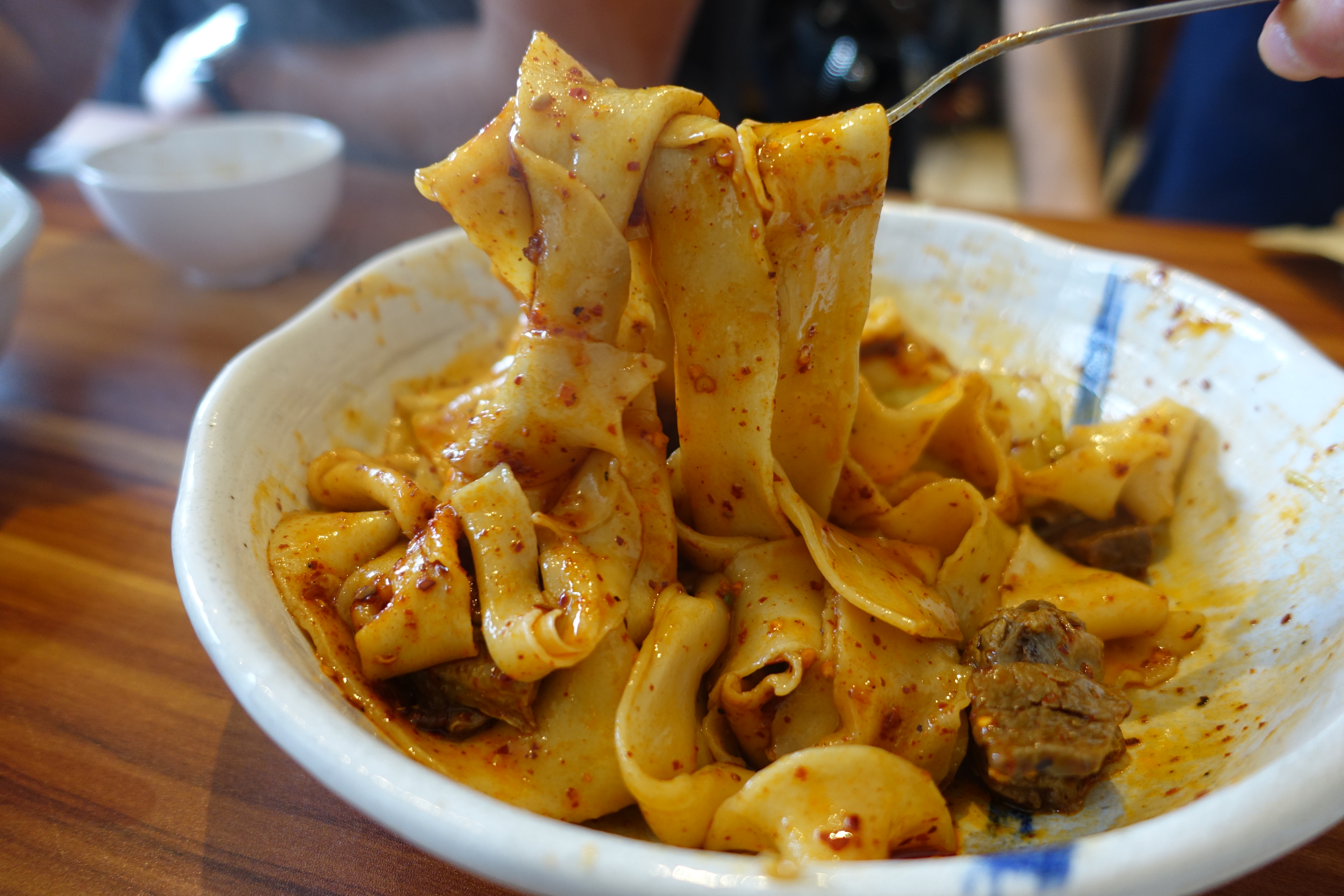 Xi’an Impression is run by the guys from Sichuan Folk. It first opened in July 2015 directly opposite the Emirates Stadium in a very unassuming sparsely decorated room for about 20 covers, serving street food from the City of Xi’an in China. (Well known for being the home of the Terracotta Army). The chef in charge is Wei Guirong, born in Xi’an within the Shan Xi provence and was trained from an early age in the cuisine of Shan Xi. She is also a former chef at the popular Soho eatery Bar Shu, they’re famed for classic Sichuan dishes, so she knows a thing or two about cooking this type of food. I’m definitely an advocate of Xi’an Impression after eating here, it’s not just an education lesson, but a demonstration that there is a world outside of high street Cantonese fare adapted to British tastes. The stuff that we’re all so familiar with, dishes topped with cashew nuts, drenched in neon coloured sauces, duck wrapped in pancakes and generally consumed in front of the telly! The food here is different, intense in flavour, spicy, aromatic, sometimes hot, occasionally cold and mostly mouth numbing!

The menu is easy to follow especially with pictures for each description – it’s perfect for the novice. At the back you have the ubiquitous sweet and sour pork as well as the salt and pepper ribs/squid – do yourself a favour and order something different to the cliche stuff! Hand pulled noodles with pork mince and veg (£7.80) was a comforting treat of noodles soaked in and punched-up with rich savoury sauce – it was carb fuelled mass powered by fermented soya beans that could set you up for the day. Julienned cucumber added that freshness and the bean sprouts gave the textural bite. It was one of the shining moments of the meal. Xi’an beef burger with special sauce (£3.80). I was a little confused with this one as although the beef was spiced well, prevalent in cumin, I found the bread dry – it was like a plain Jacobs cracker sucking the moisture out of my mouth and the meat was a bit parched too. Perhaps it was an off day. Xi’an biangbiang noodles with special chilli sauce (£7.80). Aptly named ‘biangbiang’ from the noise the dough makes when it’s hand stretched and walloped against the flat surface beneath it. The coating on the thick ribbons of noodles get’s the saliva glands going into overdrive. It was one of the best things I ate of the day. Yikouxiang in traditional spicy sauce (£6.20). Layers and layers of al-dente cold dumpling skins with the sheen of luscious chilli-oil and soy nestling on a bed of cucumber, and why not? I really enjoyed this carb mountain. Fried chicken and mushroom dumplings (£5.80) are Xi’an style open ended pot-stickers, thickly wrapped with crisped bronzed coloured sides, filled with a well seasoned filling and are all the more satisfying for it. “Xinjiang stir fried chicken with bones serve for one” (hand-pulled noodles) (£9.80). It’s those long ribbons of hand-pulled noodles again which were delicious in all of the viscous copper-coin coloured meaty sauce. Where the goodness stops and here is when I whine; I found myself glugging cups of water from the overtly seasoned chicken, it tasted like the chef decided to “Salt Bae” the heck out of it and the amount of five spice was overkill. And this is coming from someone who doesn’t like wimpy flavours. Tune it down and it would be something spectacular. Beef slices in chef’s special sauce (£6.8). The first thing that came to mind was that this is Xi’an’s version corned beef! I believe it’s beef shin slow braised until tender – dip it the dark pool of chilli infused soy for all it’s splendour. Boneless chicken in ginger sauce (£6.20). A fellow diner referred to this as the redeeming dish since the others weren’t to their taste – I disagreed and found this one a little insipid compared to the others. I’m a big fan of chicken skin when fried, roasted or grilled not boiled which this one was. I’ll put this one in the to-be-missed pile next time. When did I go? Feb 2016
The damage: Expect to pay £15-£20 per head for a load of food!
The good: Don’t expect anything gourmet at this price point but hand-pulled noodles are the order of the day here, they are a sponge for flavour and flavour they have a plenty. The dumpling wrappers and dumplings themselves are quite interesting too. So if you want to be a fan and you’re in the area wanting to try something off-piste with outstanding value head up here during a non-match day. Oh and it’s BYO too.
The bad: The Xi’an beef burger was a challenge to eat – I’ll would avoid, although the chef may have been on an off day. The toilet is up some narrow stairs adjacent to the one of the restaurant walls, beware of the shabby door that’s cobbled together with recycled wood and it comes with a dodgy lock! There’s not a lot to really complain about though at this price point.
Rating: 3.5/5
Xi’an Impression, 117 Benwell Street, N7 7BW
Tel: 0203 441 0191
xianimpression@gmail.com