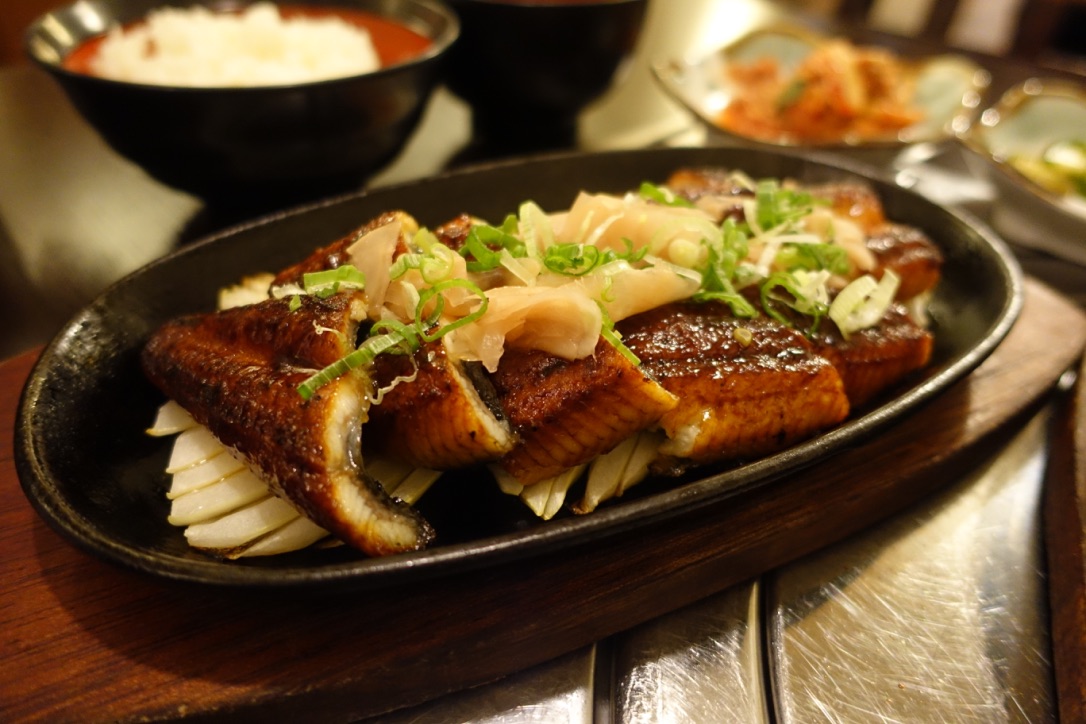 Without visiting Korea, it’s impossible for me know how authentic Korean food is in London. What I can tell you though, is that New Malden has long been the town (SW London), with the highest concentration of Korean folk, thus the need to densely populate the high st with Korean restaurants – when the people come, so do their food. I’m not an expert on Korean cuisine per se, but after spending a lot of time in New Malden, I know enough to suggest where you should spend your money when eating here.

KJ Restaurant is a sushi and grill spot right in the thick of it. The menu, entirely laminate, is split into two halves. One is predominantly Japanese, sushi with katsus and teriyakis, the other side is Korean. I skip straight to the Korean where there are hearty stews, BBQ and the usual suspects such as pajeon which is a pancake usually laced with spring onions and seafood or kimchi. It’s crispy & craggy on the edges from being fried, but soft and dense in the middle. Ordering this is a must if you come to New Malden.

We ordered this pinot grigio £21.50 as it was a Monday night to lift the mood. Perfectly serviceable, but nothing special. You can get it in shops for circa £8.

Here’s the pajeon £7.50 I was talking about, so synonymous with Korean cooking. What I got though was a mere shadow of what a good one should be. It was tepid, soggy and an insipid, like it was left outside from lunch service.

The gyoza £5.50 comes with minced pork, beef and vegetables here. The latter being onions and cabbage, or least that’s what I can taste anyway. Just like the pajeon, they don’t really hold their own and we’re left uninspired after eating them.

The banchan which are huddle of small plates usually served at the beginning of the meal. Kimchi and other fermented or lightly pickled items feature. We got ours after the starters, if I’m being really fickle they arrived late, it’s a small annoyance.

Beef teriyaki £13 is thinly sliced sirloin served on a bed of tangled beansprouts, all neatly placed on a ripping cast iron dish, bubbling with teriyaki sauce. Finally, we have some tasty food. Its a redeeming dish.

Grilled river eel £21.50 is lacquered with thick, sweetened soy and topped with pickled ginger, all on a bed of cabbage. On a iron dish too, albeit less dramatic than the beef due to its cooler temperature. Its not bad.

When did I go? Dec 2016
The damage: Expect to pay £35 per head with wine.
The good: The latter part of the meal garnered our attention, but only just. The overall experience was a bit disjointed and the getting a classic like pajeon wrong is a cardinal sin in my book, god knows what a Korean mama would do if she witnessed this – there would be slaps, not words.
The bad: Everything apart from the mains which were just ok. With the endless of choice of Korean restaurants in New Malden, I’d steer clear of this one.
Rating: 2.5/5
Would I go again? Nah, better can be found elsewhere.
Address: 65 High St, New Malden KT3 4BT
Phone: 020 8942 3602