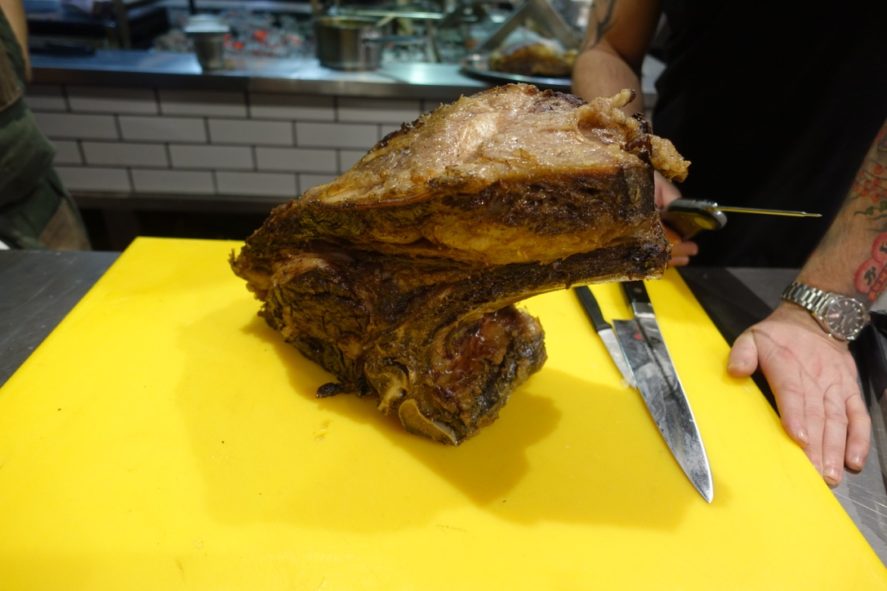 Meat is the mantra at Temper Soho and you’ll get tonnes of it from different breeds of animal sourced from the UK. The weapon of choice is flaming over a live-fire, hence the name live-fire cooking – the meat is tempered by grilling or smoking over a pit of red scorching wood. Neil Rankin is the man that brings it to us. He was part of the original Pitt Cue cult which helped bring barbecue into the mainstream and also did stints at Smokehouse and Bad Egg. In November 2016 he opens Temper Soho. The intent is clear as soon as you walk into the reception area of the restaurant, which is akin to a country lodge bedecked wall to wall of neatly stacked fire wood and bottles of vino. The smell of smoke lingers in the air as you walk down into the basement into the dining area too, it’s no surprise that the kitchen is the centre piece here for all to see.

There is a good choice of booze, be it wine, cocktails or craft brews.

So onto the food..

Crab taco diner £9 came with a whoosh of the ocean and creamy avocado. The tacos they came with, which were the same of the other dishes, seemed like they had their moment elsewhere; the lacking suppleness made me feel a bit indifferent about them.

The aged cheeseburger burger dinner taco £8 had the funky notes of aged beef and dark bark char from the scorching heat. It disappeared within 3 seconds so we couldn’t really appreciate it for what it was. It was possibly the least satisfying burger I’ve had. If you’re going to do a burger at least give me a slider!

Lamb kidney tacos £6.50 were great, but in the same vein as the burger, the itty-bitsy amuse bouche sized treats disappeared quicker than I could blink – this seemed to be the theme of the outing.

The plethora of condiments & sprinkles we had from blackened pepper salsa, chipotle sour cream, green sauce, MSG ketchup, tomato salsa, pork rind, shrimp and crunchy onion which was crushed up pickled onion monster munch! All were of novelty and necessity to boost the proteins.

British white beef £9.50 per 100g was sliced in such a way that huge pieces of fat were attached on either side of the protein.

Goat £9.50 per 100g came slow cooked and shredded swimming in a pool of slick fat.

Mutton kofte £5.20 was a teeny caramelised crumbly piece of funk. As much as I would love to love it, I found the experience insipid and parched.

Burrata £7 came in a puddle of salsa and slithers of fruity chillis.

Smacked cucumber £4 were a trip to Chengdu. You got a good lacing of hot oil and numbing pepper corns so indicative of Szechuan cooking.

When did I go? Dec 2016
The damage: Expect to pay £50/60 per head with booze
The good: There’s lots to like about Temper. The basement occupies a mighty space that was easily enjoyed and from what I experienced, serves up a good selection of well made cocktails, craft beers and a symphony of well sourced meat radiant kisses full of carbonic sear.
The bad: We smelt like a bonfire when we left, but that’s ok. But here’s where I grumble more; what troubled me was that the food really didn’t make an impact and we left slightly underwhelmed but not disappointed. Even though there were a lot of inventive combinations, mostly involving animal fat of some sort and a lot of it (come here if that’s your jam), I wouldn’t endorse Temper over some of the other stalwarts in Soho. The elephant in the room which cannot be ignored was the, as advertised, “dinners”. It’s a word that symbolises satisfaction, but what we got were amuse bouche sized tacos that barely touched the sides.
Rating: 2.5/5
Would I go again? Still deciding.. It’s been a while since I visited so things may have changed considerably since.
Address: 25 Broadwick St, Soho, London W1F 0DF
Web: https://temperrestaurant.com/temper-soho/