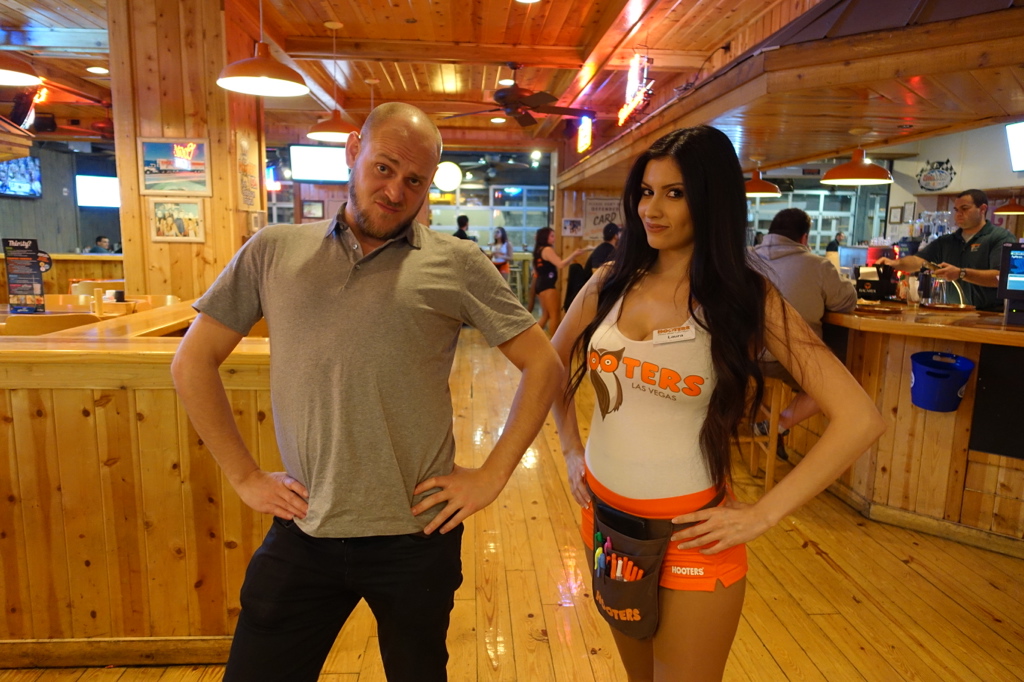 Hooters Casino Hotel means burgers, wings, lots of fried things, salads swimming in ranch dressing, artery swelling deserts, and of course tits. Scantily clad ladies in hot pants are everywhere, thrusting their bosoms whilst taking your order and serving up your burger. Sex sells! I came here in January 2016 with a group of work mates for company incentive – I had my arm twisted! When in Vegas as they say, so leave your culinary snobbery behind.

Our waitress for the night. I’m not sure if there isn’t a single fried thing on the menu? They came with their house dipping sauce, which was invariably some sort of ground spice mayo concoction – but it didn’t mask the salinity levels of these breaded salt bombs. If sea water was in fried form, this would be them. One was enough. Boneless wings with some sort of ranch sauce – I think they were triple fried in the morning, in the afternoon and finally before serving. I don’t think they were fit for human consumption! The buffalo shrimp received a similar fate, although they were mildly better than the wings and almost as equally salty like those poor pickles. The burger was a stacked up high feast for the eyes. The provolone cheese melted nicely into the patties but sadly, it was the only moisture the burger had. The bun was as dry as Gandhi’s flip flops and the beef wasn’t too far behind. It’s probably best to put it out of it’s misery and drown it in ketchup My mate went for the pulled BBQ pork sandwich – food envy 101 kicked in as that pork looked a lot more moist than my burger. If you’re going to do debaucherous things to your body, you may as well do it in style and chase it all down with tequila shots! Have I got the job?! Our hostess was definitely the one with the mostess – she beamed all night long and entertained our jet-lagged eyes with her charm. Hand drawn hearts should feature on every bill right?