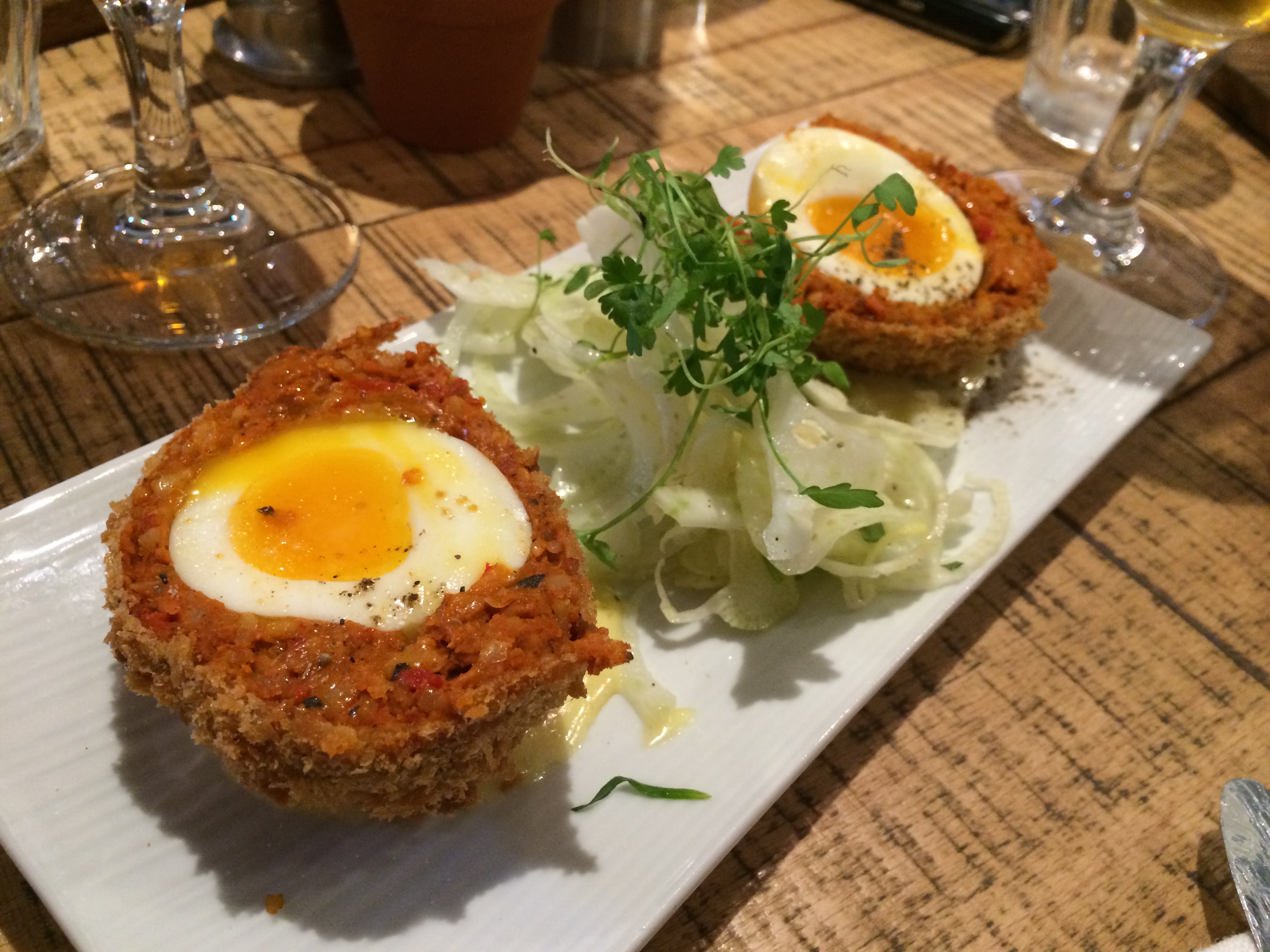 The Grain Store is every vegan’s/vegetarian/gluten allergy diner’s dream. I came back in May 2014 to try it out. You guessed it, their USP’s are the vegetables and boy do they do it good there – don’t get this confused as a vegetarian’s haven though, but a veg-centric restaurant with a focus on dishes from all over the globe – inspired by owner/head chef Bruno Loubet’s travels. He teams up with with Michael Benyan and Mark Sainsbury of the Zetter Group, following their success of the Zetter Town House. They opened during June 2013, in the trendy regenerated Granary Square of Kings Cross and receives a Bib Gourmand in their first year. Located above Regents Canal, it looks like a giant art installation with spurting fountains, highly pruned trees with a backdrop of restored 19th century brick warehouses. It also shares this traffic free space with Caravan which I can’t wait to try either. The clientele are of a varied sort, well heeled and hipsters alike, all brought together to dine. What’s really nice to know too is that Bruno plans to open a Grain Store in Gatwick airport too which is a welcome culinary gesture to the otherwise drab food choices at the airport.

The stylish interior is a mixture of simple industrial warehouse chic and an Ikea catalogue as one of my dinner compadre’s eloquently put it. The restaurant is vast, seats 140 covers and the theatrical open kitchen is a blast as you walk past. We go for the £39 surprise menu as we simply couldn’t decide, and the element of not knowing what’s coming can go either go North or South, but fortunately we were in a safe pair of hands. Paying tribute to their suppliers was a nice little touch and it was good to know where the produce/products came from. We kick off with the vegetable chorizo scotch eggs that we requested to be added into the surprise menu (£6). Served with aioli, sliced fennel, the pulses & lentils that replaces the meat, carried smokey paprika flavours which shone through. I’m convinced that any unsuspecting diner would believe they would be eating meat! They were really stand out for me and the flavours really woke up the taste buds. First up on the surprise menu, we have the grilled asparagus with what seems to be pea sauce. It was like spring on a plate, a sure fire way to remind us that summer was ahead of us. Annoyingly, the asparagus could have done with a little less cooking to retain some its natural crunch, to avoid being limp and uninspiring. Mix leaf salad came with grated fish roe – the concept was great but in the end it was merely a bowl of under dressed leaves, the other diners barely touched it and probably something I would say no to next time around. These little falafels were top notch, you could really taste the spiced chick peas which were really moist inside its crunchy overcoat. It got a topping of  tahini, parsley and mint. Wonderful stuff. I was pretty enthralled by this dish, a totally well put together stew, consisting of lentils and spices. It had this irresistible nutty flavour with cumin and was all lifted by the chopped sweet onions, tomatoes and parsley. The oily piece of mackerel on top was grilled so well too. Pure comfort in a bowl. A earthy rustic dish that worked really well in my opinion were the plum hued beets with duck breast cooked to a perfect pink. It came with skewered duck hearts which were no joke, they were excellent. The roasted onion, soaked prune and fresh red currents gave it that sweet/acidic dimension to lift the dish. Meringue with cream and strawberries. It tastes exactly what it says on the tin but not the most exciting desert to be honest with no boundaries pushed. Not a tragic end to the meal but we really expected something more inspiring. The damage: Expect to pay £50-£70 per head with wine
The good: The vegetable chorizo scotch eggs were a revelation, the falafel and mackerel dish on par too. The restaurant atmosphere is lively as well as entertaining with the open kitchen with swift & polite service. The Grain Store is a nice addition to the London restaurant scene with its broad geographical influences whilst showcasing the vegetables alongside the meat.
The bad: Some head scratching moments with the asparagus, mix leaf salad and desert – a large iron is required to get rid of some of those creases to a turn a ‘hit and miss’ restaurant into something quite special for the value.
Rating: 3/5
www.grainstore.com
1-3 Stable Street, Kings Cross, London, N1X 4A