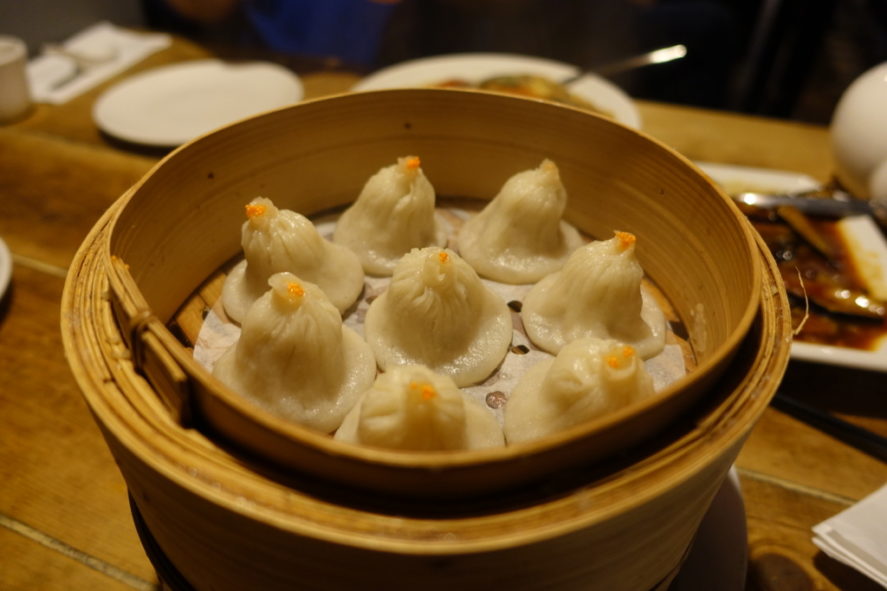 Leong’s Legend, sister restaurant to Dumplings Legend specialises in Chinese food from Sichuan, Shanghai and Taiwan. It’s been a stablemate of the Chinatown circuit for the past 10 years or so and they’ve moved a couple of times since I’ve known them. From Lisle Street, to Macclesfield St, now Gerard Street. I was smitten by the hand pleated xiao long bao at Dumplings Legend, the celebrated Shanghainese soupy dumplings. The lustrous skins hold sweet minced pork and hot soup that explodes in your mouth like a culinary flavour bomb. I came to see how good they were a while back at their now defunct Macclesfield Street location and then to their Gerard Street base.

At first we got the crispy oysters with salt and pepper. It’s a snack that’s pleasing and made for the Tsiang Tao beer that we glugged.

Supreme crab meat xiao long bao £8 were a silky little dumpling filled not only with crab but pork and nuggets of pristine prawns. If you like a bit of surf and turf dumpling action then get these.

Leong’s xiao long bao £7.50 again had the lustrous dumpling skin that dissolves on the tongue – this time they were filled with pork and prawns. Remember to dip them in the black vinegar ginger sauce for a nice tongue pucker, there can be no other way to inhale them.

A Sichuan classic came next in the form thick slithers aubergines £9.50, wok stewed in spicy broad bean paste and enough garlic to make anyone within your 5 metre radius tremble at the knees and make their eyes water.

Sticky Taiwanese omelette with oysters £9.50 is a famed night market street food snack – as standard it comes with a sour & sour sticky red sauce. If you’ve got that taste for Hong Kong style sweet & sour dishes then this might be your jam.

Sweet potato congee £5 can be a plain Jane to some, but the boiled down rice with only the sweetness of the sweet potato seasoning it tastes intensely of itself, it’s a cloud of comfort in a bowl.

The Sichuan dry noodles £6.80 came in a square-ish bowl, their thick pearly white ribbons soaked up the mystery dark swirl of broad bean pork mince like a Yin-Yang symbol. Aside from using your chopsticks, this is where you have to apply some user admin, mix the two for maximum effect.

Pan fried garlic shoots £9.50 were sweet and had a crunch to the core. They tasted healthy and bloody delicious. Sometimes a backlit of nostril singeing garlic lets your senses know its there.

Special “three cup chicken” £12.50 was a classic Taiwanese stir fry with a name derived from the equal ratio of soy, rice wine and sesame oil used to form the base of the dish. There’s flecks of chilli flakes and ginger paste too for extra tonsil fire.

Finally came the slow braise of beef brisket £10.50. With it came mange tout, carrots and bak choi. It’s thick, but not too thick star anise laden sauce was literally giving its over spillage onto the table when it arrived.

Inside, there is a similar rustic Taiwanese charm about it, with some modernity of course. There is a big bar as you walk into the restaurant which is based on Gerrard Street, where many Chinese restaurants cluster here. There are murals on the walls – Chinese characters that look like emperors clutching sticks. Tables are packed closely together around the wood panelling beneath the charcoal ceiling.

We start with their dim sum platter £10 which comes with four kinds of dumplings. Of course har gau features, all but one contains sweet prawns and that’s the small boned vegetable one that acts merely as a space filler, it’s a waste of calories, I’ve had better frozen. The favours are gentle so do remember to dip them into the black vinegar with expertly julienned ginger.

My go to are the spinach and prawn dumplings, each is comes in a vivid jade green and is packed full of crunchy sweet prawns.

Of course we had to get the Leong’s signature xiao long bao £8.50, they were as good as last time.

Sesame pelted prawn and pork spicy wonton £7 were pleasant enough, but the ones that resonate with me are the ones from Yauatcha. They have the unmistakable whack of flavour coming from the Sichuan hot oils they swim in. These we’re good but not that memory – I shouldn’t compare but human nature forces me to.

Stir fried green beans that have wrinkled and intensified from the frying comes with mince pork £9.50 and anti social amounts of garlicy fermented bean paste, this is where the restaurant excels. This dish is made for Tsing Do beer.

Here are the vampire slaying pan fried garlic shoots £10.50 again. I find their crunch, sweetness and garlic back-tones irresistible, even if they repeat on your for days.

Their signature Taiwanese omelette £10.50 comes with meaty umami rich oysters and is slathered in sweet, sticky sauce, there is sautéed choi sum nestled beneath, which is a welcoming hit of crunch and iron to an otherwise textureless dish.

When did I go? Oct 2015, Jan 2018
The damage: Expect to pay £40/50 per head with drinks
The good: If you fancy some comfort eating with a sharing culture to its core then I come here. It’s a lot more than just the dumplings, although they are a must. Let’s take the oyster omelette, green beans and garlic shoots for glorious examples. I’ll have those day in day out with a basket of hand pleated dumpling goodness. Get out of your comfort zone and try them too if you haven’t already.
The bad: During my first visit, I found the dishes lacked a bit of care. The three cup chicken, Sichuan aubergine and brisket missed the oomph and smoky flavours a wok can give. Take cook them for less on more fiery heat to give the sauce a thick depth like they deserve. Don’t tell them I said this, but the dumplings at Dumplings Legend are just a bit better.
Rating: 3.5/5
Would I go again? Yes
Address: 15-16 Gerrard St, London W1D 6JE
Web: N/A