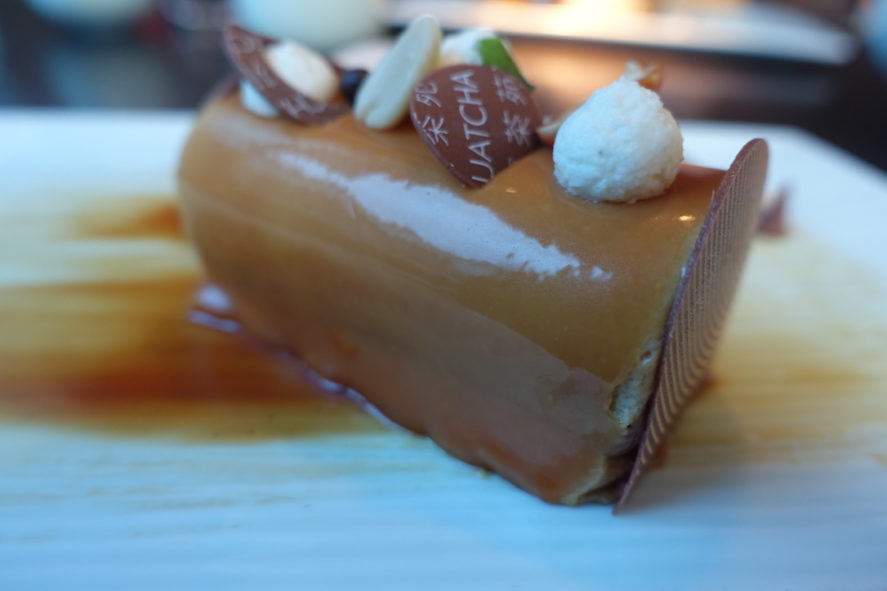 Dim Sum directly translates into “touch of the heart”, it smells of pure indulgence and makes my belly beckon with delight and certainly touches my heart. Did you know that dim sum was a snack designed for a bit of roadside nourishment for hungry travellers along the historic Silk Road? I couldn’t think of a better way to counter hunger. So Yauatcha City joins a handful of other eating holes at the popular (for the suits) Broadgate Circle. It’s the second outpost from Alan Yau’s Hakkasan stable and brings classy dim sum with matching service. It borrows many of the plush deign cues from their Michelin (ex) gonged Soho stalwart. There is a patisserie cabinet filled with jaw-droppingly good looking French technique inspired deserts – Cantonese accented of course as soon as you walk in to gawp at. Talk about good advertising, besides I couldn’t think of a better way to spend my time after a good gorging of posh Cantonese fare on company expense.

What’s good about this place is that they bring the condiments as standard. Not having condiments can be like brushing your teeth without toothpaste sometimes. I love the slinky pieces of cucumber that have the right amount of pickling and the rewarding umami their chilli oil has an abundance of.

Taro dumplings £6.50 were a celebration of how taro should taste – the true earthy notes were a caress to the tongue.

Edamame and truffle dumplings £6.90 were a revelation and I quickly grew an affinity to them. Whoever thought of this combo deserves a medal.

The chive dumplings £6.20 weren’t to be sniffed at either – inside the green wrapper were pert pieces of sweet prawn – the sea’s confectionary wonder.

I couldn’t fault the wagyu beef puff either £8.90. They had this multi-layered crisp pastry that evidently bloomed in the oven and there was a sumptuous sweet stew of wagyu within.

The classic “lo mai gai” £8.80 is glutinous rice with sweet pork and a preserved egg yolk. It’s a pleasing homage to a dim sum faithful.

Another classic that arrived was har gau £7.20 which were bulbous, cooked with flair and tasted great.

Chicken’s feet £4.80 deserved it’s place in the bamboo steamer as they came with a good whack of flavour as they should.

Strip loin cheung fun £9.90 was another triumph – it’s a posher take on the classic where beef is pulped with coriander and it becomes one with the silken pastry and sweet soy. This version uses slithers of beefy flesh.

We got some kai-lan too £9.90 as greens help you build biceps and they’re great here.

My dinner companion chose the yuzu rose choux £8.80 and reports back that it’s hitting the spot.

I opt for the raspberry delice with lychee £8.80 as our waitress talked me into it, I believe she was salivating when she was selling it to me. It was a good end to the meal, albeit a tooth-achingly sweet one! My dentist is counting the sterling already.

First up was were char siu bao £4.90 which I couldn’t fault.

Then came the soft shell crab £14.20 that were a riot of crunch, sweetness and savouriness. The crab in itself were great quality, fried with care and had a palpable whack of umami. The almonds, which I mistook for garlic, which was easily done, were the sort of snack that should feature in every bar in the country – they were that good.

Char siu cheung fun £7.60 with its perfectly translucent pastry and sweet pork were just peachy too.

Of course I had to get the chive dumplings £6.20 again.

As were the truffle edamame dumplings £6.90.

Curry taro croquette £6 arrived crisp, hot and another welcome riff on a classic which don’t come curried. I could have eaten them by the bag full.

Not ordering the wagyu beef puff £8.90 would have been a sin.

Wok seared beef ho fun £13.80 got a nice touch of exuberance with hunks of steak. I always find good ho fun gutsy and satisfying – this version was no exception.

Visit number three was breaking big news to one of my longest standing clients – what better way to tell them that you’re leaving your company of 12 years over a dumpling or ten.

Har gau £7, they deserve to be stalwart as they’re bloody good here.

Prawn siu mai £8 came with a base of minced pork topped with an all-but-tail shelled prawn, skilfully cut in a way where it could be shaped into a crest for the dumpling. The sweet on sweet flavours just blossoms in the mouth.

The chive dumpling £6 always features too.

What really caught me by surprise and perhaps was the best bang for your buck dim sum here were the Szechuan dumplings £5. I posted on my instagram that they were one of the top ten things I ate of 2017, I stand by that – they totally nail this one and have an unmistakable whack of of mouth coating umami, acidity and mellow heat.

Truffle edamame dumplings £6.90 are such a treat.

Another gem were the spinach balls £6 with minced prawn. This is where the kitchen do clever things like sub out the dumpling pastry for healthier, albeit less satisfying options. In fairness, it was quite tasty.

Things were back on track with lobster dumplings £10 which were majestic.

To finish off the ride we went for the salted caramel delice £9 – the goodness comes in blasts, there’s the crunch of peanut feullitine, with notes of banana and lime. Its a queen amongst deserts.

Trip number four involved a change in circumstances. It was a thank-you meal to someone to helped bring to life a branding concept for the new company I co-own.

We start with fun guo £6 which is a dim sum I hold close to my heart and it ain’t bad.

Har gau £8. I’ve ordered these on all four of my visits and they burst with freshness each time, they actually remind of the ones I had in Dumplings Legend. This is a good thing.

The venison puff £8 is practically the same as the BBQ pork puffs you get on a standard dim sum menu, but kudos to the chef for trying something different to please our palates.

The crystal dumpling £6 was filled with pumpkin and pine nut. It’s not a dim sum regular but I thought it was good.

For health purposes we ordered the spicy aubergine, okra, sato bean and French bean stir-fry £13. What really stood out were the sato beans, and from deeper research since our outing I’ve found out that they’re also known as ‘stink beans’. They have a very distinct sweaty bum crack note to them. The aroma is a ripe old sulphur fart from your grandad. Hats off to the chef for sourcing it and having the bottle to even put them on the menu.

Some token pak choi £10 for a not so token price.

The soft shell crab £15 has stayed consistent too.

Prawn and beancurd cheung fun £10 was a clever play on textures. Obviously you get those trademark pert prawns, but this time they get a double overcoat of crispy tofu skin and silken cheung fun wrapper.

The Szechuan wontons £6 were up by a quid since I had them last. But that’s the least of the worry, the skins lost their tautness and the sauce, oddly was insipid by comparison to my last visit. That was annoying.

The turnip cake £8 was something that I didn’t expect – they amplify the version here by giving it a good coating in egg and fragrant Chinese chives. It was comforting in a hip sticking way.

The wagyu beef puffs £12 are a regular order for a reason – they are reliably good every time.

When did I go? May 2017, Aug 2017, Oct 2017, Aug 2018
The damage: Expect to pay £50/70 per head with a drinks
The good: If you’re an absolute die-hard dim sum fan and fancy a splurge then come and play here. The feather in Yauatcha’s cap is the freshness and the care that’s put into the ingredients. Freshness is the key word. What really makes them standout from an ordinary dim sum house are the chef’d up deserts they have – they’re worth rhapsodising about.
The bad: I dined here not on my own dime but on what my expense bill could allow for, but that’s how I’d prefer to do it as the price they charge for some of the dim sum is probably an arrestable offence.
Rating: 4/5
Would I go again? Only on expenses.
Address: 1 Broadgate Cir, London EC2M 2QS
Web: https://www.yauatcha.com/city/