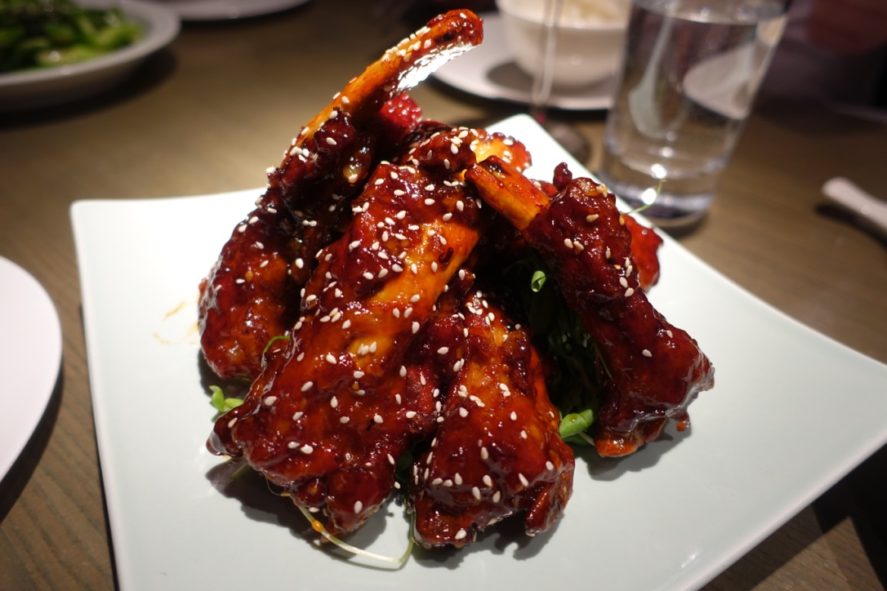 Hakkasan Mayfair, the sister restaurant to Hakkasan Hanway Place (2011), first started trading in November 2010. Within a year of opening it wins a trinket from Michelin and has kept it ever since. Hakkasan is a mini empire with its eleven locations worldwide and was founded in 2001 by Syra Khan and Alan Yau. It’s just off Berkeley Square and has a reputation for cooking posh Cantonese classics. The glamorous interior is fit for an oligarch, or a sheikh; their instagram feed is full of Russian looking chicly-dressed models with legs that reach the clouds and other members of the pouting contingent. Seemingly, it attracts those who spend a lot of time getting dressed! In my experience, rarely were the words ‘Chinese food’ and ‘glamour’ uttered in the same sentence. But now and in fairness, Hakkasan creates that mould for itself and its opulence is matched by surprisingly good food led by Hong Kong chef Tong Chee Hwee who is also known for cooking at Yauatcha which also has a Michelin trinket. Full disclosure – I didn’t come here from my own research, but was treated to this meal by my previous employer.

We all opted for the £78 “Signature Menu”, presumably its all their classics.

A cheeky little NZ number £57 seemed to marry very well with Cantonese cuisine. We asked them to keep it flowing.

A starter of scallop shumai, har-gau, Chinese chive dumpling, duck & yam bean dumpling was a big splash of freshness and a burst of clean flavours. Har-gau are quite ubiquitous but the rest were their own take on some dim sum stalwarts. Eating dim-sum is a love interest of mine and these were hard to fault.

Next up was a “salad of crispy duck, pomelo, pine nuts, shallots” and carefully picked sprouting leaves resembling the colours of Autumn. As advertised it delivers on it’s promise and its good to see that they weren’t cowardice by going down the standard pancake-hoisin-sauce-cucumber-spring-onion route with it.

Grilled Chilean seabass in honey is an upscale take on the fish. Generally you see them whole, treated with respect as standard in Cantonese restaurants. Here the pearly white fillets are marinated, then grilled until the protein sugars catch and brown on the buttery flesh. It’s genuinely good and you get a small mound of crisply battered wild mushrooms on top.

We also got a side of reassuringly fresh stir fried asparagus and garlic.

When the dino sized veal ribs arrived, everyone put their chopsticks aside and gnawed like no one was watching. Don’t judge as you’ll do the same. They were generously glazed in sticky, luscious Zhengjiang vinegar that gave buckets of mood-lifting sweet-sour-savoury notes so synonymous with Cantonese cookery that we all love.

Pipa duck was a crispy lacquered mouth-watering-miracle. The bird was expertly dismantled, leaving the soft flesh and fatless crisp skin on a single stroke of hoisin sauce. It all disappeared in 60 seconds.

Crispy fresh water prawns had their own appeal. They have a lightly battered exterior bestowing spring onion and dried chilli flavour that enhances the pert crunch of the prawns. Good prawns are mother nature’s confectionary gift to us, they seem to pick the sweetest ones here.

Checking emails between courses as you do.

The signature desert was a showcase of skills. A bullion of rich chocolate ganache was offset with a thin sheet of set chocolate that’s topped with piped raspberry coolie and chocolate done in the same way. The same garnish is a supporting act on the plate too with a rocher of raspberry sorbet. It’s stunning to look at and thankfully to eat too.

When did I go? Apr 2017
The damage: Expect to pay £100/130 per head with drinks
The good: So to a confession, I was genuinely sceptical and perhaps felt a some trepidation before I ate here as I thought it would be a wallet burning outing with mediocre food. It was a wallet burning outing with great food. If you’re like me (human), then sometimes you might judge a book by it’s cover – a shiny, sparkly one in this case. That moment is in the rear view mirror now, as under the hood there is brilliant work that gave some really good eating pleasure. Zenith moments were to be had throughout the meal, let’s take the veal ribs, or the pipa duck as fine examples, not forgetting those prawns and the signature desert full of thrills for the palate.
The bad: The elephant in the room is the price. If someone else paid, I’d be there in a shot. If I had to pull my wallet out then I might look somewhere else for more bang for my buck. So if you don’t mind letting your bank balance bleed then come here to play.
Rating: 4/5
Would I go again? Why not
Address: 17 Bruton St, Mayfair, London W1J 6QB
Web: https://hakkasan.com/mayfair/