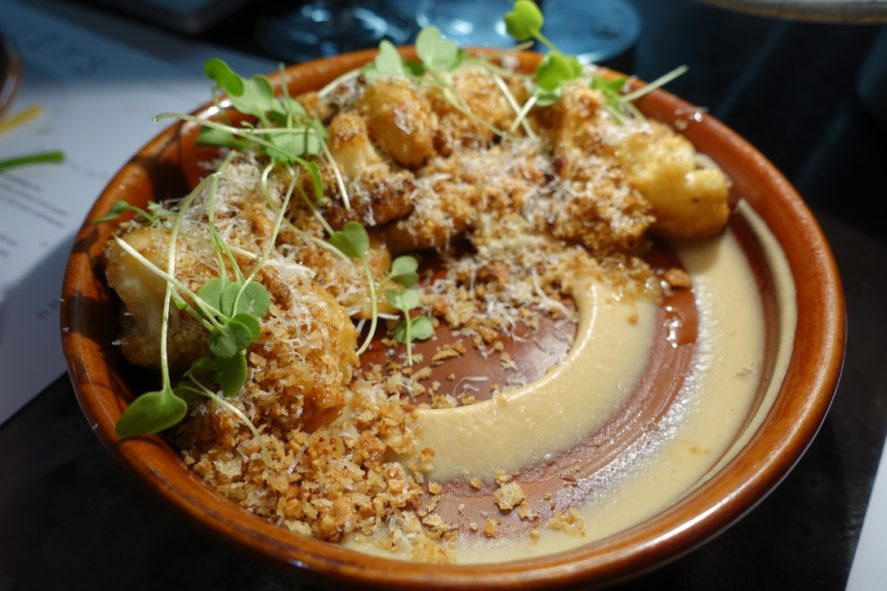 Foleys is the brain child of Head Chef Mitz Vora, a former sous-chef of the much lauded Paloma. He creates a menu that link arms with flavours from the Middle East, China, Japan, Korea and beyond. Subtlety isn’t his virtue. But what is? Combining palpable whacks of Asian inspired flavours that are novel for the palate. I’ll come back to that in a bit. I had fun in its 70 seater space, I’ve dined upstairs twice where there is a dinky little bar as you walk in, it’s suitable for a human that can double up as a barista and a bartender as there’s no space for more. There’s also enough distressed brick work that gives Shoreditch a run for it’s money. But downstairs is where I had most the fun. It’s counter dining on a steel topped bar that has everything – its where you can really get under the hood and see the culinary magic. I can’t think of a better way to dine as not only do you see the cooking, the chef’s bring the food straight to you.

We start of a snack of puffed lotus seeds on the house. Our waitress for the night, in fact I think she was the maitre’d, said they’re like spiced pop-corn. I couldn’t disagree.

A spiced pear mojito £9 came with apple rum, home made spiced pear purée, lime and mint. It was heart-burn in a glass. I’d left it after couple forced sips and decided to stick with the wine we had which our maitre’d totally nailed.

First up was agnolotti £11 stuffed with silken potato and punchy truffle. It has supporting acts of cauliflower florets, cauliflower purée, sprouting rocket, parmesan, hazelnuts for crunch. The umami, which is had splashes of came from soy and parmesan. It was my most loved dish of the night and the one that had me yearning for another visit. I can only describe the flavours as an umami hose down.

Chargrilled chicken burnt ends £6.50 is where an undulation of Korean flavours come in. It’s brined thigh meat caramelised with sesame and gochujang (I believe) that has gutsy sweet-savoury notes tempered with the zingy lime-forward dip it comes with. It’s was seriously awakening for the flavour receptors on the tongue.

A roll of grilled octopus £11 came topped with spicy pork mince and tangy house made sriracha, with that a smear of soot coloured black sesame mayo around the bowl gave moisture. It was another peachy creation.

After an indulgent lunch at Hakkasan earlier in the day, all I could manage was a whisky and ginger at the end this gastronomic shift, bloody hard life.

Outing number two. I came back as the place demands it.

Spiced sweet potato fritters £7, with a pastel yellow coconut and saffron curry was a dish I gleaned from my first outing as a “must-order” due to my suffering FOMO. I wasn’t disappointed. What they do well here is balance of flavour and with that good counterpointing texture. This was case in point with its grilled pineapple, cured red onions and crisply battered balls.

Chargrilled chicken burnt ends £6.50 were irrisistable the second time too.

From the meat specials £8 we got duck that was dark, caramelised, smoky and savoury. The home made taco it came with got a good dredging in the juices and could be picked up and eaten like a crispy cracker.

Corn flake crusted pop-corn chicken £9 sounded like it belonged in a stoners paradise. What you get is chicken thigh meat expertly rolled and coated in cereal and crispened, then it comes with accessories of pickled shimeji mushrooms, white onion, endive and smoky chorizo.

Fork tender pork belly £9 came with a mound of apple and swede vermicelli, butter milk, chopped roasted cashews and from what I gather savoury rice crispies! It’s testament here that there’s nothing wrong with using cereal in a dish.

The truffle potato agnolotti £11 was the dish I pined after, it’s so good that myself and my dinner companion inhaled one each. This time we got to see it being made too, this is why sitting at the bar is the best.

First of the deserts was a riff on a panna cotta £6. It’s coconut based, infused with lemongrass and had that all important reassuring jiggle. The goodness continued with a chilli and chocolate crumble along with semi dried lychees. It was the one to get.

We called it the night with their “Fatboy Elvis” £6. A warm sausage finger sized chocolate chipped banana cake with a good sploge of strawberry jam. The story continued with banana custard, peanut honeycomb and bacon crack – this was of course bacon flavoured popping candy. Both deserts were gone in less than 60 seconds flat.

My most recent visit was for lunch

Bajji crisps £5 were thick cut potato slices crispened in leek batter. If you like potato based snacks then you’ll love these. By design they are made for dipping into the tomato chutney and herby yogurt. My only quibble was that the chutney was a bit docile in acidity and they were cold when they arrived – twice!

Chargrilled cauliflower £8 came with tzatziki, coriander chutney, grated tomato and smoked peanuts. It didn’t have any fireworks but was a clear salute to the restaurant’s Middle Eastern virtues.

Korean BBQ chicken thighs £7 weren’t advertised as burnt ends this time, but it didn’t matter as all the great smoky, sticky qualities were still intact. What was alarming though was that they arrived tepid.

Here aubergine £9 was chargrilled until dark and melting. It was served on thick chilli lime yoghurt, date molasses, tangy feta and puffed quinoa. By comparison to what I’d eaten on previous visits, I found this dish to be conservative. There was nothing offensive, but it just didn’t make me happy. To the point of reminiscing about the magical flavour-stroke-texture combinations I’ve seen so far, this dish misses that brief entirely.

The grilled octopus £14 was another muted affair by comparison to what I ate before. A tentacle was rolled into a canon previously with sprinkles of deeply umami pork – it was a joyous thing to eat. This one was limp and didn’t have the same impact.

Things got better with soy marinated rib-eye and butter whipped spiced bone marrow. Pickled chillis and chimichurri went hand in hand with the mid-rare steak. There was even a charred crisp paratha singed with marks of the griddle, ready for wrapping.

Persian chargrilled lamb £26 were slices of deep fibrous flesh that fell apart as you chewed. They could be made into tacos with more of that charred crumbly layered paratha bread. Slinky pieces of pickled red onion, nutty tahini, and aubergine-tahini ketchup were the condiments at hand.

When did I go? Apr 2017 (twice) and Oct 2017
The damage: Expect to pay £50/65 per head with booze
The good: Mitz Vora brings to the table boisterous and high-spirited flavours to the palate and money couldn’t be more well spent. The evening meals I had just didn’t stand still, with lots of yearn-worthy dishes to be had such as they truffle potato agnolotti, pop corn chicken, chicken burnt ends and sweet potato fritters. These should be all signature mainstays! I found the service peachy and the kitchen staff full of charm and smiles.
The bad: My lunch meal seemed to be overshadowed by my previous nights out here. I was searching for wow-moments but didn’t get any. It seemed like the kitchen wasn’t operating at it’s optimum, perhaps these were misguided moments that I’m glad are in my rear view mirror. Maybe the kitchen comes out to play during the night only?
Rating: 4/5
Would I go again? Yes
Address: 23 Foley St, Fitzrovia, London W1W 6DU
Web: https://foleysrestaurant.co.uk/