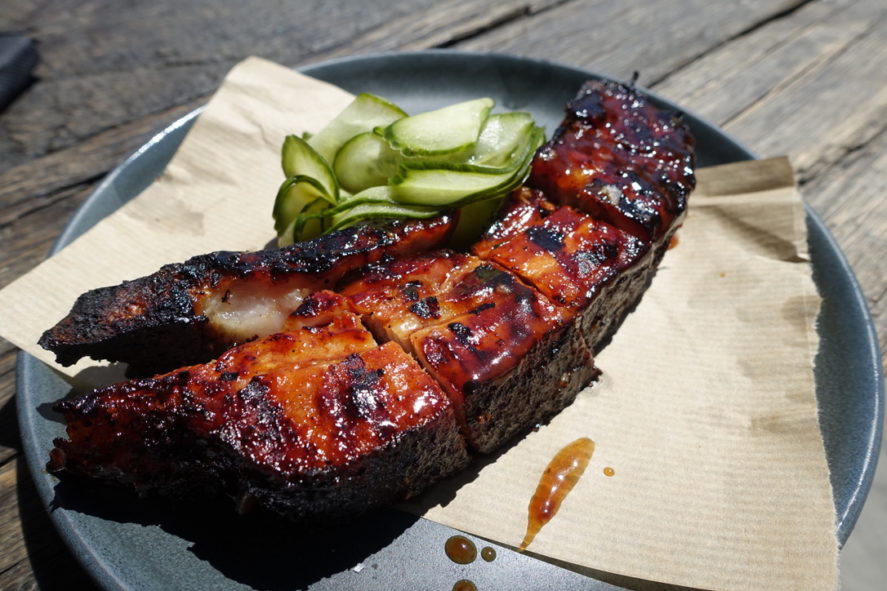 Smokestak is the brainchild of former Roka front of house worker David Carter. Before he opened the restaurant in 2016, he covered the street food circuit from Street Feast, Hawker House and Dinerama, expanding a cult following to what it is now. I was smitten back then and still am. In similar fashion to what’s advertised on the menu, the heart of the restaurant is stoutly focused on the fire pit. Burning embers are for all to see, the scent of slowly charring proteins perfumes the air. You’ll come out wreaking of smoke, but wreaking of happiness. There’s also blackened ceilings with matching pipes, stained walls, brushed steel panels and rustic oak tables with benches for seating. It’s possibly the most industrial looking restaurant I’ve been in and feels like we’re in one of the scenes of Terminator 2 – in the best possible way of course. I’ve been here few times now – something deep in my soul calls it out like a fog horn. I’ve had the opportunity to dine here a few times and it’s nothing short of brilliant.

Behind the studded door, there is a temple of smoked meat and a whole lot more besides.

The menu itself is so easy to follow with no foraged products that you need google the name of. And that’s not a dig at restaurants who do that as they are great all the same, it’s just not the point of an outing here. It represents blissful simplicity.

They turn pigs jowl £2.50 into bacon by way of curing and grilling it until the sugars in the protein are browned by just catching. It as difficult not to like the stuff, it’s the kind of bacon that will make the best sandwich, let alone a starter!

Crispy ox cheeks £4.50 (for 3) were the tough muscle of the animal stewed down with spices and lots of other good stuff. You get a ripe kick of BBQ with savoury and tangy notes, inextricably meshed with fibrous protein with the right amount of tension. There’s anchovy mayo too for dunking. I’d strongly suggest getting them.

Pig tails £4.50 were little things coated in a sweet soy reduction. We found ourselves gnawing around the bones extracting every piece of crispy skin. They were pure crack for the mouth.

Last of the first courses were sprouting broccoli tempura £3.50. Not for health reasons, but for flavour reasons as obviously they’re deep fried in seasoned batter until the flavours are intensified, the exterior is crispy and I’m happy. There is a dollop of spiced mayo for dipping too for extra exuberance.

The brisket £9.50 had the texture of something you could spread on, or have between your toast, it is utterly delicious. It’s where the restaurant flourishes and it does relentlessly. Its fatty unctuousness is balanced by zippy pickled chillis and the tang of the barbecue sauce.

The thick cut pork rib £9 is in essence, a slab of smoked belly and rib finished on the fire pit, then it gets a slathering of barbecue sauce. Think about the most unctuous pork rib you’ve had, multiple it by five and you’re about there. The token pickled cucumber, as nice as it is, would need to go to the gym and build up some muscles to compete with these ribs.

Grilled baby gem £5.50 is made extra rewarding to eat with its walnut gremolata, grated parmesan and crispy bacon bits. If in doubt add bacon.

Aubergine £8 was soft and luscious from the good roasting it was treated to. To amp it more it got a slathering of umami red miso, toasted cashews and nuggets of tangy feta cheese.

For the jacket potato £5, we were informed that spuds are shelled, then the skin is treated to fierce heat to harden it. It becomes then becomes a robust vehicle to carry a blend of 5 different cheeses, mashed potato, mustard and Worcestershire sauce. I wasn’t sure whether to eat it or bath in it. Both could work… at the same time. The skin gives a pleasing triple crunch that ricochets through your fillings – I could hear it throughout the the meal.

Plum crumble with condensed milk ice cream £6.50, albeit less impactful wasn’t to be sneezed at either.

What’s new this time around are the tempura patron peppers £3.50, which they’ve subbed out for the broccoli. Seemingly, the same batter is used as is the spiced mayo. Needless to say, they were positively revelling to eat.

What caught me by surprise in the midst of thinking about all the accessible smoked meat, was actually how good they do the stuff that didn’t have a pulse before. The wild mushrooms on beef dripping toast £7.50 is a case in point. It had so many of the deep savoury notes you can get from meat, and after eating it, I understood why people sub-out meat for shrooms. The sour dough, a mighty one at that was sodden in beef dripping and thick silky chestnut coloured gravy. Order it and see how good it is for yourself.

You cannot come here and not order the ox cheek croquettes £4.50. You’ll walk away with profound regret otherwise.

What also made an introduction was the 30-day dry aged beef with pickled chillis £15.50. Was it a thing to behold? Yes and a slow cooked melting fibrous one at that.

The smoke rarebit jacket potato £5 is a staple!

And for the purposes of vitamin consumption we ordered some charred greens, tahini and pomegranate £5. There’s something that happens when greens are cooked over fire – the flavour intensifies into tones of nuttiness.

The aubergine, it keeps getting ordered.

A friend ordered it – the brisket bun with pickled chilli which comes in two sizes. (£5 and £8.50). Did we have food envy? That’s a rhetorical question.

I’m faithful to this pudding as it’s that good. Despite all the rich offerings consumed, space is always found.

If you prefer something lighter, and by no means is it light, but it’s all the more great for it, then order the salted caramel ice cream with hazelnut praline and toffee popcorn £4.50.

Visit Number 3 involved dining with clients.. Smokestak is proof you that all you need is substance to impress not a hefty bill.

Padron tempura £3.50 – the vegetables may not be on the main stage but they deserve a place as a very strong supporting act.

They were inhaled without hesitation.

The brisket buns are nine napkin jobbies, but will reward you endlessly.

I’d be lying if I said these weren’t my favourites from the mains.

Whole roast mackerel with gooseberry and lime salsa £12 is also available for those who don’t want to be here, or if they deem fish as their vegetable intake. We’re of the latter.

The charred greens make another appearance. Everyone approved.

The meal wouldn’t be complete without these.

Of course we ordered it.

What actually caught me by surprise was how good this delectable mess was. It’s not going to win any beauty pageant contests but it makes up for it in taste. It was actually a glorious slap dashery of lemon curd, pistachio biscuit and rhubarb granita £6.50.

I figured that the salted caramel ice cream should feature too so everyone can try the whole offering.

On this visit there were seven of us, they sat us on one of their bench tables. On either side you could comfortably fit two average sized adult males. There were three of us on either side, with one on the end – we’re a sizeable average, I’m talking muffin tops, a whole lot of jiggle and lumps of gym-honed muscle thrown in. I wouldn’t recommend being squished. They do have a table on one side of the restaurant that by eye could take ten, so bear that in mind when booking. A set menu is only available for bigger group, but it looks like all the greatest hits.

Pardon tempura are perfect for nibbling on.

Ox cheek croquettes with anchovy mayo are always a delight and are a compulsory order.

Brisket buns with punchy pickled chillis – arguably one of these with a side would be enough to fill a hole. But that’s besides the point, you have to keep going with your sleeves rolled up and ignore the sweat dripping off your brow and splashes of sauce hanging off your ear lobes.

Corn on the cob takes on a different personality by being fired over wood and it gets a good glaze with miso butter. Crispy shallots become friends with it too – everything just works.

A diner dropped a hunk of jacket potato into his glass of water. Numpty bollox.

To end the ritual

Visit number 5 was a lunch visit in the scorching sun, entertaining a client.

These are a reoccurring theme that encourage endorphins. They’ve gone up by £1.50 though since my last visit though.

The messy but riveting brisket bun – it’s only gone up 50p from last year.

Pig tails were as glorious as ever.

Just got a little taster – our waitress was happy to get us half a portion.

Hispi cabbage was cooked over wood, naturally. It came with a pleasing chickpea purée and hunks chorizo £5.50. I said that they do things that once photosynthesised good here, I stand by that.

They cannot be avoided, as they are relentlessly succulent and every carnivore needs them in their life. But it has gone up to £11.50. Still worth it though!

When did I go? Mar 2017, June 2017, July 2017, Aug 2017, June 2018
The damage: Expect to pay £40-50 per head with drinks.
The good: There are so many highlights at Smokestak such as the pig tails, the ox tail croquettes, the jacket potato (which could easily be a meal in itself), the pork rib with fat that is crisp and melts – that’s without even reaching for the luscious deserts. It’s a place which aims to proactively please at a cost that encourages you to go back for more. Ok, I know there are more established barbecue joints out there and others might have other opinions, but Smokestak has become the reliable familiar for me, hands down it’s gorgeous. It’s barbecue that will knock your socks off.
The bad: There’s not a lot to grumble about despite smelling of bonfire when you’re done.
Rating: 5/5
Address: 35 Sclater St, London E1 6LB
Web: https://smokestak.co.uk