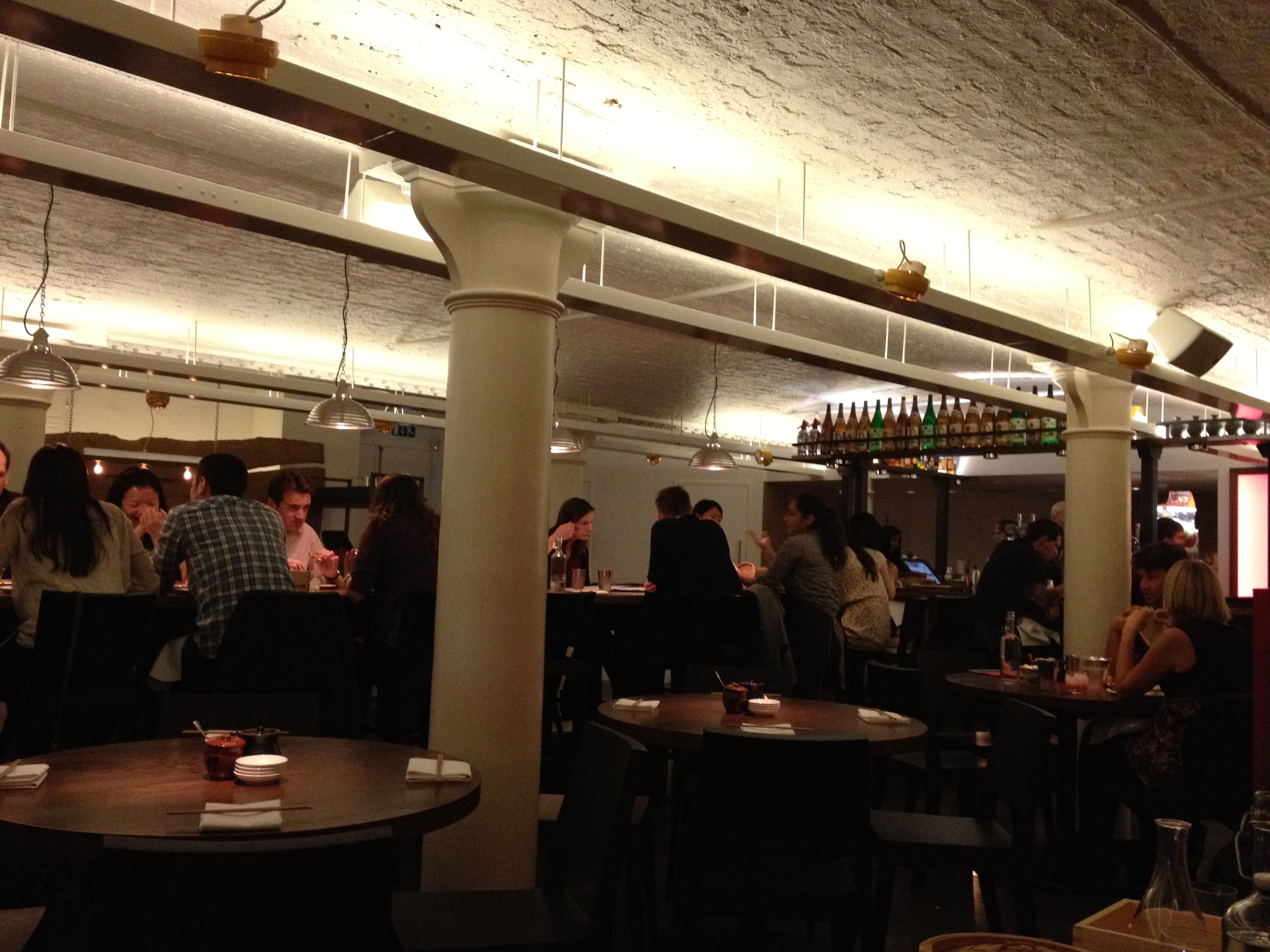 After hearing that hirata buns were the headline, I couldn’t wait to get down to the Flesh & Buns basement in Covent Garden to stuff my fat face. This is the second chapter from chef Ross Shonhan, more famously known for Bone Daddies ramen bar, which rubs shoulders with likes of Tonkotsu et al over in Soho. The chef/owner is formally of Zuma and Nobu, so he knows a thing or two about modern Japanese cuisine.

The feel that best describes this place as I walk in is well, kinda like Bone Daddies, but on a larger scale, think shabby industrial chic and you’re about there; Soft 80’s rock anthems blare in the background, with a fun/casual small plate experience and decent sake’s at your disposal, you really can’t go wrong in the current foodie scene. There are a myriad of dishes, from sushi, sashimi, tempura, yakitori and some fun deserts (my meal was sans pudding as I was saving room for Shoryu ramen!). Check it out; To kick things off we went for the eel cucumber roll and softshell crab roll, which are a delight, but at £10 and £9 respectively, it’s pushing into Zuma and Nobu territory, sadly it doesn’t warrant the price they command. I’m here for the hirata though, for those in the the know, an explanation isn’t necessary, but those who aren’t, they are steamed, fluffy pockets of sweet dough made for filling stuff with. Their clam-shell shape is formed with a simple fold of the dough before going into the bamboo steamer, are also brought to your table with the ‘flesh’ of choice. The family on the other end of our table ordered extra buns that arrived within a couple of minutes which I thought was a great selling point. The flesh we opted for was the braised pork belly and grilled sea bass. Here is a pic of the bass. The flavours were lovely, crisp skin with hints of sweet miso, with a side dish of kimchi and tomato salsa – purist might disagree so look away! At £14 a pop it really lacks bang for you buck – but this is Covent Garden remember? Here is the braised pork with a condiments of mustard miso and slices of pickled apple. It was the perfect accompaniment for those little fluffy steamed pockets of joy. Juicy, sweet and just damn good. The damage: Expect to pay £35-50 per head with drinks
The good:  I enjoyed my time here, the hirata themed hipster joint that plays rock anthems and messy hands on style dining is the sweet spot of fun, you’ll even get a wet towel at the end for a good old wipe down. I’m glad I’ve ticked this one off my list and it will probably warrant another visit at some point.
The bad: I would suggest going in a group of 4-6 of you though, to get a decent side table or similar to avoid sharing with random diners, avoid the long central bench though, unless you don’t mind being on exhibit and elbow to elbow with fellow hirata scoffers.
Rating: 3/5
http://fleshandbuns.com
41 Earlham Street, WC2H 9LX
020 7632 9500