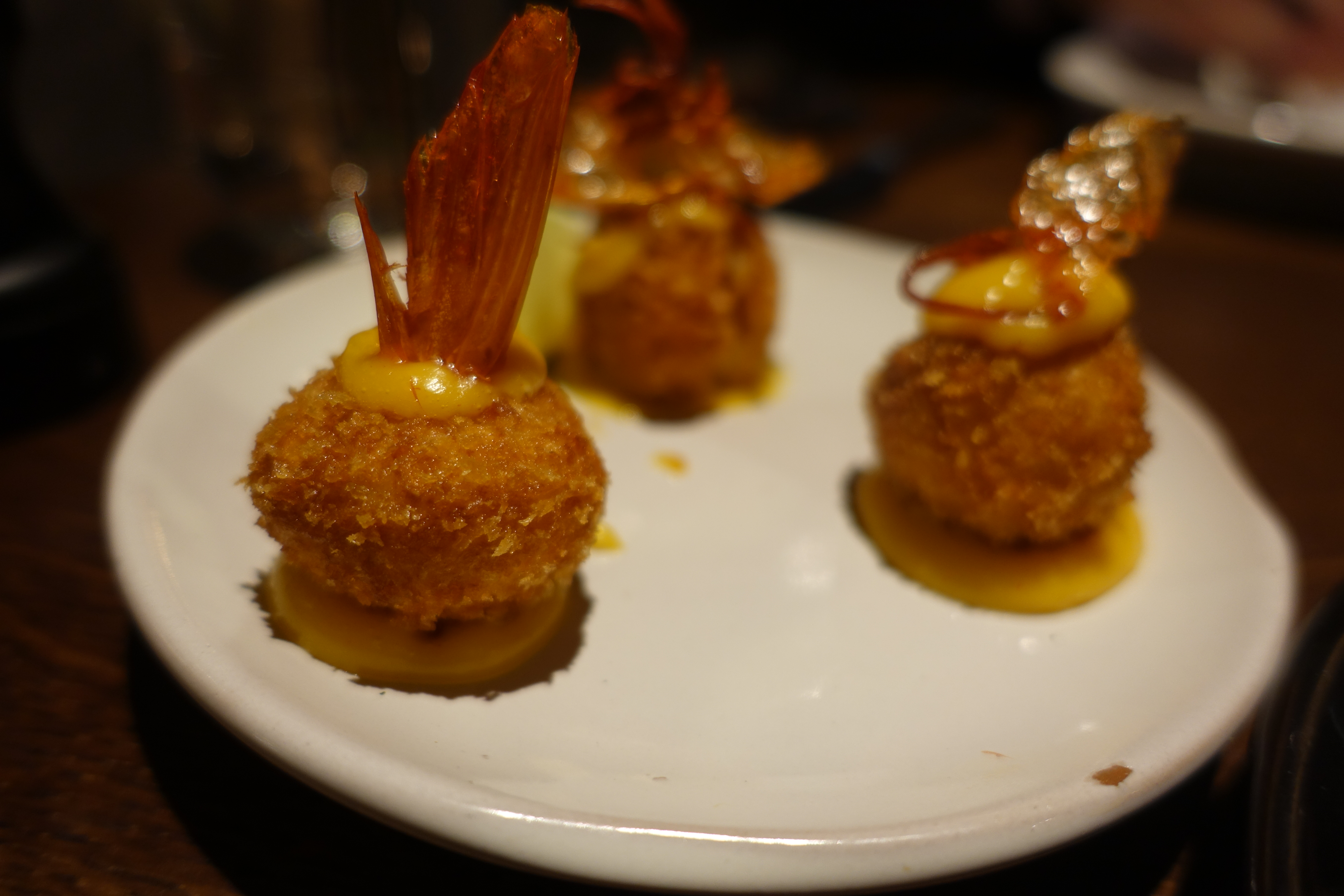 I’m yet to visit but the squad behind Manicomio who have restaurants in St Pauls and Chelsea have headed to Spitalfields for their 3rd uptake of modern Italian cuisine. They open on the 28/9/15 with Head Chef Tom Salt at the helm who trained at the River Cafe, Zeffrano and did a stint at Manicomio before coming to the 140 cover Canto Corvino. Being designed by the team behind Roka, Gymkhana and Bubbledogs, aesthetically it holds some clout too. Don’t worry though it’s not style over substance, it has both. There’s a josper grill made for flame kissing things that once had a pulse and stylish cocktail bar designed for lingering too.

The bar serves Italian inspired cocktails and you’re hit with it as soon as walk through the doors. In the dining area for all to see, there are well oiled open kitchen theatrics, running like clockwork. The menu format is easy to follow with sections for antipasti, the meats, pasta’s, ‘from the grill’, fish, deserts and so on. We kick off with the Valpol Nicolis (£33.50). A deep ruby Valpolicella which is nutty and fruity with dark plums. First up from the salumi section we have the Cullatello De Zibello (£10). Salumi cut from the hind leg of the animal, it’s aged so well giving an intense flavour. Pugliese burrata and anchovy toast (£7). As you’d expect from a decent burrata, it’s fresh and intensely creamy. Nowt wrong with this little plate but perhaps it was over-shadowed by the other dishes. Lamb ribs, smoked aubergine & sesame (£7.5). Damn this was good, fatty smoky ribs with a thick umami glaze – my fellow diner mentioned it was akin to a sweet, savoury teriyaki sauce. I couldn’t argue with that. Use your savoury, pillowy foccacia bread to mop up the sauce, it’s like gold! Sicilian red prawn, tomato and chilli arancini (£7.5). Crowned with it’s crispy shell, the little croquet is crisp on the outside and filled with robust prawn flavour in the rich roux centre. Blood sausage gnudi ‘Amatriciana” (£10). I particularly endorse this plate of food, it’s a must-have dish to order when coming here, as it tastes remarkable. The sauce is savoury, yet sweet/tangy and the umami comes from the alluring blood sausage. Crab linguine (£16) was on the specials – I had to order it as crab is possibly my favourite shellfish and linguine being my go to pasta, it made sense. It didn’t stand out though as it was a plane Jane in comparison to everything else – my fellow diner felt the same and referred to it as ‘watery’. I resonated the same sentiments. Negroni (£9.5) – a rudimental thing when considering Italian cocktails, invented in 1919 by Count Camillo by in Florence, at Caffè Casoni, ex Caffè Giacosa, now called Caffè Cavalli. Count Camillo invented it by asking Fosco Scarselli (the bartender) to add some clout to his favourite cocktail, the Americano, by using gin rather than soda water. The bartender garnished it with orange rather than lemon zest to differentiate it from the Americano. When did I go? Mid Dec 2015
The damage: Expect to pay £60-£65 per head with a cocktail/bottle of wine.
The good: It was a seriously good dining experience here in a great space; the lamb ribs, Sicilian red prawn, the Cullutello De Zibello and of course the blood sausage are must haves – the latter in particular if you don’t want to miss out! It’s worth mentioning too that I managed to secure a booking at the last minute during a crazy Xmas period thanks to a front of house member of staff called ‘Natalia’ who managed to shuffle tables around to accommodate us in an already full house.
The bad: The crab linguine was a let down considering it was in the ‘specials’ and at a hard £16 price point too. Avoid.
Rating: 4/5