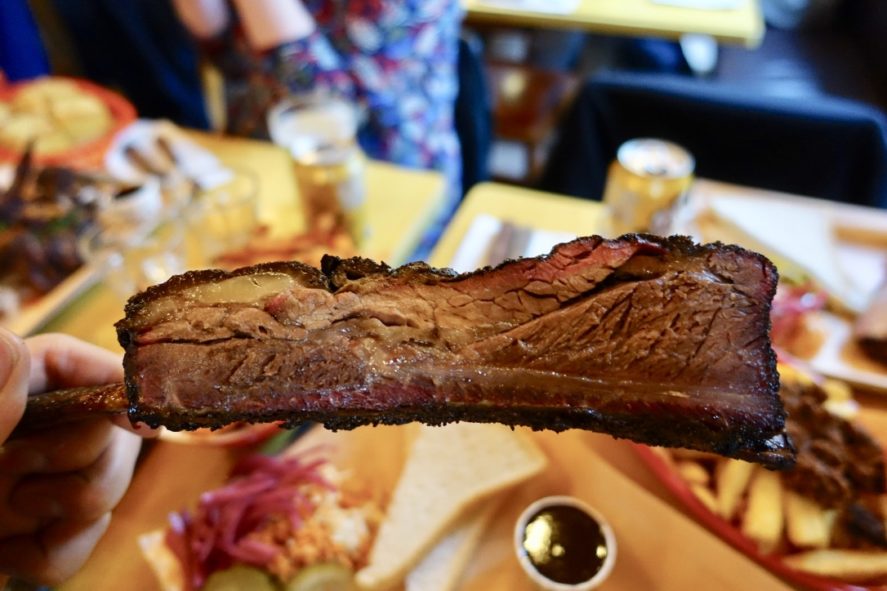 London right about now a place where you’re guaranteed a decent bit of barbecue. Texas Joe’s, a stone throw away from Borough Market, is one potential avenue you could explore. Founder, Joe Walters, isn’t a pioneer of barbecue as such but he brings his own interpretation to SE London. What you get is an array of carefully sourced animal parts from Nathan Mills of The Butchery, which are allowed to linger in a giant rotisserie, so the proteins break down and are perfumed from burning embers from the London Log Company. Joe, a Texan himself once featured on the Dragon’s Den to promote his beef jerky which I am a huge fan of, he’s often seen in the bright walled restaurant that is filled with black and white photos, taxidermy, battle paintings and shouty paintwork. On the outside you should see a big white Cadillac that just oozes presence.

We start with chicken wings £8 which gets an overcoat of spice before being left to mingle in the smoker so the ingredients get to know each other. The flesh from the wings take some jaw effort to prise off the bones, but the flavour makes the admin semi-worth it.

Then arrived the fries smothered in chilli £5.50. Each chip was as wide as a brick-layers fattest digit. They were semi-hollowed like a canoe so the fibrous brown stew of chilli could scooped and transported into our fat mouths. They were hilarious to eat and worth coming back for alone.

Although less fun, the sweet potato fries £5 were great in their own right, nicely crisp with fluffy centres.

Then came the short rib £22. Visually it looked accomplished with a dark bark exterior and edges of pink along the iridescent flesh – cracks appear where fat once lived that had rendered out to impart his flavour. It was accessorised with token slithers of pickled red onion, gherkin coins and a meek slaw – there were also forgettable stale triangles of pointless white bread. Although it was aesthetically striking, I found the rib to be just one noted, it seemed under seasoned and was crying-out for some acidic sauce. Dare I say it too, it tasted a bit parched.

“Belly” £14 are advertised as sourced from Waveney Valley in Norfolk. They were generous slabs of pink flesh with an interplay of melting fat – lots of it with a mahogany coloured skin. It also came with processed white bread, slaw and a barbecue sauce that was way too underpowered to even tickle the swine. Similarly to the rib it didn’t really shout of anything memorable, thus didn’t leave a lasting impression.

Craving carbs, we then ordered corn bread £4. I believe the last time I had some was at the now defunct “The Lockhart”. The stuff they served was ripping hot from the oven, had the sheen of honey and butter which was bubbling out from its own skillet, it was a thing of profound delight. This version was of profound regret – it tasted like it was sunned in the Texan desert until every drop of moisture was taken from it. Even the melted cheese couldn’t revive it, I’d skip this one.

Things got better with mutton ribs £12 which had a lovely spice crust and just the right amount of crisp fat vs protein ratio. They were perhaps the best of the “bone in” offerings.

The triple porker £18 from the specials board was a pork chop stuffed with a manner of all things dreamy. Inside the spice crusted hollowed chop, there was spice, peppers, herbs and other pork parts to make it really sing. Moisture and luxury was added to each mouthful with a single slather of buttery mash. It was the dish that made the meal.

When the brisket £16 arrived we found it fibrous and taxing on the jaw. This kind of defeats the object of barbecue right which should be yielding? Perhaps, it required slicing against the grain to make it more enjoyable. More of that processed white bread reared its ugly head too. I’m such a bread snob, big sigh.

When did I go? Apr 2017
The damage: Expect to pay £40 per head with booze
The good: Texas Joe’s story is endearing, he’s clearly doing something he loves and the place has it’s own personality. We had an unbuttoned, sleeves-rolled-up fun night out, I’m sure you’ll have the same. Texas Joe’s can give you belt-undoing-eat-till-you-burst antics at a wallet friendly prices as it should for BBQ.
The bad: In spite of the of the joys of over-eating, sadly, there were no show-stopping moments at Texas Joe’s – it just ended up being a box ticker than us waking away as regulars. For the same money and many more thrills, I’d rather head over to the East and consume my bodyweight in delights at Smokestak.
Rating: 2.5/5
Would I go again? Doesn’t every restaurant deserve a second chance?
Address: 8-9, Snowsfields, Bermondsey, London SE1 3SU
Web: https://www.texas-joes.com