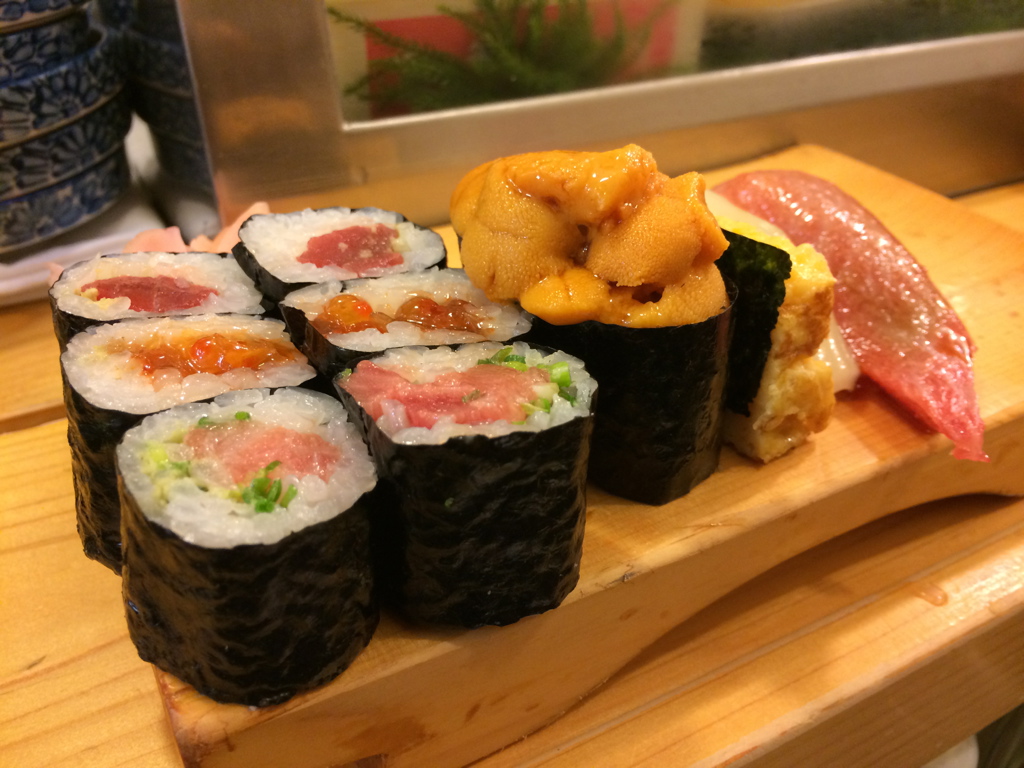 Tsukiji is Tokyo’s main fish market and it’s the largest of its kind in the world, with over sixty thousand workers keeping things well oiled. Tsukiji is split into two parts – the outer and inner markets. The former is an array of streets, some obvious, some hidden and are packed with many things to eat. The latter is where the famed wholesale auctions take place during the early morning hours, when huge tuna worth ¥millions are traded daily. We headed to to much revered Daiwa Sushi and at 4.30am, an hour before opening there was already a queue of hungry enthusiasts. The chefs were a super friendly bunch making use of whatever broken English and limited vocabulary they had to put smiles on our faces. The kitchen quarters are compact but the restaurant stretches over into 2 parts with a good amount of seating. There is a full menu with a variety of dishes but we opted for the set-meal costing ¥3500 (£23-£25) which comprised of miso soup, tuna (normal-medium fatty), shrimp (cooked & raw), uni, tamago, squid, eel and some tuna rolls.

Remember the ginger is a palate cleanser kids and not to be eaten with your sushi, but in between each mouthful! Miso soup was on point and made even more delectable with the baby clams on the bottom. Medium fatty tuna, it was so good it re-calibrated my entire view on sushi, the tuna just melts in your mouth and the flavour just coats your tongue. Flipping gorgeous. Cooked shrimp and tuna. The shrimp is as sweet and fresh as it could be along with the buttery ruby red tuna was profoundly superb too. Although I appreciated it’s unique crunchy texture and sweetness the raw shrimp brushed with soy was my least favourite. The thing was so fresh that the flesh was still twitching when it arrived! Nothing is wasted here – the head part of the prawn is even served to us. Happy days! The uni here is creamy and rich with the custard-like consistency.  I’m generally not a fan of the stuff and yes that may be blasphemous in some peoples eyes, as I’ve had bad iodine forward ones’, but these were good and I really didn’t mind eating it at all with the set-meal. Tomago was sweet and fluffy and the squid, well it’s just raw squid but probably the best raw squid I had. A selection of tuna rolls, medium, spicy and fatty seasoned with raw spring onions. They were so soft and lush, I was smitten after the first bite. I loved this dish and I believed it loved being eaten by me too! The eel brushed with that unagi thick soy reduction felt like my signature sushi and it’s always my go-to.  It came with less sauce here so you can really taste the buttery richness of the eel. The yellow tail tasted clean and and was a one bite wonder.