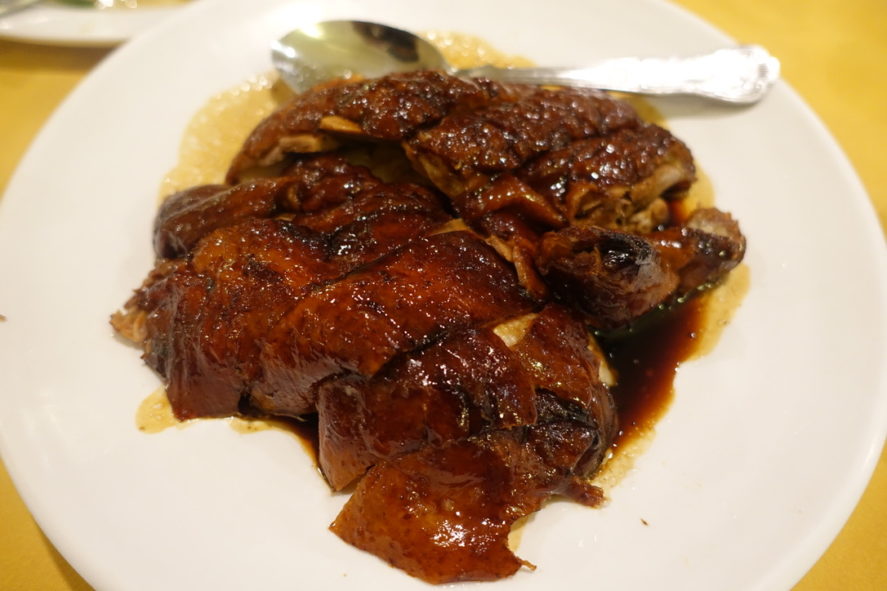 Four Seasons is a Chinatown faithful who champion the virtues of Cantonese roast duck; they really do get behind theirs as some of the best London can offer. After some digging around online and by word of mouth, it seems to be coveted by lots of devotees out there. I pinched this from their website: “The famed Four seasons’ roast duck has been lauded by the UK edition of the Financial Times as ‘the best roast duck in the world”. So to test it out I’ve come to the two floored simply-hewn OG Chinatown shop at 12 Gerard Street for some quack action. There’s upholstered chairs with matching carpets which is probably the same colour scheme from 90s when they first opened. Low magnolia ceilings were probably brilliant white once upon a time before years of duck grease got to it. I call it a joyous patina. The restaurant’s USP of having an alluring array of hanging meat such as roast pork with the darkest bark, soy chicken and of course that roast duck that’s butchered to order.

It’s hard not to love mainstay condiments in Chinatown.

Morning glory £9.80 Malaysian style is my kind of dish especially when it’s cooked with scorching wok heat like this, is a good lip smack of fermented shrimp funk, heat, crunch and umami.

The Sichuan braised eel £19.80 is shamefully an unrecognisable red gloop of sorts that is probably has the similar appearance to the commonplace ‘sweet & sour’ you get from your takeaway, only the shredded carrot and mock birds nest detracted from the bright mess. Furthermore, it takes an awful lot of skill to butcher an eel, removing its oily flesh from the intricacies of its skeleton, it’s just a shame it’s tooth-achingly sweet. Eating it was a battle for my fillings and an invoice to the dentist.

The honey pork, albeit cooked beautifully and was tender as can be, it was again a cacophony of nothing but tooth-shatteringly sweet. It was on a bed of Chinese cabbage with a nice crunch and a puddle of soy that also took a trip to the confectionary shop and landed on our plate.

So onto the duck £14.40 which we ordered half of, boneless too since the audience didn’t fancy the admin of gnawing on bones, it was actually the star of the meal. The flavoursome flesh was silky, and the caramelised umber-tinged skin tasted really bad for you – mission accomplished I’d say. The restaurant has a noble duty to cook this bird well and it does. Ok, so the sweet soy it came with was a tad cloying which seemed to be the theme of the meal, but it won’t take a lot to adjust that.

When did I go? Nov 2017
The damage: Expect to pay £30/40 per head with drinks and lots of food.
The good: Not to beat around the bush, I’m going say just come for the duck and morning glory, if I was a betting man they probably do other vegetables really well too. So get your quack and greens here – you can thank me later.
The bad: The sweetness of most of the dishes we ordered will compete with the best rhubarb and custard your confectionary shop will have.
Rating: 3.5/5
Would I go again? Yeah just for the duck and morning glory.
Address: 12 Gerrard Street, China Town, London W1D 5PR
Web: http://www.fs-restaurants.co.uk