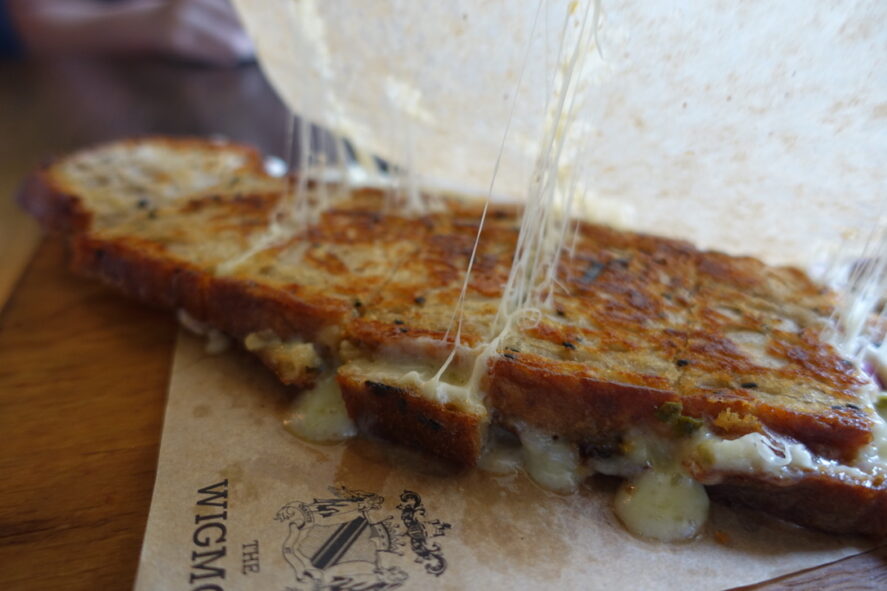 In the summer of 2017 something really special happened on Regent St, the end towards Regents Park away from the bustle and sharp elbows of tourists and it’s called The Wigmore. In my eyes, it’s the Mecca for heart-stoppingly good food with a menu which is small – it’s merely a list that contains a manner of things perfectly judged and with a stodge-led agenda. Mainstays are deftly yet rustically done; let’s take the unmissable Bloody Mary chips as a class example or the XXL toastie or the masala spiced scotch eggs. I order all of the above every time – to myself. Its all overseen by the illustrious chef Michel Roux Jr and what you get inside are glossy emerald green walls, dark wood flooring and a hanging chandelier that looks like a half eaten bunch of grapes. I jest with that elucidation – the former bank is actually a fine place to huddle and eat. Within the main hall there is a cocktail bar managed by bartenders’ gilded with gongs, of course there’s beer on tap, most are a nod to small batch breweries. They’re friendly on sports so expect all the big events being screened.

I always go for the Wigmore Saison £4.50, it’s a cloudy sort that always hits those crisp, fruity notes and goes brilliantly with the grub.

The XXL stovetop toastie £9 isn’t just impressive in size, its also impressive in flavour. Four different cheeses are grated then mixed with chopped red onion and gherkins so they become one. The whole business is piled on thinly sliced sour dough that gets a smear of hot mustard to stop the whole lot from cloying before its toasted on the plancha. Its a foot-long-super-nova of hip sticking deliciousness that gives me profound delight every time I eat it.

The masala spiced scotch eggs £5.50 look like sea urchins and are one of the highlights. The outer coating which are made of crispy noodles are wrapped around herby sausage meat and a runny centred quail’s egg is at the core. The “dahl’ relish it comes with is armed with a subtle breath of spice but with bucket loads of umami. We scooped and dredged the lot into the dahl and inhaled.

The rabbit, veal and cep lasagne £29 that comes in a skillet is made for two, but I could have easily done the lot to myself. Everything about it was hearty, full of heft and the sticky meaty jus had all the savoury depths you want from such a compelling autumnal belly warmer. If that’s not enough for you, there’s a fresh from the oven crunchy wedge of a sour dough baguette drenched in garlic-herb-butter.

The Bloody Mary fat chips £4.50 are a celebration of the spud, and a definition of how a death-row chip should be. The bloody mary salt pelted exterior has a crunch that stayed with me for the whole afternoon and the centres have a fluffiness that all chef’s should try and replicate – they are a humble spud elevated to a luxury item with the addictiveness of crack. Proverbially speaking of course.

Visit number two involved introducing the boss to The Wigmore and I arrived in a mood to undo all my hard work in the gym by subscribing to manner of cookery that brings excitement to my fat mouth, the Wigmore is perfect for this.

The bartenders know a thing or two about mixing up whisky sours too £10.50. This is their riff on that very drink a “brigadoon” which contains a good amount of Balvenie Caribbean wood, lemon juice, apricot brandy, orgeat Adam McGurk and The Player 2010/11. The point I’m making is that the cocktails here are stellar – it’s no wonder since it’s the same stark-styled folk from the globally acclaimed Artesian next door make them.

They also do plonk by the carafe in case you can’t bosh a whole bottle.

….And the masala spiced scotch egg with dahl relish £6.75. Although the egg wasn’t judged that well this time, its over-doneness didn’t detract from its deliciousness.

I easily lose myself in the moment when the fat chips with Bloody Mary spice £5 come to the table.

I came back in the summer of 2018 to entertain the outlaws as The Wigmore is a place where you can fulfil these duties.

Fat chips with Bloody Mary salt – it’s the best £5 you can spend in London right now in honour of the spud.

The XXL stove top £9.75 was the best the mother in law had apparently.

One item I saw on the menu for a while was the coronation chicken roll £14 with spiced coleslaw and butter milk onion rings. With his umber-golden crumbed chicken breast and toasted brioche roll, it looked like a sandwich to be reckoned with!

What I got to try was the butter milk onion rings that totally knocked my socks off. What you get is this crispy armoured batter full of craggy edges with an echoing crunch – the melting onion within becomes one with this marvellous coating with a really pleasing chew. I shall call them the best onion rings I’ve ever tasted.

This was a birthday visit with with my siblings in tow.

They do a plant based vegan burger with red pepper relish and saffron emulsion. It’s yours for £14 and designed for those who have a conscience about eating too much meat – a conscience that we all should have.

For those with greed for flesh, (that would be us) then go for the beef burger £14 with grilled ox tongue and crispy shallots. A patty gets a smothering of melted cheese, a special sauce and crisp slithers of tongue that makes itself known for being like crisp salty bacon. More salinity comes from gherkins on the side, quartered and sliced length ways. The vessel is a buttered seed pelted bun with a good amount of sqish.

The coffee is good here too

Not ordering the masala spiced scotch egg £6.25 would be ridiculous.

These are the aioli blobbed smoked chicken croquettas £5.50 that Barrafina would be proud of. They seem to do fried things very well here.

Here’s their cheeseburger £14 again – it’s waist thickening and will sustain you through the harshest of winters. Some may call the grease left behind on your fingers oily, but some may call it luscious. I’m of the former.

They also do things with fish such as roasting Cornish cod £16 until the skin crispens and is placed into a pool of pesto sauce with bobbing plump mussels and short pasta of sorts to soak things up. Truth be told I had to force this one down to avoid waste – I hate waste. The sauce was just too one-noted and my palate didn’t want to gel with its musty tones.

Even with a limited menu, I can’t think of any better way than have a post-lockdown meal here rapidly inhaling what they do best.

The smoked chicken croquetas with aioli £5.50 were just as good as last time.

The definition of a compelling chip are the Bloody Mary fat ones right here in The Wigmore.

When did I go? Too many times to list
The damage: Expect to pay £30/45 per head with booze
The good: The Wigmore is a venerable pub that does a lot of things very well, don’t miss the cheese toastie, Bloody Mary chips or the masala spiced scotch egg – doing so will mean missing the whole point of the outing. It’s a place where you need to come not for a pint of the beautiful Wigmore Saison but come armed with an empty stomach for one of the best feeds London can offer right now.
The bad: There is nothing to whinge about.
Rating: 4.5/5
Would I go again? Coming here is part of my intrinsic skillset
Address: 15 Langham Pl, Marylebone, London W1B 3DE
Web: https://the-wigmore.co.uk