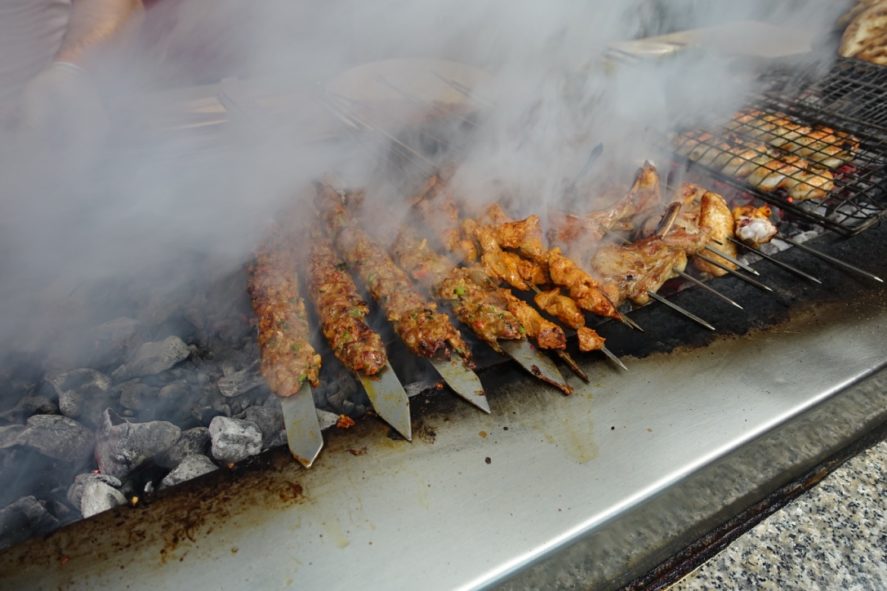 Ali Dirik, the owner of Mangal 2 came to London in 1987, and couples-up with another Turkish chap. Together they open up Mangal Ocakbasi in Dalston. Their schtick is big-hearted food cooked on the ‘ocakbasi’, a charcoal hooded BBQ that takes centerstage and bellows smoke like a Big Boy steam locomotive. Then in 1997, Ali opens Mangal Ocakbasi 2, a stone throw away and parts way with Mangal Ocakbasi. The newer venue seats more, with a bigger ocakbasi where a good selection of things that once had a pulse gets that slow-cooked lick of charcoal goodness. Ali’s son who served us for the evening mentions on his Munchies interview, an “alchemy, you have to get the right balance and the right feel for it, you have to make sure you don’t do a Jamie Oliver, bish-bash-bosh, bobs’s-your-uncle, smash-cook, that approach it’s not for kebabs. You have to feel the charcoal, feel the heat and manage it”. I’m not sure if Mr Oliver will agree with that! Expect a brightly lit room with magnolia ceilings; custard yellow walls; dark wipe down tables with matching wooden chairs. And of course, an ocakbasi billowing smoke. If you’re lucky you might bump into a prolific pair of artists called Gilbert & George who pretty much dine here every night, we did.

First up came the patlican tava, a cold meze of chopped aubergine in tomato sauce, green peppers, spiced yogurt £5.45. It slid away nicely when scooped with the hacked up pieces of chewy coal-cooked flat breads.

What I really bonded with was the “lahmacun” £3.95, a cracker thin crisp bread, spread liberally with spiced minced lamb and parsley. On the side you get a lightly soured salad that can be sandwiched into the bread. I prefer it as it is to keep the flavours bold and uncompromising.

Halloumi cheese £5.95 was all about the squeak and chestnut coloured char from making friends with the ocakbasi. They seemed to go down nicely too.

The “kerides kebap” £14.95 were headless prawns, their sunrise orange shells were blackened in parts forming a resemblance to leopards jacket. Despite their charred-ness, the pert flesh still had a nice bounce to them.

Having barely any room for the main event, we still hunkered down and inhaled the lot. The lot being the “karisik kepab” platter, aka the meat mountain. This consisted of the cop sis (lamb chunks), pirzola (lamb chops), kofte, pilic sis (chicken breast chunks), tavuk kana (marinated chicken wings) and lokma kebap (lamb medallions). The juices flowed into the rice beneath, galvanising it with flavour.

Me being the greedy git and in the spirit of maintaining my sizeable arse, I ordered the “bildircin” £11.45 – the marinated quail. After seeing them on the ocakbaksi, I could hardly resist. The flavour was distinctly gamey, multi layered from the spices and intensified from the coals. Quail in my experience has always been delicate and doen’t stand a chance against the armed assault of the grill, but it’s not an unwelcome addition.

We surrendered with the lamb kidneys £9.45 “bobrek”. Despite their pronounced funk of animal organ, the caramelised edges from their interaction with the grill and soft centres made them easy to eat. You either go big or go home when venturing into new neighbourhoods I’d say.

The engines were turned off when the Turkish delight and baklava arrived, they were wasted on us.

I was so enamoured the first time around, I came back on my own steam a year later. Ok I did some exploring in between.

This time it’s in a shade of teal.

On the house, they brought over a chopped tomato salad with pungent yet sweet red onions and parsley.

The bread seemed a tad stale and tepid. It deserved more heat to make it as good as before.

The patlican tava £5 was 45p cheaper this time around, but it was also twice the size. Not only was the portion bigger, there was sense that it was fussed over a bit more too with its extra vegetable accessories.

The falafel £9 were centimetre thick coins of fried cardboard. Well at least that’s what it tasted of anyway as they were as dry as a bone. No amount of cacik or humus could revive it, only less time in the frier.

The lamacun is that large, it can be a meal itself at £3.75, but it tasted like it got out the wrong side of bed this time around. It just seemed dank, cold and actively offensive. I left it after a couple of bites, I was too polite to send it back. The best thing was the fresh salad it came with.

The cigar sis £10, a name which sounds like a STD were the lamb livers, on flat bread and caramelised on the ocakbasi to a dark purple splendour, they looked really appetising. But what we got was something that had the texture of a flip-flop. As I chewed down on the first bite, I was wondering why the chef would do such a thing to a harmless animal that once ate the grass from the land. I’d dodge this one and wouldn’t eat it again, even with gritted teeth.

The best thing the flip-flops came with was the steaming tomato and white rice. it was so fluffy and genuinely gorgeous.

Turkish delights are always wasted on me, I just find them too sweet.

When did I go? July 2017 and July 2018
The damage: Expect to pay £20/35 per head sans drinks
The good: Eating at Mangal 2 was like a game of two halves. The first half is a corker, your favourite team is on song and look practically invincible, everything is hitting the back of your opponents net. The players are playing like the best versions of themselves. Then, after half time the players down tools, become complacent and concede 5 goals. The manager is kicking and screaming, but it’s too late the game is lost. Alas, I really wished that Mangal 2 played the second half like the first which would have won the game. Having said that “The Man Of The Match” for first half at least was the “karisik kepab” platter.
The bad: Many things sucked – looked like we had a different chef second time around. The worst was the cardboard falafel and flip-flop kidneys, they could easily be administered as corporal punishment. Don’t get me started on the soggy lamacun. How on earth did it lose it’s sparkle? Who knows, but the chef during my dinner visit out-gunned the chef on the lunch shift that’s for sure.
Rating: 3/5
Would I go again? Still deciding…
Address: 4 Stoke Newington Rd, Hackney Downs, London N16 8BH
Web: https://www.mangal2.com