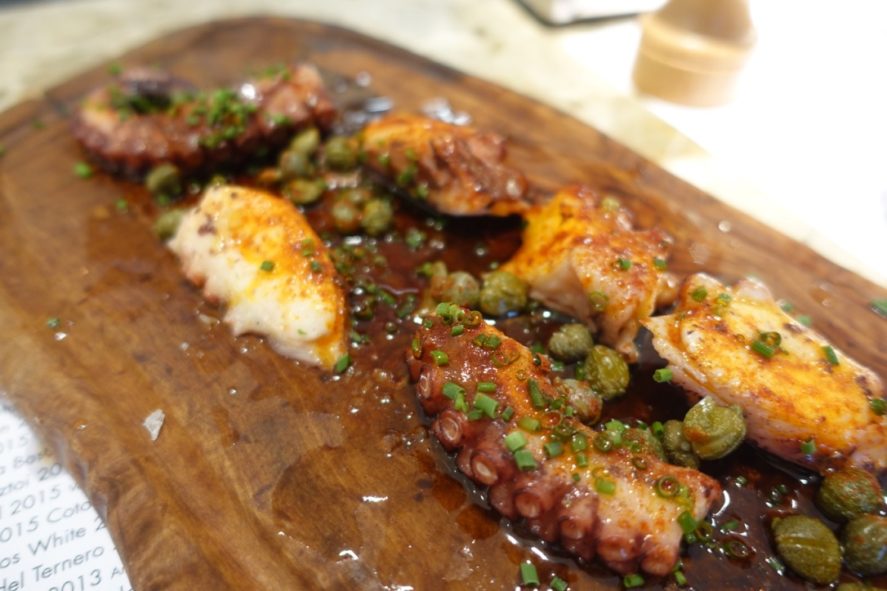 Barrafina Frith St, is the original Barrafina. They have moved to a new, bigger premises in Soho, right by its sibling Quo Vadis (which I love too), on Dean Street. Before moving to Dean St in 2016, Barrafina of Frith St opened in January 2007. It’s the brainchild of brothers Sam & Eddie Hart, they took inspiration from the exceptional Cal Pep in Barcelona. I’ve been there too and everything I ate was lick the plate good. The same can be said for Barrafina, it does its thing with gusto and I’ve been coming for years. The restaurant earned a well-deserved Michelin star under executive head chef Nieves Barragán Mohacho in 2014 and have kept it ever since.

The specials always come on the blackboard.

Pan con tomate £3.80 is refreshing, comes with a crunch of salt and is sweet at the same time. It’s also a staunch mainstay that has never left the menu. If you leave it for a few minutes, the juice of the tomatoes seeps into the the garlic smeared sour dough it comes with, giving a pleasing tomato squelch. Yet the edges of of the bread retain their crispness. I like it this way.

Of course you have to get the pimientos de padrón £5.75. The plump little peppers are shallow fried in olive oil and whilst piping hot, they get a good bit of Salt Bae elbow action. These are greens worth having. I get them every time.

I first had the beetroot salad £8 at Drury Lane. It had the profound sweetest white peach, which I feel this version misses. Having said that, the sweetness of the beets and earthy character of them still chimes. Its served in a puddle of olive oil, vinegar and a side act of sour cream that should have stayed in the props box, it’s just not my thing.

Tortilla with jamón and spinach £9 is a class act and another stalwart thing to eat here, and quite rightly as they’re flipping delicious. The specially machined pans they use to cook them, create a browned marbling on the otherwise custard yellow omelette with hints of greenery coming through. Then when you cut into it, there’s a viscous ooze of runny egg and salty swine that once only ate acorns for breakfast, lunch and dinner. My it is good swine. They ALWAYS slide down nicely. Come here for these.

Mid-way through the meal, we order Txakoli, a type of young white wine full of mineral and fruity notes. I talked about it before during my San Sebastian trip, which is when I first became friends with the stuff. They always pour from a height to aerate the juice. It’s refreshing and after a couple of glasses it can get you lively.

What comes next is octopus with capers £12.50. If you order it, you’ll be the beneficiary of low and slow cookery of the compact muscle from our eight-legged friend, until it becomes buttery soft and yielding. All it needs is chives, olive oil and paprika to complete the party in your mouth.

The duff note comes in the form and pigs trotters, chorizo and chick peas £12.50, slow-stewed until everything becomes a heart-warming thing to sooth away a frigid winters night. That’s what I thought anyway before I tried it, instead we got something that lacked seasoning, body and accomplishment.

Morchilla ibérica £9.50 is blood sausage made from the same swine that only eats acorns, I fell in love with it as soon as we met all those years ago on Frith street. The dark rich salty flavours are sultry, that makes great sense when eaten with the fried quail eggs and the sweet stew of peppers. There’s also paper thin crostini made for nibbling too.

When did I go? July 2017
The damage: Expect to pay £50/65 per head with booze
The good: Barrafina puts its best foot forward by bringing extremely pleasurable Spanish cooking to our shores, cooked in a very slick open kitchen that runs like clockwork. They have so many dishes that have been loitering on their menu for years, for a reason – they are exceptional. Specials are rotated weekly too, to keep things interesting. I’ve had many moments at the Frith St restaurant that formed into memories. Sadly, I’ve only been to Dean Street once, as poignantly I preferred the older site for its characterful snugness and Nieves Barragán’s midas touch. She was there every time I went and now owns Sabor which is genius.
The bad: I hope they adjust the pigs trotters to make it a proper dish if it features again. During peak hrs, expect to queue for an hour++.
Rating: 4/5
Would I go again? Yes
Address: 26-27 Dean St, Soho, London W1D 3LL
Web: https://www.barrafina.co.uk