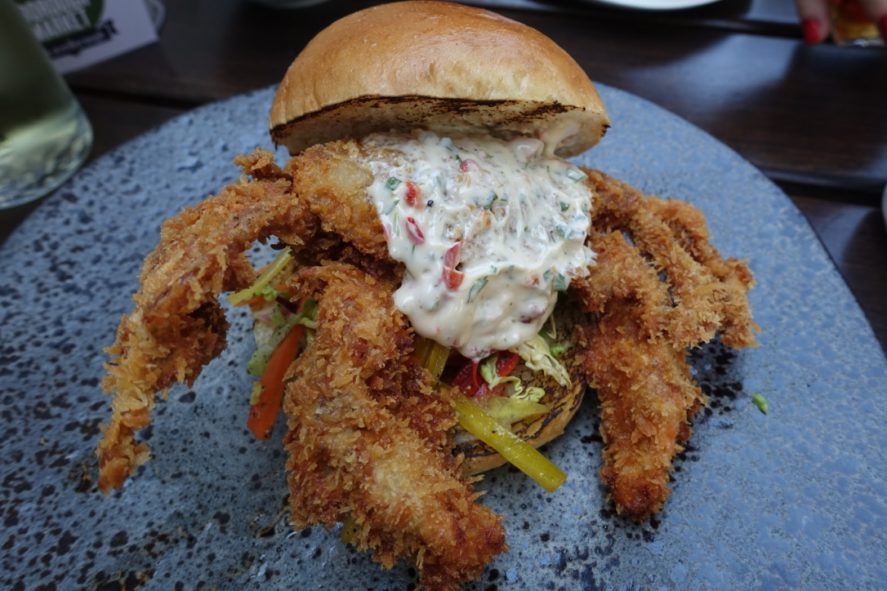 I’m no stranger to Borough Market, but what seems like a Mecca for so many good things to eat, has become a place so hit and miss. To really find a good spot involves a lot of devotion and wasted calories, in my personal experience. You may find it a fun ride navigating through thick waves of hungry and curious patrons – I do to. But when I can’t be arsed, I head to Fish. It’s been a reliable source of things fried or grilled which once swam the sea; fins, tentacles and shells is what they specialise in since 1999. They say they get most their Fish from the market or delivered daily from their fish mongers in Kingston, which get their stuff straight from the boat. I’ve shopped there too and it’s bang-on but bloody expensive.

I always go for the soft shell crab bun £15.95. It’s a serious size, legs and claws hang ridiculously over all sides of the lightly toasted brioche bun it comes with. The crisp batter holds the delicious crab juices within. There’s a sort of tartare sauce with diced peppers and herbs, along with a lightly dressed slaw of carrots and more peppers. It demands to be inhaled. We washed it down with a carafe of minerally loup y es-tu wine £22.50. It’s a good time to be alive if you love soft-shell crab.

During another visit with an old work mate, much to my chagrin, they didn’t have any soft-shell crab buns and our waiter was clueless as to why not! Instead of lamenting, we ordered a few other bits.

First up we got the large white bait to share £12.95, fishy little things that could be consumed whole. Who said you can’t do nose to tail eating with things from the sea hey? They were pleasing enough, but they aren’t soft-shell crab.

One of their other signatures is the squid with chorizo on sour dough £19.95, a banal combination, but works time and time again. The problem here though, is that the sauce it came with, as luscious as it looked was a bit one noted. The tomato was so prevalent that everything else tasted intensely of it – now that’s not necessary a bad thing if you like them, but I would have preferred the sauce to be lighter so all the other ingredients aren’t drowned out. And it’s not a soft-shell crab bun.

The chips £3.95, had a nice rustle and were a half way house between chip shop chips and those chunky triple fried ones you get at Berners Tavern, but less compelling.

A token mixed salad turned up, the kind that you can easily make at home.

When did I go? June 2017 + Aug 2018
The damage: Expect to pay £25/60 per head with a drink
The good: After coming here four times now, did I say that the soft-shell crab bun was to die for and the thing to order? I won’t play that game anymore. (Sorry-not-sorry). From what I tried everything wasn’t actively offensive, but they didn’t create any moments. I know where I’d like to chuck my money at and it’s got eight legs.
The bad: You won’t expect culinary cartwheels here, but they do have some joy-making things to eat like the soft-shell crab.
Rating: 3/5
Would I go again? Yes
Address: Borough Market Cathedral Street, London, SE1 9AL
Web: https://www.fishboroughmarket.com