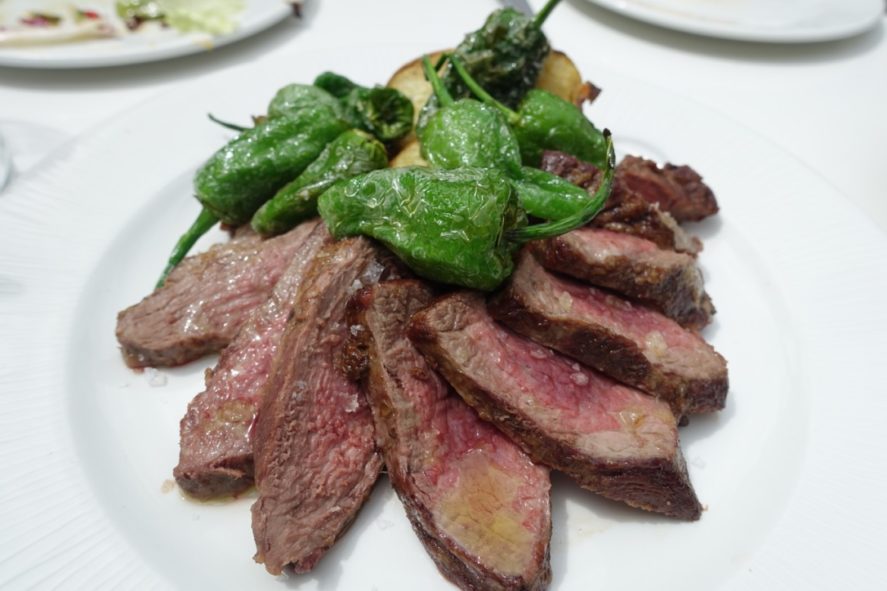 José Pizarro is originally from Cáceres, a city in western Spain’s Extremadura region. He came to in London in 2000, cooked in the likes of the now defunct Eyre Brothers, Brindisa and Gaudi. Apparently, he ditched the dentist forceps in favour of the kitchen knife as his love of food prevailed over dentistry, his other passion – I thank the heavens for that. I know what I’d rather be known for. Before launching his Broadgate restaurant in may 2015, he opened his first venture José Tapas Bar on Bermondsey Street during 2011. He’s now added two more to the collection: Pizarro, just a few yards from José Tapas, and finally José Pizarro in the Swan in Esher. Expect a “contemporary” take on Spanish tapas, whatever that means. I came to the Broadgate restaurant for a bit of a business lunch, fully expensed of course. They also do brekkie and brunch here just in case if you need it.

The “contemporary” theme continues inside with padded leather topped stools, shiny granite tops to perch on and blackboards explaining the day’s agenda. Of course there are hanging legs of jámon.

Mojama £7.50 is what came first from our order, it’s a Spanish delicacy consisting of filleted salt-cured tuna, typically from Huelva and Cádiz in Spain according to Wikipedia. I call it the jamon of the sea, which is more relatable to my palate, combine each bite with those Spanish almonds for extra mouth pleasure.

Of course we had to get padron peppers £6 – no tapas meal would be complete without them.

Calamares £10 were sweet baby squid, tentacles and all, seared a la plancha with sweet chillis, rustically cut garlic and parsley olive oil. What I love about Spanish seafood is the freshness and simplicity – this was a fine example of that, but you’ll be paying a tenner for two of them.

The tortilla £4.50 was also a success, perhaps not as unctuous and gooey as the ones from Barrafina, but it was pleasing nonetheless.

Presa Iberica £50.75 (3.5 grams @ £14.50 per gram) is the top of the pork loin, attached to the shoulder of the animal which once roamed freely, only eating acorns throughout its grazing life. In my eyes, it’s the Rolls Royce of the pork world – a proper bit of divine swine that I would have over steak hands down.

When did I go? June 2017
The damage: Expect to pay £50/60 per head with a drink
The good: If tapas is your thing as it is mine then you’ll revel here, there wasn’t a dud in sight. Broadgate Circle isn’t that bad either if you can put up with the suits. The presa Iberia is a must if you wallet can take it.
The bad: The price might make you flinch.
Rating: 4/5
Would I go again? Yes
Address: 36 Broadgate Cir, London EC2M 1QS
Web: https://josepizarro.com/jose-pizarro-broadgate/