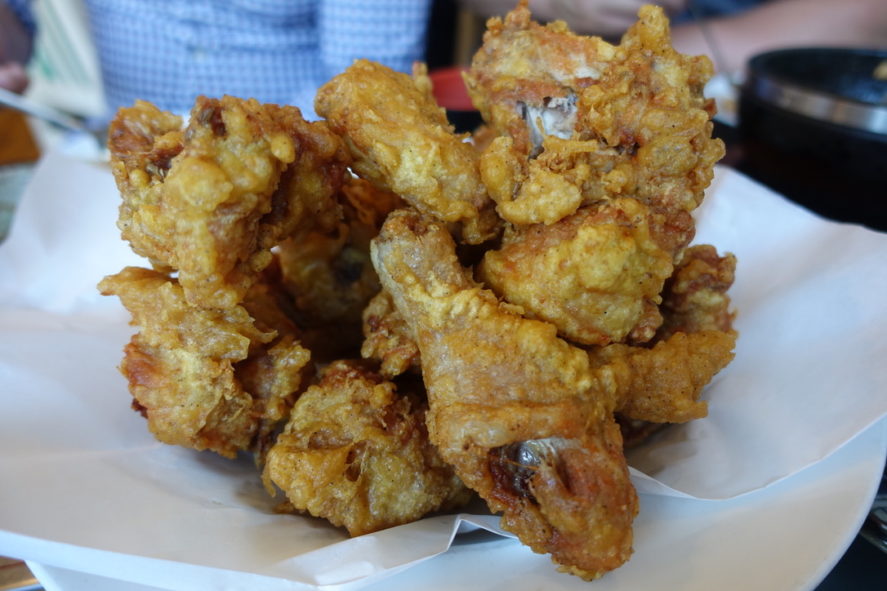 Kang Nam is one of the latest additions to the already strong fleet of Korean restaurants in New Malden. It used to be a former chippy called “Rock N Roe”, but now it serves up the customary stablemates such as Korean BBQ, bibimbap, homemade mandhu dumplings, bulgogi and tteokbokki – those chewy, gummy rice cylinders stewed with gochujang for extra clout. But what they do differently is introduce their version of “KFC“, that would be “Korean Fried Chicken“, which is a prolific thing in the foodie circles at the moment and their spicy squid is quite special.

Banchan is by tradition a pre-starter. Their kimchi is on point. You might sneer at the iceberg, but it has a fruity coating, it tastes like apple and is quite refreshing.

Gun-mandu £7.50 are their pot sticker dumplings filled with pork, beef and japchae noodles. They’re good, but I’ve had better minutes away at the Palace.

The same goes for their haemul pajeon £8.90, the fried pancake stuffed with squid and spring onions. It was perfectly edible but it missed the crisp and crunch which is synonymous for a good one.

Ojingeo-bokkeum £8.90 is the spicy squid I mentioned earlier, the tender squid which is sodden in sticky gochujang is a wake-up call for the tongue, it’s one of the compelling reasons to come here.

Syerranjjim £6 was a steamed, fluffy, eggy mess in a Korean stone bowl. It was both comforting and the definition of a simple food can be great.

Kimchi fried rice seemed like it was invented at 3am courtesy of a stoner, but it fires up as a luscious, greasy promise that had me going back for more. The egg, sunny side up is undercooked by default, its whites still jiggly and made for mixing into the rice for moisture. The patina of filth is still in my mind.

Miso soup is the accompaniment.

The saewoo-gui £10.50 are butterfly prawns, pert as they should be, stir-fried until they brown and their sugars caramelise. Stick some sliced onions in there too and you’ll get a dish sodden with natural sweetness.

The fried chicken £18 is the whole bird dismantled and coated in seasoned flour, then it’s fried till the exterior becomes craggy, crispy – it offers a whole load of excitement in the suburbs. Sauces of sweet soy and a smooth fermented chilli dip brings lubrication, the steaming chicken demands to be slathered in the stuff. There are cubes of pickled daikon for a palate cleansing crunch.

The japchae £8.50, a bowl of slithery, chewy mung bean noodles with beef and softened onions does its thing with gusto.

The Ojingeo-bokkeum £9.90 – the squid that’s unmissable.

The saewoo-gui £10.50, confectionary from the sea.

The bibimbap £8.90 was a decent thing

The fried chicken £18 – a whole pile of crispy goodness.

We have kimchi, aubergine and mash potato banchan

Tteokbokki £8.50, the famously squidgy rice cakes in a thick reduction of sticky gochujang, slithers of fish cake, onions and cabbage. It’s a dish that hits all the food groups and leaves my belly immensely satisfied.

What they also nail here are one bowl meals. Here is their mackerel teriyaki with some steamed riced and a token salad. It tastes great and you could easily pop in for lunch or dinner on the move wit this dish. I can think of far worse ways to spend £8.50!

What Korean food is really good at is warming up the cockles on a cold January afternoon, Kang Nam hits those notes. Don’t just take my word for it, get yourself some tteokbokki!

The kimchijeon or kimchi pancake £6.50 was hot and crispy, full of those funky sour notes too. But I find the pancakes here a bit hit and miss, this one is no exception, it was just too greasy.

The squid is always bang on though.

Onto the kimchi-mandu jeongol £27.90. The first assemblage of the dish is the table gas cooker, like the ones you take camping with you. A cauldron is placed on top, full of kimchi, mandu dumplings and other trinkets such as enoki mushrooms feature too. Then the cooker is fired up. It’s a bubbling orange stew, it’s colour taken on from the kimchi. But it’s more than that, it’s cold weather therapy that I can see why the Korean’s eat it during sharper climates in their home country. I get it, if the sour funk of fermented cabbage makes your pulse race then you’ll revel eating it. I just find it all a bit one noted. Oh, and it can also feed three.

When did I go? Nov 2017.
The damage: Expect to pay £20/25 per head just for food
The good: Highlights include the saewoo-gui prawns, the tteokbokki, the fried chicken obviously. Did I mention the spicy squid? You can get all of that for a wallet caressing price with snappy service a stone throw away from New Malden train station.
The bad: I’d dodge the cold, sometimes insipid, greasy pancakes.
Rating: 4/5
Would I go again? Yes
Address: 19A High St, New Malden KT3 4BY
Web: https://sixportlandroad.com