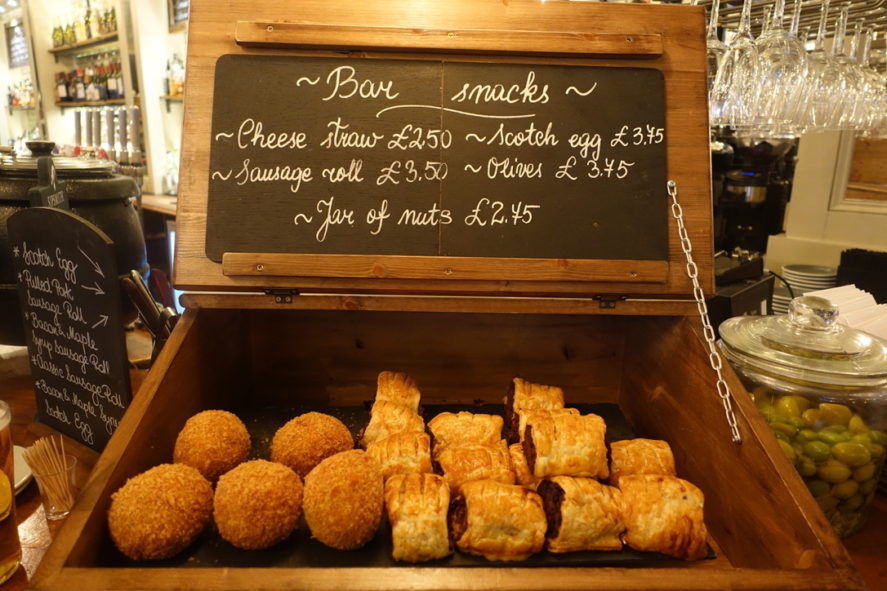 The White Horse is a stalwart City boozer with enough rustic charm to belong in the Surrey Hills – just. It has a heated terrace that over looks Exchange Square, a concrete court yard ripe for City boys and girls who like to linger in the sun when its out. It’s a nod to boozy lunches and mischief when the gaffer turns his back. They have an un-shabby list of craft booze on tap be it ale or IPA, anything to dodge the “wife-beater”. Their whisky selection isn’t bad either if you fancy a dram of Talisker 10, Oban 14, Balvenie 12 or even Hibiki Harmony. The food though, speaks loudly of comfort, belly rubbing, thigh enhancing comfort.

The sausage rolls £3.50 come with a fresh melting pastry, egg washed for maximum effect and wraps itself around coarse, herby sausage meat. It comes with the right level of seasoning and are royally good.

Even more lovable are their scotch eggs £3.75. They’re crisp-crumbed with sausage meat that isn’t bland but tasty and joyous, that’s before you get to the indulgent runny yolk that doubles up as sauce. They that we good we ordered another one – each.

But things get shaky with their “offally good pie”, the innards are parched – the steak is unyielding with the oxtail and kidney in the same vein. The suet pastry had seen too much of the oven drying it out and there’s a back hit of bitterness. It cried out for the gravy for help, but despite it’s glossy appearance, it lacked body and depth. The braised red cabbage tasted dank and too much like school dinners. Oh I’m such a whinger. The mash was dreamy though and a consolation that deserved to be on the plate.

My fellow diner went the brioche bun’d buttermilk fried chicken £7.75, he said it was good, we’re going to have to take it word for it.

When did I go? Nov 2017
The damage: Expect to pay £25/30 per head with drinks
The good: The food here has promise, it delivers with their sublime sausage rolls and even better scotch eggs, I would have been a happy punter if that was all I was given.
The bad: Their misjudged pie just needs less cooking to make it a good one, I sense that it wasn’t intentional and it’s a crime that only deserves a caution than culinary imprisonment.
Rating: 3/5
Would I go again? You don’t need to ask me twice!
Address: 2 Exchange Square, Appold Street, EC2M 2QA
Web: https://www.thewhitehorseec2m.co.uk