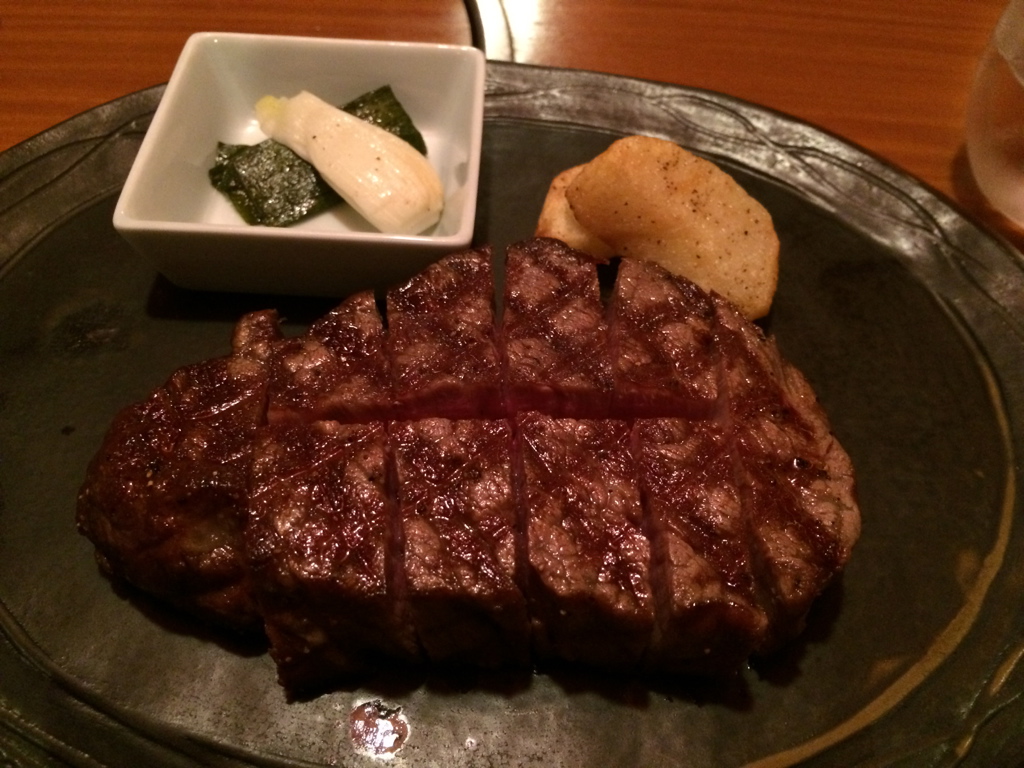 I figured it to be worthwhile to write some words about what I’ve learnt and what my experiences are of ‘authentic’ Kobe beef before reviewing Seryna, as I have been guilty of enjoying the knock-off Kobe (wagyu) that featured in many a restaurant I’ve dined in. I hear though, that the ‘wagyu’ I’ve been eating is the spawn of the Black Angus & Kuroge Washu cows, which are bred in Australia or the US. Purists would argue that the rigmarole descriptions we see on Western menus are nothing more than fairy-tails – yes those unicorn cows you hear of being massaged, drink nothing but Sapporo beer and are played mellifluous music. Alas, it’s nothing but a spoof as in reality they aren’t fed beer but are groomed to set their fur (not massaged), are fed high quality grains and raised on micro farms, where there are only a handful per farmer. And from all of the 47 prefectures, (states), only the Hyogo prefecture produces Kobe, according to rules as set out by the Kobe Beef Marketing and Distribution Promotion Association. Hyogo is most sought after wagyu on a global level, however, Miyazaki is hot on its hoofs after winning recent competitions. So there is a difference in Kobe and wagyu kids!

So onto Seryna, a registered restaurant of the Kobe Beef Marketing and Distribution Promotion Association (deep breath) has been peddling finest cuts of Kobe since 1961 and my god is it good. The Japanese grading system has a five-point scale from A1-A5, A5 being the holy grail of Kobe. The grading criteria is led by the intramuscular fat content, fat colour, meat colour, oxidation levels and firmness. The chateaubriand is what we go for and pre-cooking theatrics is rudimental – why wouldn’t you want to see it in all its glory before it’s served to you? The marbling is like none other I’ve seen before. Insane! The dimly-lit interior comes with lashings of dark wood panelling, matching tables and carpets. I can only describe it as ‘old-school’ and seems to have been time warped from a bygone era. Especially with those bib wearing salarymen. The ‘crab steak” ¥3600 (£23 in today’s money) comes as 2 legs and a sorry piece of broccoli. Speaking openly I was uninspired by them as the flavour of the crab wasn’t as sweet as I expected it to be and they tasted like that were confit’d in butter. Not necessarily a bad thing but the inherent flavour of the crab seemed masked by it, not even the lemon could brighten them up. Now onto that Kobe tenderloin ¥9000 (£60 in todays money) which I can truly say was magnificent. It was back in April 2014 when I dined here and since then I have not had beef this juicy nor as melt-in-your-mouth-buttery. The mouth-feel is unique and the flavours burst onto your tongue like no other – it really was was of those ‘close your eyes’ and savour the moment experiences. A side of wasabi dipping soy and sesame oil was available to season those heavenly cubes of Kobe should you wish. In my opinion it didn’t need it. Kuzukiri which are chewy translucent noodles made out of arrowroot come chilled in viscous syrup – it does exactly what it says on the tin and I reckon it’s a type of desert which you’d only love if you grew up eating it. We finished off upstairs where the surroundings were impressive to say the least – well it felt opulent anyway when the geisha served us our whisky!