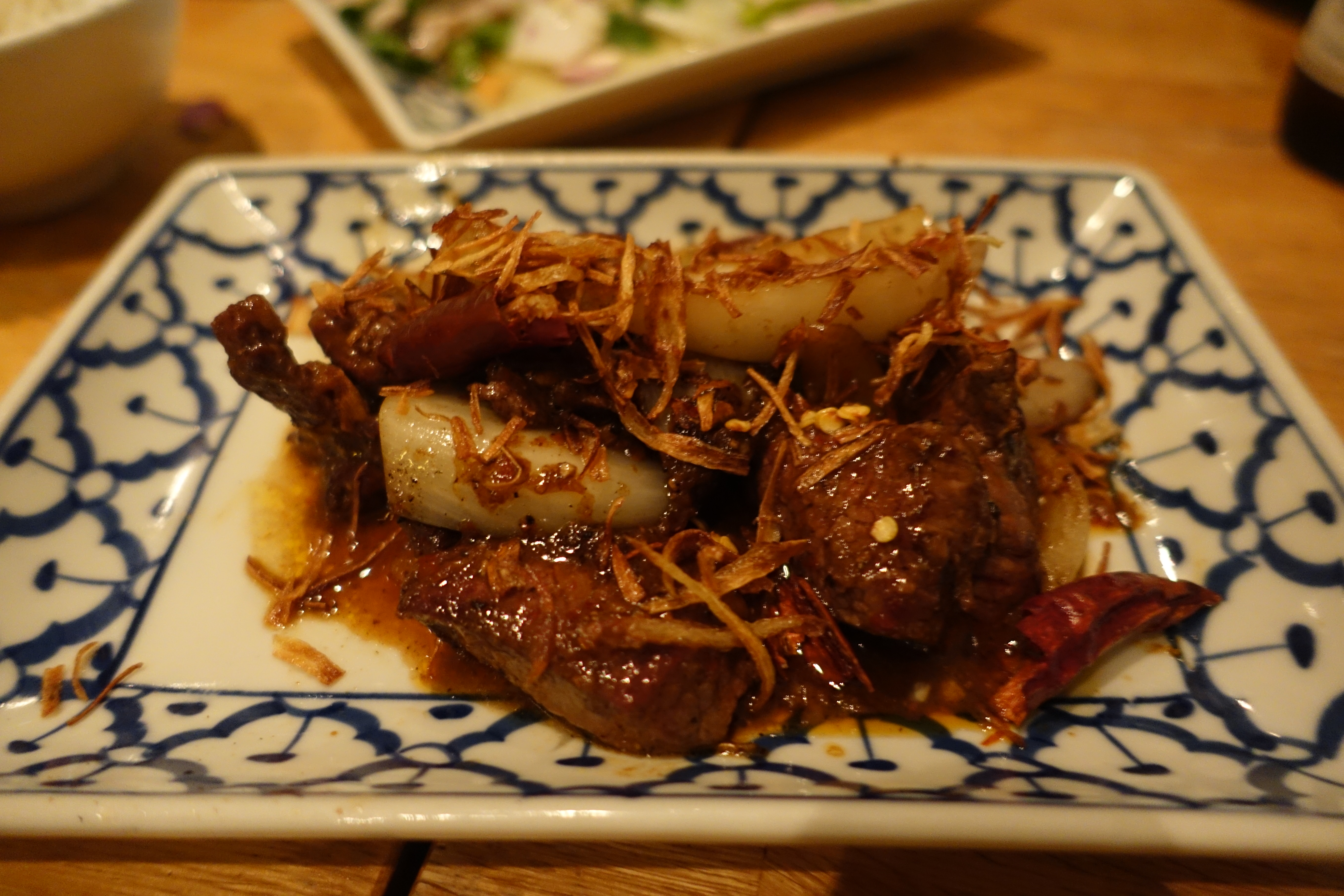 I’ve become a Thai food seeking missile after eating in the likes of Smoking Goat and Som Saa (a pop-up seeking a new residency). I hold Seb Holmes responsible, a former sous chef at The Begging Bowl, head chef at the Smoking Goat and of course he cooked alongside Andy Oliver at Som Saa. Putting two-plus-two together, common sense would say that The Begging Bowl had to be worth checking out. Owner/Head Chef Jane Alty who has been a Londoner for over 10 years, boasts cooking credentials gained at the likes of Bibendum, Galvin at the Windows, the now defunct Racine and of course Michelin starred Nahm of Bangkok. She opened Thai street food influenced ‘The Begging Bowl’ in August 2012 and is positively inspired by her travels to Thailand, spending time with relatives who are based there. It’s so good to see chefs bringing back some exciting flavours from Thailand and The Begging Bowl is a fine example of that.

Being from a different part of town, my perception of Peckham evoked thoughts of doubt after walking all the way from the Hoppers in Soho via the ghetto of Old Kent Road – could a Thai oasis really exist? Thankfully the rough entered into the smooth and the neighbourhood wasn’t too shabby at all in this part of Peckham. The menu format is keyed with circular symbols in different colours corresponding to portion size and price – the dishes and their descriptions are then correlated to their respective colours. An interesting way to match price vs size, head scratching nonetheless, I didn’t care nor should you. The drinks menu is less nebulous. Unlimited Jasmine or sticky rice was available at £2 per head – a rarity in London, albeit you should eat less to save room for everything else! Salad of baby squid, star fruit, ginger, coriander, mint, deep fried garlic, chilli & lime dressing (£6.25). The squid just catches the heat so it shouldn’t have the texture of flip flops. Weirdly though this one needed canine strength jaw-grinding to break it down. Stir-fried venison haunch with chilli paste, onions and spices (£8.25). Much more soft-yielding were succulent pieces of venison glazed with aromatic spices enhanced by the scorching wok, I only stopped when there was no more. Salted free-range pork cheeks with coconut cream and aromatics (£6.25). It’s great to see a lesser cut of the animal make the table and here they do it justice. A good time is lavished tenderise the the working muscle of the beast so we don’t need to use ours to enjoy it. Fillets of Gurnard charcoal grilled on banana leaf covered Gola coconut red curry (£10.50). Here we got deep carbonic umami palate coating spices, yet the integrity of the fish was prevalent. Stir-fry of morning glory, with crispy garlic, soy & white pepper (£8.50). A staple for me when it comes to Thai food and it’s done really well here. A testament of the chef using the ripping heat from the wok to get the best out of the vegetable. Fillet of stone bass & clams in coconut & turmeric boiled curry (£12). What I liked about this dish is that the inherent flavour of the fish stayed intact within all the creamy aromatics. The little clams were sweet little jewels from the sea. Suffolk chicken leg massaman curry with peanuts, Thai shallots & roasted quince (£12). You can really taste the robust roasted spice flavour in this bowl of goodness, it’s much less sweeter and milder than some of the massaman curry’s I have had and that chicken flesh slid off the bone effortlessly. Fermented free-range pork belly wrapped in caul, charcoal grilled and served with cabbage, peanuts, ginger & birds eye chilli. Don’t deliberate on what “caul” is, trust me a enjoy the dish. You could taste a funk (in a good way) in the little sausages which were intensely rich a savoury. I can just imagine chowing down on these in a Thai shack by the roadside surrounded by them hanging up dry fermenting. Fish cakes with sweet chilli sauce (£6.25). Greaseless, less spongy and more coarse than I’ve had before but were packed full of flavour – the sweet chilli wasn’t too sweet and had a good bite to it. Not as memorable as the other dishes but good to have nonetheless. The damage: Expect to pay £30-£35 per head for a lot of food!
The good: After dining here I’m convinced that there is a world of Thai food I’d really enjoy outside the ubiquitous high st fare which generally tasted like Thai food made by Thai folk coming to the UK cooking for Westerners. On the contrary, I’ve not been to Thailand yet (“yet” being the operative word) but I can be convinced that the dishes served at The Begging Bowl is something that is a real taste of Thailand. The gurnard and venison are an absolute MUST.
The bad: You can only book for 8-10 people only.
Rating: 4/5
www.thebeggingbowl.co.uk
168 Bellenden Road
Peckham SE15 4BW
eat@thebeggingbowl.co.uk
020 7635 2627