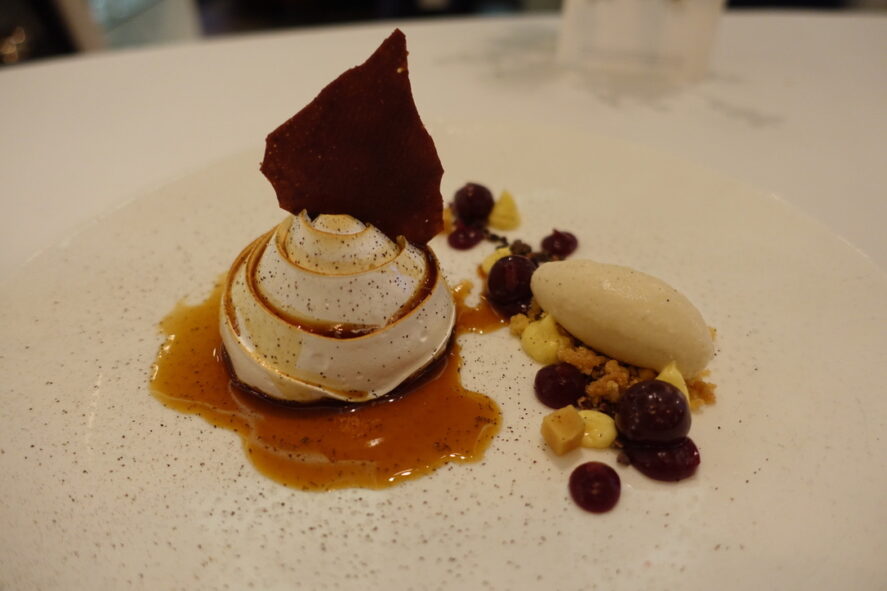 Marcus Wareing got his feet wet at the tender age of 11 packing potatoes and riding shot-gun with his father on food deliveries. It was then that he was inspired by his father’s relentless work ethic. At 18 he bagged his first job as a commis chef under chef Anton Edelmann at the Savoy Hotel in 1988. Five years later he joined the double Michelin starred Le Gavroche where he first met Gordon Ramsay. After some trivial stints in New York City, Amsterdam and at Gravetye Manor in Sussex, he teamed up with the angry Scot at Aubergine in 1993. Two years later, Wareing got the Young Chef of the Year gong awarded by the Restaurant Association. In the same year he buggers off to the states to join the venerable Daniel Boulud, and then to Guy Savoy in France. Upon his return to these shores he lands his first Head Chef role at L’Oranger, there he earns a Michelin star at a quarter of a century old, he gave Angela Hartnett her first job in this restaurant too. What a guy. In the meanwhile Ramsey was head chef at the double Michelin-starred L’Aubergine. Both Waring and Ramsey then got into the limelight for all the wrong reasons – they were being sued by A-Z Restaurants, the very group that owns L’Oranger and L’Aubergine for £30k’s with of sabotage where ovens were tampered with, fridges were turned off and reservations pages were torn. The pair paid an out of court settlement, if that’s not a guilty plea then I don’t know what is. Then in 1999 they started Petrus together – after 7 months of trading, the restaurant wins its first Michelin star with another in 2007 and 5 AA Rosettes to add to the trophy cabinet. In May 2008 he goes solo to launch his first restaurant at the Berkeley Hotel, taking the Pétrus lease with him from 19 September 2008. He publicly complained about Gordon Ramsey Holdings meddling in the kitchen and engineers a way to divorce them and leaves Ramsey’s shadow. He then told Waitrose Food Illustrated magazine that Ramsay left him bitter and conflicted; “half of me thinks he’s a sad bastard and the other half still adores him”. So that’s your brief history lesson before we chat about the food in Marcus, a restaurant with a world-pedigree.

Our meal began with cheese gougères which came as a six, huddled on a square plate with curled corners. What we got were oven-fresh, crisped-shelled, fluffy centred cheesy snacks that would have been impossible to stop eating if they were piled up high. Of course we, I asked for more.

We then dismantle sour dough with a crust that snaps with room temperature butter to spread liberally on the lacy folds within – good bread always makes me happy.

We awash our palates with the Château des Annereaux £55, in the end we drank a bottle each, if you’re going to come here then do it in style.

For the mains, I opted for the four course menu at £95, the first to arrive was the veal belly that came with neatly trimmed frogs legs, snails, a crumb of sorts and a vivid green puddle of wild garlic herb sauce poured at the table that some might call strident, I call it vampire slaying deliciousness. The dish was easily one of the most abiding memories of eating here.

One of dining company had the scallops with cauliflower and cucumber, he was endlessly pleased with himself as it was clearly dish fussed over in the kitchen before it came to us. There were delicately placed purple flowers and the other accessories to go with the caramelised scallops that sung of sweetness.

Then there was the sea bass with celery and a red wine bottarga jus that was inhaled by my dining buddy Biscuit.

For the mains, I was the beneficiary of the graft that was put into this hunk of Galloway beef with a rustic hunk of crisped potato that shattered on my teeth, marrow featured too as did a wedge of cabbage and short rib. (More on that in a sec). Everything was covered in the sheen of glossy jus that had palate coating depths that could be detected by sonar.

With that came slow cooked short rib with unctuous bone marrow served in a miniature pan that looked like it was nicked from the commis chef, inside there was a velvety topped spiced foam that spoke loudly of reduction and butter. Calling it rich was an understatement, I found myself scooping until it was over-spilling on my fork.

The others had suckling lamb with mint radish and crushed black olives. I was told it was superb but the food envy was real when they saw my piece of show-stealing meat. Easy tiger.

Fast forward six and a half years I’m back for another feed. Hello friend. This time it’s to celebrate 300 posts on here, an occasion that demands a sense of occasion. Marcus seemingly fits the bill.

Our front of house who was positively brilliant introduced us to the kitchen, probably not the best time as it was in full service, an orchestra in harmony, but it was good to hear and see the thrum of the action. The beady eyed brigade with notice Craig Johnston in the kitchen, the 2017 MasterChef champion.

Gosset Marcus Edition Brut is a brilliant pour, even at £28 a glass – I did say it was an occasion.

One of the positive perks of eating in a Michelin star restaurant are the amuse-bouche, single bites of wonderfulness and here we get thin slivers of salami ripe with cure and cheese tartlets hitting high notes of nutty cheese flavour.

My eyes were on stalks when the bread arrived at the table, if you’re going to bring pain d’epi, focaccia and brown sour dough this good then that’s fine by me. When it’s this compelling I can eat it until I combust, and yes I did asked for seconds.

For an £8 supplement you can have roast orkney scallops for starters in a dark shiny bisque that shimmers under the lights. On the same plate is a velvety dollop of silken taramasalata con-caved in the centre for a puddle jade green dill and tarragon oil, also a luscious beef and a bone marrow vinaigrette is also poured on at the table. What summed up this dish was the burnished scallops, the shooting star ingredient which had a deep sweetness as did the open ended crispy cannelloni filled with a good smack of white crab meat. It was a dish I woke up remembering.

Our pulses continue to rise with the other starter, a caramelised potato gnocchi with braised kale, chanterelles, sorrel beurre blanc and shaved Winchester cheese full of nutty funk. There was absolutely nothing I’d change about this dish, there was nothing missing.

First of the mains came the pan roasted Cornish cod, a lone octopus tentacle, lovage, preserved lemon, fennel and matelote sauce, a sauce poured with care at the table that brimmed full of roasted onion and fish notes. Thank-you Chef.

The other main, or the main main in my eyes was the breast of Goosnargh duck armed with the added novelty of crunchy sugar lacquered skin titivated with caraway and fennel seeds. I found myself admiring and loving the tension and the pleasing depth of flavour the quack brought to my greedy mouth.

From the sides we got the beef fat potatoes £8 with truffle sour cream, a bowl of rustically-hewn hunks of gnarly edged goodness. They came piping hot as they should but despite their appearance, they lacked the crunch and seasoning you’d expect at this level. You can’t have it all I guess.

This is cabbage £8 with and ranch dressing with Michelin levels of refinement.

For the cheese lovers look this way.. Did you know the cheese course always comes before dessert? We went straight for dessert as strong cheese is for character building – I wasn’t in the mood for it, this is a perennial thing. I’m sorry if I’m beyond your reach.

The dessert, an eminently edible creation made with coffee, mascarpone, bourbon just for mischief, lashings of coffee liquor for more mischief, marsala ice cream with soft folds of meringue, then a caress of pickled cherries that does wonders and a majestic cardamon fudge. We end things on a high.

When did I go? June 2014. Dec 2019
The damage: Expect to pay £120/175 per head with some ornate wine.
The good: Marcus is a type of place where you can enjoy every dish, revel in and savour many moments. The food is finely judged haute cuisine, a hat-tilt to technique with precision and brilliance. It’s a legitimate Michelin starred restaurant with a world-pedigree that didn’t deserve to lose its two-star status which it held since 2009 before losing one in 2019. But I will indeed point you here to enjoy their ridiculously comfy chairs and a feed that is very much an event.
The bad: It will cost you a sizeable wedge, when the bill comes your nose may bleed but it’s worth it.
Rating: 4.5/5
Would I go again? I won’t leave it six years next time.
Address: The Berkeley, Wilton Pl, Belgravia, London SW1X 7RL
Web: https://www.marcusrestaurant.com