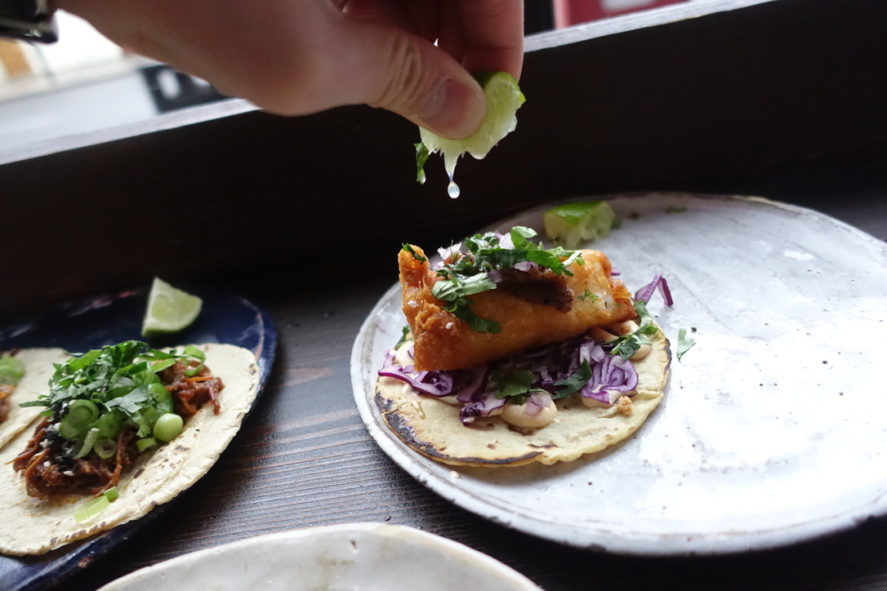 Breddos started life as a food pop-up run on a shoe string at East London’s Netil Market, I didn’t go, but now they have a permanent home in Clerkenwell that’s run by Nud Dudhia and Chris Whitney. Nud’s back-packing through Mexico inspired recipes that were sold at supper clubs, residencies and then a cook book was released in 2016. On a high, they opened in the same year and another shop in Soho a year later. I’ve been to the Soho branch and was left underwhelmed, it’s now permanently closed. The food I ate there had enough salt to humour the entire country’s cardiac surgeons. There is a hipster charm about this place with a designated vinyl corner with records displayed on the wall and a long bench dominates the centre of the restaurant with seats flanked on either side. I heard that they make all their tacos in-house – grinding corn, the main ingredient on a mill made from volcanic stone. Respect where respect is due.

We start with a bowl of guacamole £6 and salsa with huge discs of corn chips for scooping. It’s not the most creative of dishes, but they are a very good snack enjoyed at the front front bar where we sat with a pane of glass separating us from the thrum of traffic on the Gosewell Road.

Baja fish taco £6.75 is a thumb sized piece of battered fish with habanero mayonnaise, salsa molcajete and shredded red cabbage. It’s an accumulation of things that are a total treat to eat. We order one each and enjoy the virtuous interaction of crunch and steaming flakes of fish.

Quite tasty but less interesting in my eyes were the chicken masa tacos £6.50. They come with the same habanero mayonnaise, salsa molcajete and shredded red cabbage, needless to say nothing was wasted.

Beef brisket birria £6.50, is a fibrous, long-cooked stew of beef. It’s got nudges of freshness, aromatics and more salsa that huffs along.

For “pudding”, we got the a mission style burrito. I’m guessing it’s a burrito that’s been flattened on the plancha until the edges become blackened and smoky. Too much for my liking though as the acrid after taste was with me for hours after. On the plus side, our one was stuffed with more of that melting brisket birria.

When did I go? Feb 2018
The damage: Expect to pay £35 per head without drinks.
The good: Come here for the Baja fish and brisket birria, it’s worth investing your dime and time on those, they are a definite nod to how tacos should be done.
The bad: I’d avoid the mission style burrito, or at least ask them not to char it that much otherwise you’ll get a mouthful of carbonic fart that you’d want to avoid.
Rating: 3.5/5
Would I go again? We can never say never.
Address: 82 Goswell Rd, London EC1V 7DB
Web: https://breddostacos.com