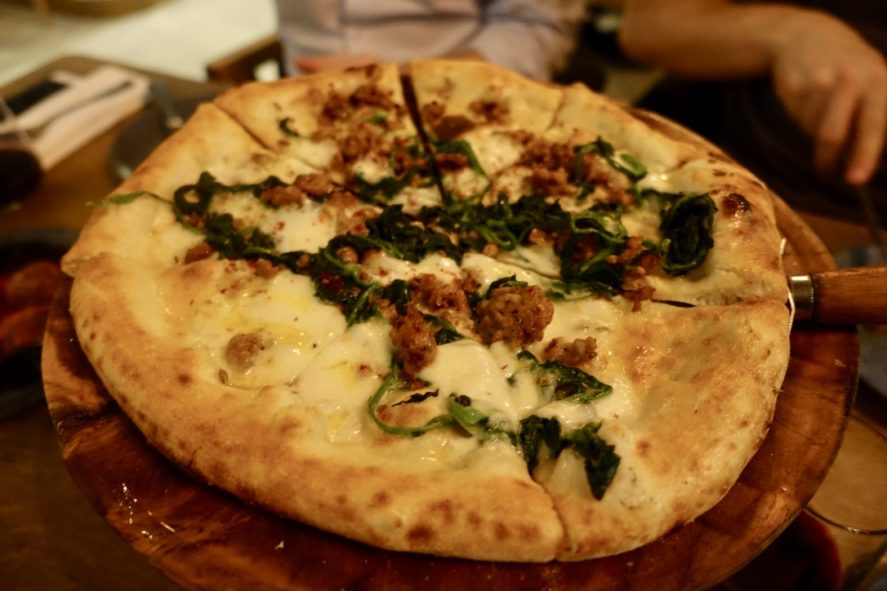 Passo is brought to us in October 2017 to the manor they call Old St from the guys behind the fabulous Foleys, a place definitely worth a visit if you want my tuppence, but that’s another review. After a bit of nosing around, I pinched this from their site: “Our dining room reflects our Italian-Californian spirit”, but what the heck does it mean? No idea. But what I see is a warmly lit room, a roomy 140 seat one at that, full of soft stone tones, browns and basket lampshades. You’re definitely not sitting elbow to elbow here and you can flounce around like a spoilt child without anyone noticing. The Head chef is Massimo Laquinoto, he cooked Italian fare on the 6th floor restaurant of Shoreditch House previously and trained at two Michelin starred Locanda Don Serafino. You might see him cook if you perch yourself around the marble Barrafina style chef’s bar.

We swig, sniff and sample before settling on the Nero d’avolo £22.50. Just double for what you can get it for in the shops, but it’s inoffensive and very glugable.

We start with fried artichokes £6 that have pleasing crinkly browned nutty edges and a “green sauce” as advertised that resembled salsa verde.

Beef and mortadella meatballs £7 with parmigiano were a bit of a duff note, the sauce lacked character and was one noted with bugger all and it didn’t warrant the £7 price tag.

The biggest let down of the meal was the baked whole cauliflower £11, the arriving temperature was icy and the chilli alioli was alive with nothing. We had to send to back. Twice. The third one was marginally warmer which we settled for. The last time I had squishy cauliflower was at Gaucho Broadgate, that version was a crime against vegetables too, this one was no different.

Things got better with the velvety pappardelle £14 with long-cooked wild boar raguot, taleggio and port sauce. If I was being hyper critical, it missed some depth and deeper tones you get with this type of cookery but we slurped it all done nonetheless.

Orecchiette with octopus ragout £15 came with olives and lemon thyme. It was all there, but in a portion size too small to really enjoy. The worse thing of all was that it wasn’t orecchiette, a pasta celebrated for it’s shape that resembles a small ear. Instead we got paccheri tubes. WTF.

Tagliatelle £14 was a stonking £17 once added with truffle. That’s fine, but ease off on the portion control. Seemingly, the pasta was cooked by accountants with a recipe strangled by the balance sheet.

The finally came the spicy sausage pizza £12, the most satisfying dish of the evening, but I couldn’t or wouldn’t point you here for the pizza.

Fried ricotta ravioli £5.50 were crisp frilly shelled things, filled with cheese that didn’t belong with nutella. But somehow I found them strangely alluring.

Orange and polenta cake £6 with a spoon of vanilla mascapome was moist and the best of the deserts for me.

Tenerina chocolate cake £6 was a chocolate brownie with a fancy name. The cinnamon ice cream was called this as it had a dust of the spice on top.

When did I go? Feb 2018
The damage: Expect to pay £45/60 per head with drinks
The good: My experience of Passo wasn’t actively offensive, nor was it actively brilliant. What I tasted were dishes that needed more love to make them lovable. The best thing that happened was our suited waiter, he was a gent when he brought our cauliflower over 3 times.
The bad: The cauliflower was a disaster, much of the food didn’t have the depths that stops the clock either. There’s better pasta to be had in Bancone or the nearby Pasta Nostra. I’d head to Pizza Union for something cheaper yet better too.
Rating: 2.5/5
Would I go again? Not convinced
Address: 80 City Rd, London EC1Y 2AS
Web: https://passorestaurant.com