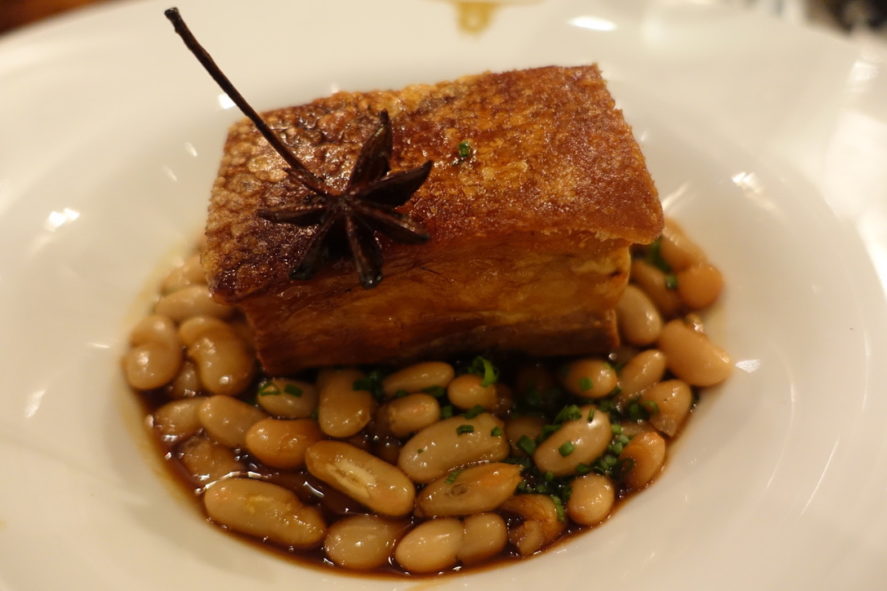 The London Steak House Company formed in 2008 and first opened in the City just off Bishopsgate – you’ve probably guessed that the schtick is the heart-thump appeal of steak. The folk behind it are the legendary Marco Pierre White, James Ogilvie Robertson and Rachael Ogilvie Robertson. One year later they opened their sister steakhouse in Chelsea – the Kings Road Steakhouse & Grill. I’ve been to both restaurants, the first being their City branch a few years back, a place where silly pin-stripe suits are rife and I thought the food limped out of the kitchen at best. The whole experience was lukewarm and I never returned. Fast forward a few years, I win a three-course meal through a charity raffle, it was a table for deus at the Kings Road Steakhouse & Grill. It was a free meal, I had nothing to lose. My stubbornness meant preconceptions, but once you’ve experienced a stinker it does encourage them.

My November 2012 visit at the City location

I opted for the potted duck with green peppercorns to start with. It was a herbaceous stewed down affair with booze, chilled and then served at room temperature with a layer of glistening fat. It was unapologetically rich with an instinct to clad your thighs and coat your tongue with viscous duck blubber. If you like healthy ingredients then look away.

I part of me wished that I ordered the dainty-looking gravadlax, a Scandinavian cure of salmon that asserts itself through citrus, dill and mustard sauce – in this case with a light pickle of celery.

The main event was the 8oz ribeye that came with a cross-hatch sear that only a scorching grill can be capable of. On the side were a predicable slice of grilled tomatoes, a solitary mushroom and custard yellow béarnaise flecked with tarragon.

The triple cooked chips £3.95 arrived stone cold and they would do some serious damage if thrown across the room – I could hear the jarring crunch in my jaws on every bite.

The in the same vein the onion rings came frosty, but in fairness crisp and much more appealing than the chips – the best out of a bad bunch I guess.

Some ordered the vanilla pannacotta with stewed down strawberries

Those with real greed like me ordered the robust sticky toffee pudding, it came as a fist sized block covered in with luscious toffee sauce and vanilla ice cream. It somewhat made up for the duff sides and small steak, but I get, there’s only so much you can have for £21.50.

Fast forward six years and I’m at the Chelsea location.

The venue here is less steak-housey and more about low-lighting, cream leather seating and white table clothes. I could smell the strong scent of opulent perfume from the ritzy lady sitting nearby – she probably arrived in a Rolls Royce, owned by her slipper wearing husband.

The bread came hot from the oven and brought joy, good bread is something I can’t get enough of.

First to arrive from the starters was the butternut squash soup with toasted seeds, it was a cold weather repellant in a bowl – it’s the sort of food that gets into your belly and rubs your soul.

Then came the beef short ribs – two slabs of melting, sticky pieces of flesh with a good coating of BBQ glaze. The slaw it came with was a mixture of purple cabbage, carrots with a good nudge of acidity to bring it all together. I must confess, it had me wanting for more – it’s this type of food that makes the winter a much better place.

For the mains braised beef bourguignon was all kinds of everything you could want from a stew of cow, so soft you could eat it all with a spoon and a deep brown sauce that’s a slow reduction of wine and stock. Only a sprinkle of chopped chives broke up the pile of brown made up of lardons, button mushrooms and pearl onions. The whole business soaks into the soft indulgence of creamy mash.

The pork belly is dubbed honey roasted “Marco Polo”, no idea? Me neither, but if you know enlighten me. What came was a hunk of swine that was roasted until the fats were rendered and surrendered, leaving just fork-tender flesh and a crackling that chimed against my knife. The honey must have made it’s way to the tender cannelloni beans which gave a hit of welcoming sweetness.

The onion rings £4.75 were definitely crispy as advertised, but they fell short of the mark. I found them overtly oily and the onion was lost in amongst the batter, it was basically all batter and no onion.

To the desserts: Chocolate and chestnut truffle cake wasn’t what I was expecting. It came as deeply indulgent delice with a bashful cranberry compote and a crisp tuile that sticks your teeth – a dusting of icing sugar made the whole thing look festive. These are all good things.

The boss got a sticky toffee pudding with vanilla ice cream. The quality was there, it’s a classic that can’t be beaten if you like you deserts to wrap around you love handles like a warm hug.

When did I go? Nov 2012, Jan 2018
The damage: Expect to pay £50/75 per head with drinks
The good: Let’s skip straight to my Chelsea meal and there wasn’t much t like about the City restaurant: Ironically, I didn’t have steak in a steak restaurant and was pleasantly surprised – let’s take the delectable beef bourguignon as a fine example. It was hardly the prettiest but it was one of the tastiest. And there’s that belly-rubbing pork belly worth pining for too.
The bad: I’ve since found out that the Chelsea restaurant is permanently closed, so you’ll need to eat at the City one!
Rating: 3.5/5
Would I go again? Well no has the good one is shut!
Address: 386 King’s Rd, Chelsea, London SW3 5UZ
Web: https://www.londonsteakhousecompany.com