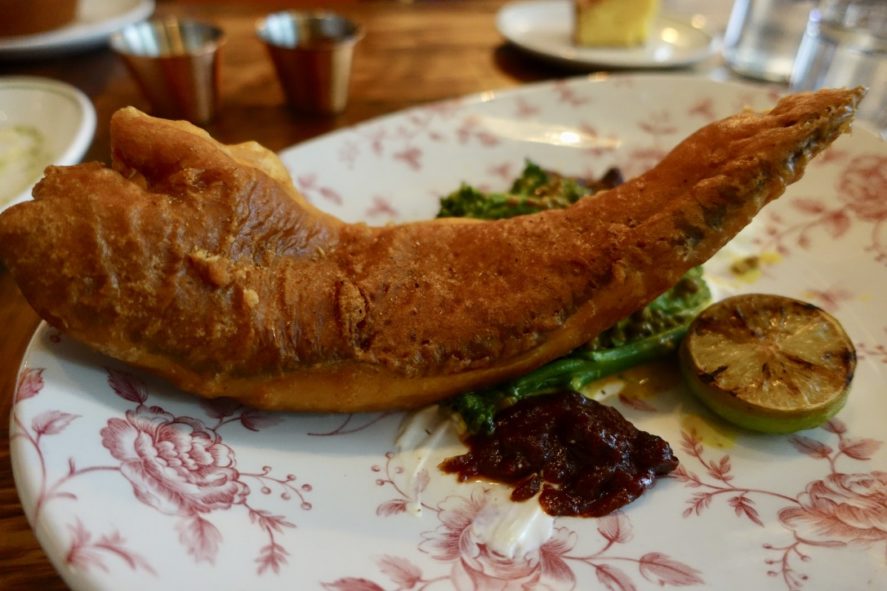 Behold Red Rooster and the man behind it – celebrity chef Marcus Samuelsson. He’s Ethiopian by descent, raised in Sweden and in the summer of 2017 he brings us the second instalment of Red Rooster to Shoreditch. He’s cooked for the likes of John Legend to Barrack Obama, thus the Obama short ribs on offer and at the tender age of 24 he became the youngest chef to win a 3-star review in the New York Times when cooking at Aquavit. Just like the original in Harlem NYC, it’s fluent in live music and “soul food” with a modicum of Ethiopian and Swedish influences no doubt fuelled by Samuelsson’s heritage. It’s a brassy kind of place that brings you shrimp ‘n’ grits with chicken and waffles with live bands at the helm – sounds like a good night out right? I came to find out.

First up was the Ol’man shrimp n’ grits £15. What we got was a spoonful of stone ground grits with an insipid tomato sauce that served no purpose in bringing flavour. Pork was promised but I couldn’t find it with my fork and the wild garlic was no where to be seen. To top it all off, the coldness of the dish made it frigid. This was my first time eating shrimp n’ grits, so I don’t have anything to compare it against but it did feel like a poor representation of what it could be. We got 50% off the dish through a members concession at The Curtain but even £7.50 didn’t seem good value, especially since the dish came with one solitary prawn. I do whinge sometimes when I don’t get my way.

Sammy’s chicken n’ waffle £16 was advertised as “Harlem style fried chicken established in 1930”. I assume that the recipe had been handed down though generations as it’s that good. But what we got were wintry cold pieces of soggy chicken, pickled cucumber with some purple slaw placed on top making things soggy – I couldn’t help shaking my head in anger. When you get beyond the insipid batter, the chicken was also quite rubbery – almost eraser like. The “rooster sauce” gets lost too as does the smoked maple. Oh and the less said about the lifeless waffle the better.

Things got markedly better with fry fish brick lane £19. Buttery seabass is coated in a crispy batter, the steam puffs out of it after the initial snap of breaking into the crisp shell. Puy lentils and a bhaji of sorts nestle in a subtle tandoori bisque which makes the fish sing. It was the best thing we ate by a country mile so far.

Mac and cheese with cheddar and collards £6 was an insult to the kind. The sauce was thin and insipid, needless to say I didn’t want get a second mouthful in. What is one of the pleasures in life becomes a punishment.

The RR red velvet £7 was interesting to a degree. It came with a pleasing cream cheese sorbet, the crunch of caramelised almonds and an apologetic chocolate cremeux that lacked in flavour and richness.

The drunken doughnut £7 is something you’d either eat if you were seriously stoned, or you’d make if you were seriously stoned. You’d be a happy stoner. But, if you’re someone like me who’s a pedant when it comes to pudding, you’d find that the lemon curd was more akin to custard with no tartness of citrus. It promises bourbon salt caramel ice cream and dark rum. I got neither. Let’s no talk about how stale the doughnut was either.

ROUND TWO – IT SEEMS LIKE I’M A GLUTTON FOR PUNISHMENT

Guacamole with triangles of fried bread £5 is hardly head turning, but it did the job nicely.

When the corn bread £6 arrived, I couldn’t wait to slather the honey butter and tomato jam onto it. In reality what we got was a carb with unrelenting staleness – it was properly desiccated and we’d left most of it, no questions were asked when it was collected barely touched.

Devilled eggs £6 were much better, there was chicken skin aioli and duck jerky. All nice touches and rather delectable.

Of course we had to get the fry fish Bricklane £19, the phallic looking thing tasted just as good as the first time if not better. A single dish alone couldn’t redeem all the other wrong doings though – that said I’d come back for it.

When did I go? Jan 2018, Apr 2018.
The damage: Expect to pay £40/60 per head with drinks
The good: The fry fish Bricklane is the best thing that’s happened here as was the 50% discount for The Curtain club members.
The bad: Insipid-wintry cold shrimp n’ grits, lifeless Mac n cheese, soggy chicken n’ waffles, desiccated cornbread fit for the bin and sub par puddings. I could hear the lot thud to the bottom of the bin when they took them back to the kitchen. It was a celebration of dud after dud, a real shame, honestly. Needless to say, it didn’t have any wow moments, but then again, you don’t always get what you want in life.
Rating: 2/5
Would I go again? Probably for the Bricklane fish
Address: 45 Curtain Rd, Hackney, London EC2A 3PT
Web: https://redroosterldn.com