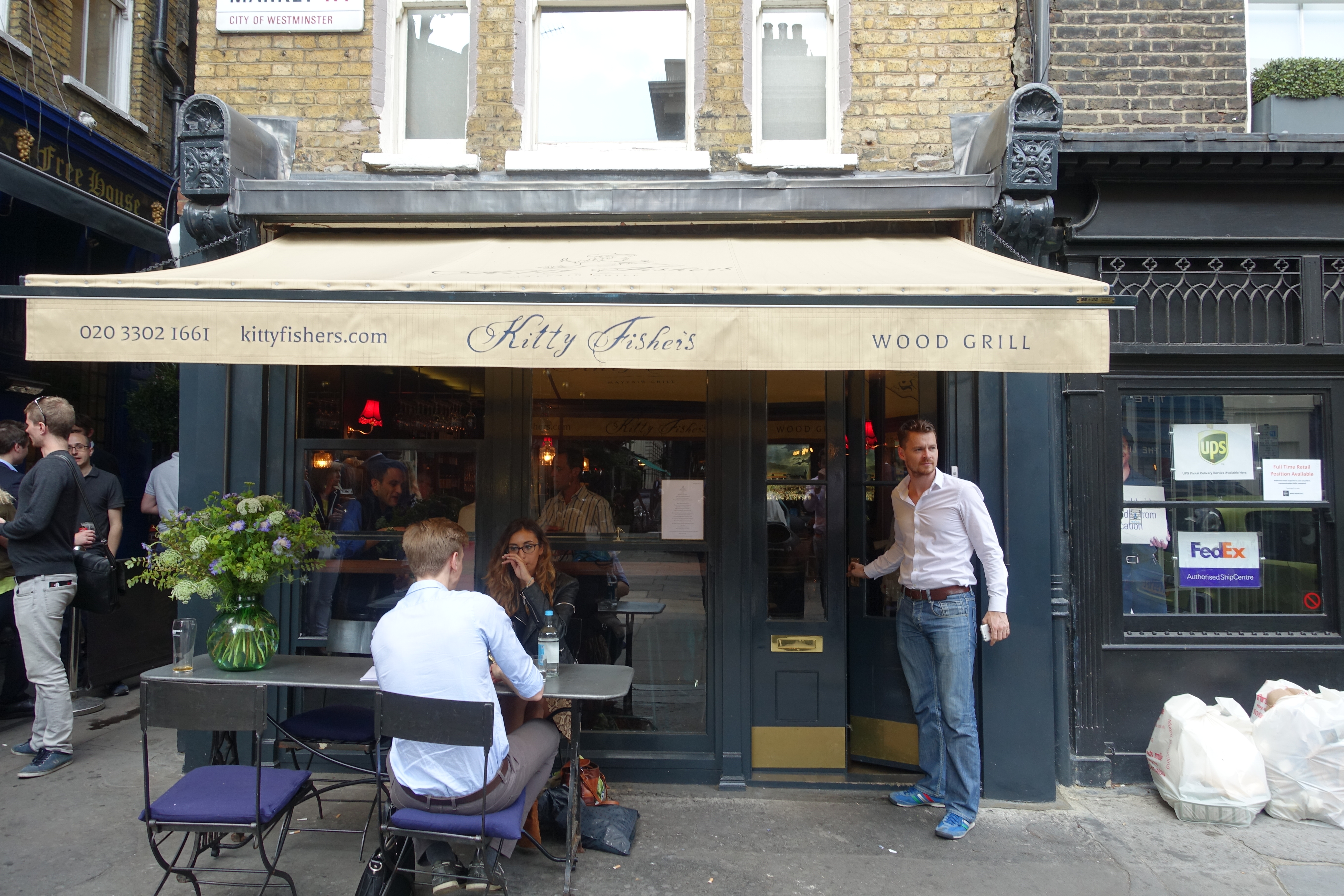 Booking at Kitty Fishers became a 12 week pursuit, finger glued to redial from the moment the booking lines were open each month – there was a 9am-10am window to call (no email booking) for one day a month, it mission impossible. It was a mission I wanted to complete. Automated responses in tune of ‘Kitty Fishers is now fully booked for the month of….’  became tiresome, you get the picture. There was renewed hope when the new booking window was opened from 9am-1pm every Tuesday for tables up to 3 months in advance. Hallelujah! During a warm July evening we sauntered down the 18th century lanes of the Shepherd’s Market towards Kitty Fishers. The area is surrounded by boutique shops, restaurants, some less so appealing after being eye balled by the shisha smokers outside a middle eastern establishment and witnessing floppy pizza consumption at a nearby trattoria. There were an array of old man pubs too; the type that would invariably stock great ale, serve you a delicious pork pie and have been around since the Victorian times. You can imagine that scandalous 18th century courtesan named Kitty Fisher roaming these streets which the restaurant is named after. Head chef Tomas Parry was awarded young chef of the year 2014 and Chris Leach formally of Pitt & Cue of Carnaby St is the sous chef. Together they deliver some very exciting food with their custom wood burning grill fuelled by sustainable English Oak and beech wood. Enjoy the pics as always! ‘Kitty Fisher’s is a small’ the site claims – they are right, it’s properly snug with its low lighting and ox blood banquette seating, a feel charmingly quaint is the linger. There are two rooms, one on the ground floor with seating around the bar and as you walk down the squeaky stairs you can see the compact kitchen running like clockwork before you get to the basement where we dined. The menu is simple but robust, evidently British with a twist. The palate was piqued as soon as you taste the ‘Bread & Burnt Onion butter’ (£3). It’s a lightly wood charred sour dough paired with whipped to a fluff butter dusted with what appears to be gun powder boosted with a sweet onion flavour. It’s actually onion ash that I wanted sprinkled on everything for the night. Whipped Cod’s Roe, Bread and Fennel Butter (£6) – these little soldiers with expertly piped roe were an exemplar of how “simple” prevails. Burrata Beetroot and Gooseberries (£10) – the burrata was super creamy and was boosted by sweet earthy beets, the sharpness comes from what appears to be a red gooseberry compote, then foliage comes in flower petals and bitter watercress. It was a delight to eat in case you’re wondering, here are the front and rear views of the dish: Lamb Cutlets, Anchovy, Mint & Parsley (£12). This was the best starter I tasted in a while every bite was popping with succulent juice and the chefs combined the holy trinity of seasonings of anchovy, mint and parsley that enhanced the lamb. You know something is very good when your mouth waters when writing about it! Ribeye of 12 Year Old Galician Dairy Cow was intended for sharing (£80).  I could argue that this is the best ribeye in London right now, try for yourself to see how sweet the beef is, how flavourful every mouthful can be and how it keeps you going back for more & more. Accompany it with choice sides such as the sautéed spinach, roasted pickled onions, pink fir potatoes slathered in melted Tunworth cheese, the whole lot is topped with whole grain mustard dressing, order it and you WILL thank for me it later. Lemon Tart (£8). It wasn’t shabby but neither was it memorable. But was devoured nonetheless. This bottle of wine was delicious – matched perfectly with our dishes and came with a hint of vanilla and liquorice. Bubbles were also in order – a wonderful meal became a combined celebration for a friends engagement! The damage: Expect to pay £65-£100 per head with wine
The good: Every morsel was demolished, you have to believe the hype, it’s really that good. I loved the quaint décor, the staff we’re incredibly friendly which added to the already great experience. What made it extra memorable for me was that I got a chance to meet chefs Tomas and Chris at the end of the meal – they are great talents and thoroughly nice chaps.
The bad: Getting a booking was akin to finding a unicorn that could grill some of those lamb chops for you and the coffee machine was out of commission but all this is forgivable in my book.
Rating: 4/5