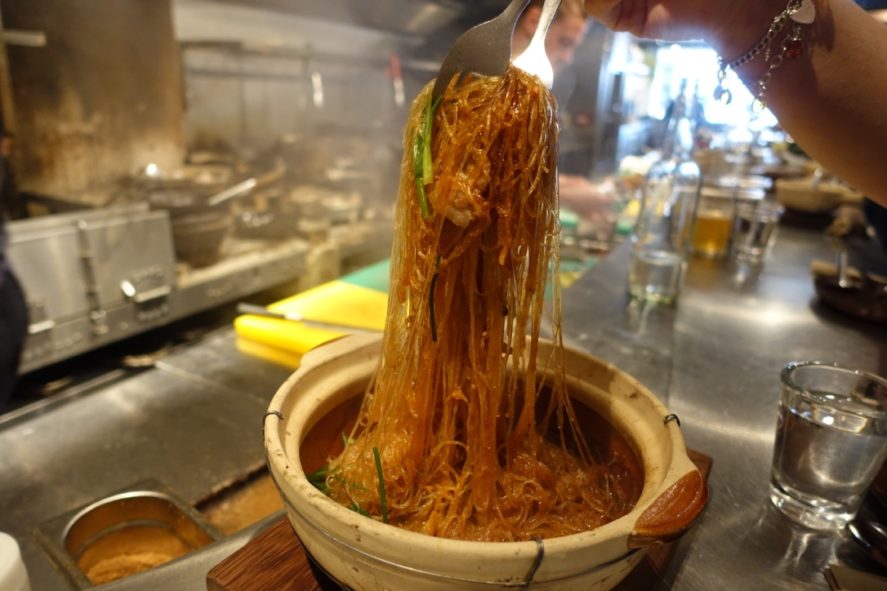 If you have read my previous review of Smoking Goat, then it’s no secret that I’m a devotee of Ben Chapman. Kiln (Est Oct 2016) is Ben’s second instalment focussing on rural Thai food. It specialises, as the name suggests, food cooked in wood-burning kilns and grills. Just like Smoking Goat they have a record player soothing out an eclectic mixture of tunes in a room with a rudimental stainless steel counter and open kitchen, designed by Ben himself. All of the produce is grown specifically for them, gathered from an alliance of farmers all over the UK and it all leaves the kitchen of clattering woks with mighty flavours.. I’ve been here a few times now, which I’ll share with you. I found the food spirit lifting and nourishing, not to mention hot going in and even hotter coming out. It’s a place where you pay little money for a good palate pummelling – in a good way of course.

I first came during a cold January evening, having booked ahead for four which is the minimum they’ll let you reserve for. We were led through the tapered space right behind the diners perched on the long steel bar into the basement where there are a handful of tables. The menus came 20 minutes later, delivered by our flustered waitress who seemed confused and disengaged. We managed to get our order to the kitchen eventually after she scurried multiple times to confer with her colleagues who knew what they were talking about – as she didn’t. I put this down to first day nerves.

There were some experimental style drinks available too, one that really stood out was the bottle of Serpent which is cider aged in bourbon casks!

Fragrant and punchy dry red curry clung onto mackerel £7.30. The salty, spicy character seemed to work like clockwork with the oily fish. They decided that the dish needed more impact so they threw in some sharp elbowed chillis to for good measure. Thank God they invented wet wipes as I needed them the next day.

Aged lamb (£2.90 per a stick) are expertly skewered with slithers of sweet fat between each hunk of meat, then it gets a coating of cumin and is fired over scorching wood. When its ready, it’s dusted with more cumin. What you get is lorry load of perfumed smoky flavour. Its the sort of snack that lets you know cold weather doesn’t exist.

Clay pot baked glass noodles £5.75 came with slithers of unctuous mangalitsa pork belly and brown crab meat, has a side of sour-spicy sauce for mixing. The result is a revelation of flavours, a complete worthy dish in my top 10 things I ate in 2016.

Isaan herb beef £9 came with lashings of salinity and heat balanced out by ample amounts of citrus.

Southern style dry pork curry £7.50 and all its ingredients were intensified from the flames of the wok.

Sour yellow curry of red mullet £7.50 was another rustic dish of pounded Thai herbs and spices that pimped the meaty flesh of the fish.

Stir fried Cornish greens and soy £4.50 was kale which got the same blistering wok treatment as the dry curry dishes. The natural flavours were multiplied.

Isaan herb beef £9 came warm, but in the same vein as most of the other dishes, it had sour, hot and salty notes that grips your palate.

Grilled mangalitsa (a breed of pig) £8.75 arrived with lightly charred edges kissed from the embers. Its the sort of swine that I wished all swine could be like. The flesh was so naturally sweet.

Clay pot baked glass noodles £5.75 were irresistible the first time around so we ordered two. This time they came with Tamworth pork belly instead of mangalitsa, but also had enough flavour of brown crab meat to suggest that they stuck lavish amounts of the stuff into the pot. The first time I met this dish, I knew we’d be friends forever, we’re still in love.

Aged lamb skewers £2.90 were full of flavour to brighten up the gloomy February evening outside.

Dry red curry mackerel £7.90 had all the spicy-salty qualities to hit all the spots on the palate.

Lao style pollock, chilli and roasted rice laap £7.60 has equal amounts of dry spices and herbs to the fish itself, its dressed in a liberal amount of fish sauce and zingy lime juice too.

Their smoked sausage with turmeric £6.50 is made in-house and are one of the many things I’ve come back for.

Langoustines served raw (I’ve never seen anyone in London or anywhere else in the world do this) came with kaffir lime and sweet mint £8.80 with enough chilli to momentarily stun my fellow diner. I’m all for raw seafood but I found this just plain weird. I’d skip it next time.

Cornish greens £4.50 were a nice bowl of kale singed in a hot wok with soy and oyster sauce, you get a hit of iron and a big hit of salinity.

Wild ginger and brisket curry from Burma £7.50, tasted every bit as exotic as advertised. What they’re not afraid of is spice and heat at Kiln which suits me just fine, but order the brown jasmine rice £2 to simmer things down a bit if you need to.

Beef heart larb £6.50 with makhwaen – the Thai cousin of Sichuan peppercorns scorched our tongues even further. The pain aside, this course had a variety of ground spices thrown in with lemon grass, shallots and a whole lot more besides. The result was deeply savoury.

Southern style dry pork curry £7.50 was a star the first time I had it, this time it was no different.

The third time I came, it was during lunch, I had all three of my siblings in tow. We sat at the far end of the bar, this gave us champion views of what’s being cooked.

The aged lamb cumin skewers £2.90 are the main event from the starters and have been so reliable for me since the first day I met them. Seeing the lumps of caramelised flesh being expertly tendered to over the fire and lovingly pelted with spices was poetry.

Smoked sausages with turmeric £6.50 as seen on the menu is easily underselling actually how good these lemon grass infused hunks of mystery meat really are. I order them every time.

This time we ordered the claypot noodles for 4 at £18 which was worth every single penny in my humblest. Every ounce of intense and immense flavour I might add, clings onto the glass noodles for dear life. I could hear groans of contentment humming from my sister and brothers when this one was inhaled.

Southern style dry pork curry £7.50 was full of luscious depth, no different to any of the previous times it was consumed.

Cornish greens £4.50 seem to be a different variety every time I come here, it doesn’t matter as they’re bang-on every time.

Whole fried curried quail £8.50 was a fiery blessing and a dish looking to bully your palate with heat. Cooked as beautifully as it was, with aromatics, the fearsome warmth singed our nostril hairs and had our tonsils begging for the soothing depths of mercy. There’s nowhere to hide from the spice.

The jungle pollock curry £7.60 was a demure tickle in comparison with the other dishes and lent calmer flavours to relieve the palate.

Wild ginger and brisket curry from Burma £7.50 is a viscous, oil slicked curry where you’ll find slabs of unctuous beef. Its the type of dish that cradles you on a cold winters night.

Visit number 4 was a significant one, as after months of deliberation we had finally decided on the name of our new business on this day in this very restaurant.

Queuing is the new way of dining. You’ll have to queue and wait your turn as the restaurant will only let you book if there’s 4 of you or more. There were only two of us. But behold, there are killer snacks that you can gorge on whilst you wait and drink.

Aged lamb cumin skewers are a stalwart bar fodder that deserves to be ordered twice. We did just that.

Heart laap is a braised down, deep flavoured concoction of offal, ground spices and fragrant herbs. Its spicy, savoury, aromatic notes are a reoccurring calling for me.

Northern style pork laap £6.90 is a new addition to the offering. In the same vein as there other laap dishes, the wok singed flavours are bold and bolshy.

Wild ginger and brisket curry from Burma has remained a mainstay on the menu and quite rightly so.

Turbot sour turmeric curry £9.50 isn’t as impressive as the rest, but it wasn’t a stinker.

We ordered a large crab clay pot noodle £16 as simply not doing so is non-negotiable.

We also ordered some Cornish greens which was mix of sorts, wok flamed with salty fermented yellow beans.

Rice is optional but is needed to soak or provide relief from the lip tingling heat of some of the dishes.

For visit number five, we came as a three and were seated by the door on a cold winters night in December. Don’t come here and do this as the punishing wind coming through the door every time a walk-in appears will jar you out and freeze your ribs!

Ginger margarita’s £6.80 were fun but will give you heartburn if consumed in quantities of more than one.

Mezcal, grapefruit and hot mint £6.80 acted as both a palate cleanser and a stepping stone to get inebriated.

The essential and must have snacks are the smoked sausage and aged lamb skewers.

Long pepper and beef fillet curry £8.50 was a murky concoction of fragrant herbs, zingy lime juice, ground spices and chillies left to slow simmer together for hours before the seared pink fillet is left to swim. It’s not finessed in looks, but certainly finessed in flavour.

The Cornish greens are cavelo nero this time. Along the same lines as the other greens they’re wok fired and coated in briny yellow bean sauce.

We follow and finalise with “three flavoured mackerel”. It’s the whole fish plonked into the of a deep-fat fryer, until the bones, head to tail, are crisp enough to be tucked into. It’s partially concealed under herbage, pungent shallots, intense fish sauce and a sweet onion jam that provided temporary relief to the heat.

A random order of stir fried banana peppers made its way to our bill, we didn’t order it, nor did it turn up to our table. It was probably put there by mistake, but that’s obviously annoying, just goes to show you have to check the bill kids.

When did I go? Jan 2017, Feb 2017, Jun 2017, Dec 2017
The damage: Expect to pay £40/50 per head with drinks
The good: You’ve may have gathered by the number of times I’ve been here that I like Kiln. I’ve not been to Thailand yet, so I don’t know if it’s authentic or not, but that never bothers me that much, it’s wether the cooking tastes great. And it does. The food is like no other I’ve had in the UK, and the flavours don’t stop thrilling my tongue. In the summer of last year, they were also awarded with UK’s best restaurant at the National Restaurant Awards – that’s hardly surprising as it’s some of the best food you can bless your mouth with.
The bad: There’s not a lot to complain about
Rating: 4.5/5
Would I go again? I will always return.
Address: 58 Brewer St, Soho, London W1F 9TL
Phone: https://www.kilnsoho.com