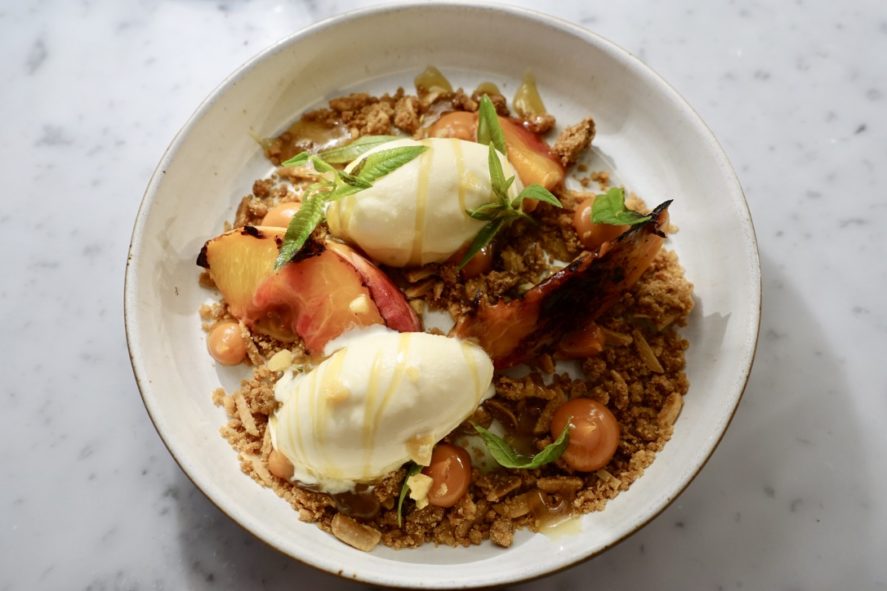 I said Frenchie was a bistro in a sharp suit during my first appraisal and I stand by that. It’s a chic joint, full of clean white lines and daylight in the heart of Covent Garden with enough swagger to impress the in-laws. There are two floors; downstairs is dimly lit and lustful with distressed brick backed onto wine cellar walls – they also have the type of toilets you want when speccing “that house” once you’ve won the lottery. The kitchen’s heart is also paraded for all the see. I always seem to sit upstairs though, as that’s where I like to be, within close proximity of the bar – they always give me the right sort of attention there. So onto the food; invariably it changes with the seasons, I can imagine it’s to keep things interesting for us, the diners.

I have no idea why they called this drink “The Donkey Punch”. Perhaps it was a virtuous move and they were simply clueless on what the meaning is in the pub down the road. Despite this, the concoction of gin, elderflower liquor, carrot juice and celery was a well put together drink.

Sour dough from Hedone £2.50 always features on my order as it’s brilliant. Being an unapologetic bread nerd is a proud thing of mine and I see this as the Porsche of sour doughs.

Crispy pigs head £4. The muscles and gelatine from the swine’s jaws were prised out with surgical precision. Then it’s wrapped in breadcrumbs and fried to a crisp. Gribiche sauce which its topped with, is like tartare sauce’s smarter, butcher older brother with fancy herbs.

Scones £4 with maple syrup are studded with bacon, they’re also made for the clotted cream they comes with, you can’t have one without the other.

Tartellette Duo £4 as advertised were two amuse bouche sized paper thin cups of pastry, one filled with syphoned char & chive and the other with radish and nori butter.

Salsify £10 was ribboned into tagliatelle and was left to mingle with viscous Keens cheddar sauce and it was topped with smoked egg yolk. Everything on this dish looked beige and quite frankly tasted like it too. I really wanted to pretend it wasn’t there after the first mouthful and ended up abandoning the rest of it.

“Cornish squid, winter vegetables, pot au feu and smoked herring roe” £12. I was a little surprised by this dish as my experience of pot au feu was nothing like what was brought to the table. The one I knew was hearty, full of hunks of meat, accessories of rustically cut vegetables, all stewed down with a clear broth. This one was delicate, meek and the squid was strident, like as if it floated onto Brighton beach and left to die in the blistering heat.

Meanwhile, homemade squid ink ravioli £16 contained the creamiest smoked potatoes with a lobster bisque, which had such a deep flavour, you can’t help to think that a lot of love had gone into making it – it tasted like a cauldron of roasted shell, aromatics, cream and fish stock reduced to a tea spoon full. The meal was back from redemption.

Meal number 4 involved entertaining old work compadre’s during a weekend service – as keeping in touch is best done over a long lunch.

“Pork cracking, Granny Smith apple and Sage” £3 was a disc of crispy pig skin that bubbled up from the fierce heat it was subjected to during its cooking life. It shattered against teeth and it was boosted by the tang of the apple gel it came with. It was my kind of amuse bouche.

The bacon scones were magnificent as ever, but not £6 magnificent for something that disappears faster than anyone can blink. The cheeky buggers hiked up the price by £2. If you’re going to increase the price by a 3rd then the portion size should increase by a 3rd, know what I mean?

Green tea cured trout £4 came with the daintiest squid ink crackers and piped lemon cream. It was clever work, pretty as ever but the moisture of the ingredients left the cracker limp and unimpressive.

“Heritage tomato salad, gooseberries, croutons and tomato water”. The sheer enthusiasm our waitress had when describing this dish had us all convinced that it was the way to go for our first course – we were convinced as it utterly shined. I was genuinely surprised about how sweet and elegant everything was in this bowl of food. The tomato juice, full of umami carried the elements of basil, a heavenly slither of pickled onion and other foliage.

Smoked English pork belly was for the mains and it was a plate very much for the camera as the appetite. It was gorgeous to look at. The smoking somehow stole some of the moisture which meant the fat became intensified, and gelatinous – all in a good way. There was lip smacking mustard jus, aubergine was topped with, first a layer of umami miso then sprinkles of hazelnuts and chives.

Chocolate mousse, piedmont hazelnuts and bacon ice cream was the kind of desert that you want to bath yourself in. Puddings are clearly the restaurant’s strength. It seems to be a stalwart on the menu.

Yellow peaches, almond crumble with floral verbena ice cream was the very definition of pudding heaven. The aromatic sweetness of the peaches is hard to describe, it’s intensified as the sugars are just browned from catching heat. The crumble was full of nuts and butter – its the sort of topping every cook should aspire to decorate with stewed fruit. It was also drizzled with a viscous syrup that had the right amount of sweetness.

When did I go? Feb 2017, July 2017
The damage: Expect to pay £60-£70 per head with drinks.
The good: My 3rd meal here was touch and go but it somehow redeemed itself. For example the salsify was a mound of something unspeakable as was the pot au feu. But its all forgivable as everything else is stellar, especially the puddings that deserve a place in anyone’s pilgrimage.
The bad: For what it is the prices may cause some people to wince. I’d suggest going for their lunch menu as there’s plenty of bang for you buck if that’s what you’re after.
Rating: 4/5
Address: 16 Henrietta St, London, WC2E 8QH
http://www.frenchiecoventgarden.com/