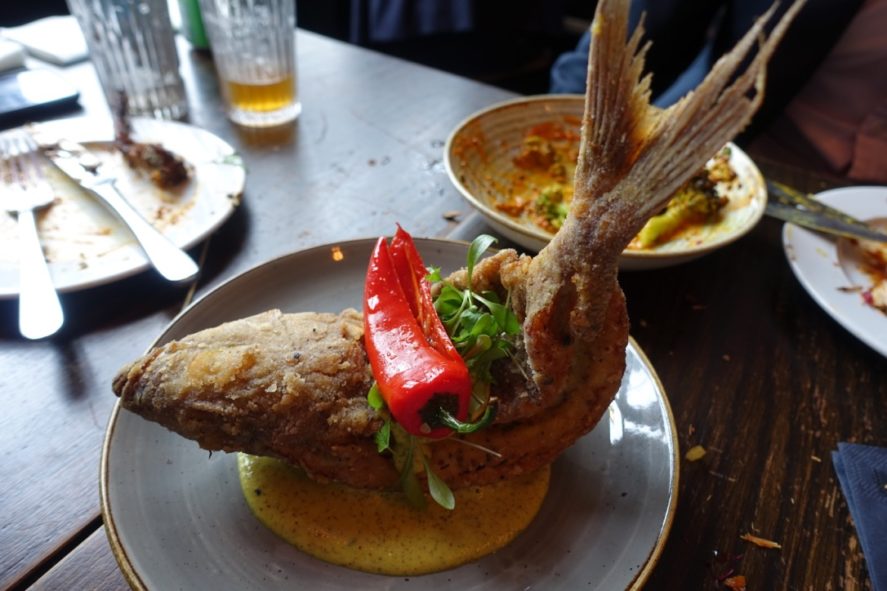 Indian food from what I know of it has come a long way from the neon coloured curries, poppadoms and belly busting cream sauces. Don’t get me wrong, there is a place on every high street, or in someone’s heart for their favourite balti house and stalwart local tandoori. However, what London is getting really good at is showcasing regional Indian fare and in the case of Gunpowder, Indian fare inspired by home style cookery. I’m no stranger here having visited a few times before, but my love of the place has remained undimmed. They’ve since opened a new joint with bigger premises at Tower Bridge which I visited not so long ago, stay tuned for the write-up on that! My original ramblings can be seen here.

Had a couple of the brilliant spiced masala chai’s £2.50, whilst I waited for my lunch companions. I had two for a reason, I’m greedy and they’re bloody good.

The “rasam ke bomb” £3 were crispy shells filled with curried potato, nestled on a shot of spicy liquid. We were told to eat the ball and chase it down with sauce. It was more of a fun novelty than anything spectacular.

The chef should never tire of cooking porzi okra fries £6 as its all kinds of everything I love in food, crispy, good for you and rammed to the hilt with flavour.

The spicy venison and vermicelli doughnut £5 was a crispy shelled hairy thing of delight, filled with spiced mince, resembling keema. It was fiery but all the better for it as it came with a zingy, cooling chutney for dunking.

Kawari soft shell crab £9 has gone up a quid since the last time I came, but it was worth it. The crispened spice crust enhances the integrity of the sweet crab – the whole dish is lick the plate good.

Sigree grilled mustard broccoli £6.50 (for half) is a must order as we all need to eat our greens. What makes it extra compelling are the singed spice soaked florets that gives off waves and waves of spice and nasal clearing mustard notes.

Organic baby chicken is chargrilled with tandoori spices £9.50 (for half), but was less imaginative as the other dishes. It was no less intensely enjoyable though. It came with a side of cooling slaw and a punchy sauce made for slathering.

Maa’s kashmiri lamb chops £7.50 (for the pair) is a dish that you’ll remember Gunpowder for. They slickened in copper coloured oil, with charred edges from the grill. The massive flavours complimented the soft yielding flesh that had been left marinade in roasted spices.

Sag was a green mush with three slabs of tandoori paneer £12, a firm Indian cheese dressed in spices, caramelised until the edges have become beige in colour – but have the flavours of India.

Visit number 5 was a treat from the boss..

I introduced the spicy venison and vermicelli doughnut £5. Eating it never gets boring.

Chettinad pulled duck £5 was a concoction of melting spice protein that once flew, loaded with heat and umami. It’s sandwiched is a soft taco shaped oothappam, just like a bao, and it was all the more satisfying for it.

The Nagaland crispy pork ribs £9 followed. They’re sweet, but the acidic nudge of tamarind kachumber and fresh cucumber pulls it back from being cloying. Addictive stuff, but it also provides instant cooling relief to the mildly volcanic heat of some of the dishes.

Kawari soft shell crab £9 is armoured with a spicy crust that packs a flavourful punch.

Maa’s kashmiri lamb chops £7.50 (for the pair) are still some of the best I’ve eaten in London.

We eat greens as they’re good for you and there’s no excuse when they taste as good as the sigree mustard broccoli.

Whole red snapper £16.50 is fried until the tail curls up on itself and the fins and head become crispy nibbles. The whole thing is nestled on a pool of custard yellow mustard sauce, that not only provides moisture but more flavour too.

When did I go? Feb 2017, March 2017.
The damage: Expect to pay £30/40 per head with drinks
The good: They manage to cram flavour on top of flavour in every dish, which means there’s never a dull moment for the palate. I also think they aim to impress upon you by doing things differently to to norm, and it’s rare that every dish is cast iron banger. I’d suggest going as small squad and order everything. We came as three during both these visits.
The bad: The only negative is that the place is dinky, which is probably why they have another larger outpost at Towerbridge, which I think is one of the best things to happen in that area. I’ve dined there not long ago and it’s gutsy just like it’s older sibling, but has a much bigger back yard.
Rating: 4.5/5
Would I go again? You don’t need to ask me twice!
Address: 11 White’s Row, London E1 7NF
Phone: hhttp://www.gunpowderlondon.com