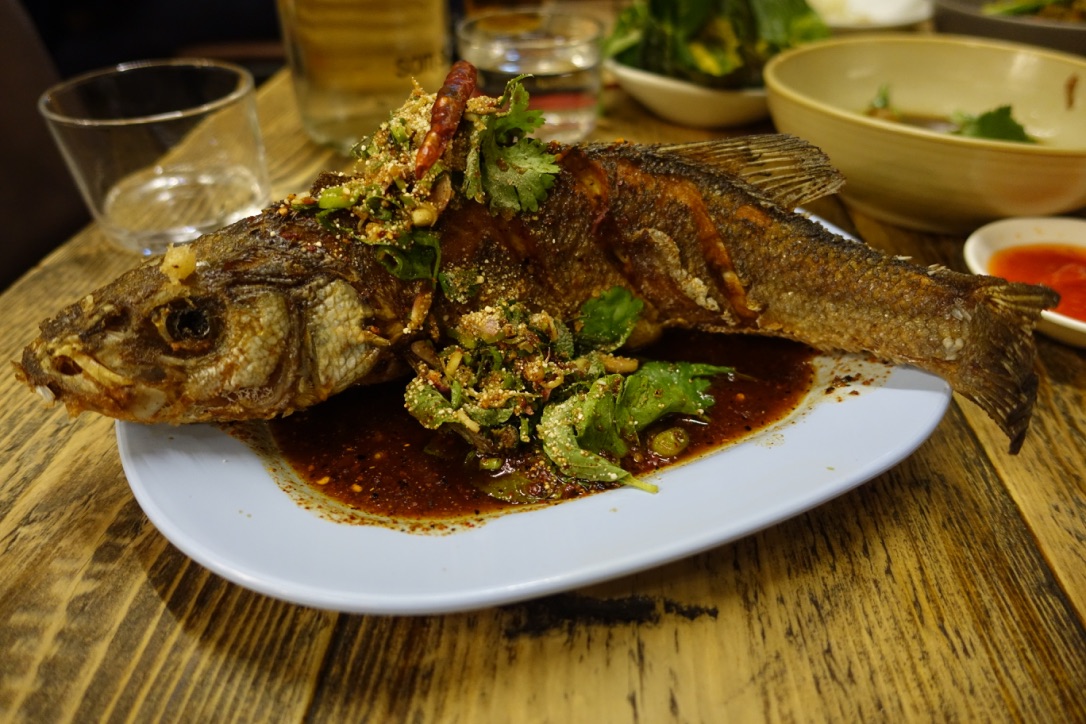 I’m no stranger to Som Saa having eaten at their pop-up years ago, in a scuzzy railway bridge in the deepest parts of Hackney. I was smitten. (Read it here). But now they’re all grown up and have a permanent residency on Commercial Street in Shoreditch, with a mission to put Northern and North-Eastern Thai food firmly on the London grid. Inside, I think they have paid homage to their rail roots by having a pair of arches right behind the bar, but actually it was a former fabrics warehouse. There is a semi open kitchen that can be seen through wooden panels wafting mouth puckering smells. Everything else seems functional but it’s a far cry from their railway bridge beginnings. We’re in for some goodness.

A nice cold local beveragenie whilst I wait for the others to arrive.

We commence with ngop pla £7, a piece of gurnard mixed with egg, grilled in a banana leaf, seasoned with the fragrant whack of lemon grass, aromatic Thai herbs and earthy coriander.

Yum makeua yao £9, was a mound of herbage with smoke imbued aubergine, a soft egg, prawn floss too that usually comes with the dish, but since we have a diner with a shellfish allergy, they put it to one side for us to sprinkle.

Mu Parlow £13 was slow braised fatty pork belly that came with the aromatics of five spice and a nice sour hit of vinegar. I must admit though, it was underwhelming. I was expecting a bit more flavour with this dish, but it really didn’t leave a lasting impression in comparison to the others.

Pad pad neua £9.50 was rump steak with cumin leaves, cooked with “prik kee nu”, this directly translates to “mouse poo peppers”. No idea as to why, but you’ll know about it when they go in, and probably out too. Wiping the sweat off our brows was the foreplay to the burn, but that’s ok as the dish was delicious

Pad chaa gung £9.50 were sweet prawns stir fried with wild ginger and chilli’s. A punch of aniseed came from holy basil, so synonymous with Thai cookery which I love.

Pad pak bung mu krob £9.50 was a melange of things stir fried together in high heat of the wok. You get crispy pork belly, water morning glory and fermented soy beans. It was everything that I love in a bowl.

The star of the show was the nahm dtok pla thort £16.50, and easily the dish that gave the most value. What you get is the crunch of roasted rice, smoky chillies, the pungency of fish sauce, the sour kick of lime juice and Isaan herbs to thrill your tongue. It’s a real livener for the palate. The fish itself is deep fried, so all the moisture is sealed in, yet the exterior bones are completely edible and should not be left under any circumstances.

Sticky rice is a must to mop up the intensity of the sauces.

Visit Number Two was almost a year later, during lunch on a cold November day. We opted for the tasting menu which features all their highlights.

Yam Pak was a tempura herb & vegetable salad with tamarind and sesame dressing. It had all the positive things you could want from a dish like this, the citric push, sweetness, bitterness from the leaves and fragrancy from the herbs. There were hints of star anise too. It’s one of the best things that you can do with a salad.

Gai galae ping were hunks of chicken thigh marinated with aromatic southern coconut curry. A side of ajut relish, made up of ginger, shallots and chilli, all left to mingle in sweet vinegar to temper & heighten flavour. They were brilliant. They were slightly pink in the middle, but this is how it was meant was the message from the kitchen.

Mu parlow was five spice soy braised pork, with pickled mustard greens that came with a fruity chilli sauce and a bowl of steaming jasmine rice. The pork was melting and tender, so was the soft cooked egg it came with.

The nahm dtok pla thort, for me is a dish worth travelling for. I love the way the fish curves around on itself and the bones can be gnawed on.

Pad pak was stir fried pak choi with Asian mushrooms and chrysanthemum leaf. It was the least flavourful of the dishes, however it does soothe the tongue from the other palate shocking flavours.

Gaeng massaman pbet was a slow cooked Cornish duck leg in a silky rich mussaman curry, lifted with acidic quince. It has the right balance of aromatics and palate coating coconut cream.

It’s that kluey thort dan beep desert again with that swoon-worthy deep caramel flavour. It’s luscious and a testament that deserts do not need to be complex to grab attention.

When did I go? Dec 2017/Nov 2018
The damage: Expect to pay £40/45 per head with drinks
The good: It’s moved on from being a revelation eating this kind of Thai food with its regional and uncompromising flavours in our City. As the likes of Smoking Goat, Farang, Kiln and The Begging Bowl have been hitting this brief for a while now. It’s a huge leap forward for Thai food, and a nice break away from diluted flavours you can get in a generic Thai restaurants. The value for the lunch tasting menu is unparalleled too, I recommend it.
The bad: Not a lot really!
Rating: 4/5
Would I go again? You don’t need to ask me twice!
New Address 43A Commercial St, Shoreditch, London E1 6BD
Web: https://www.somsaa.com