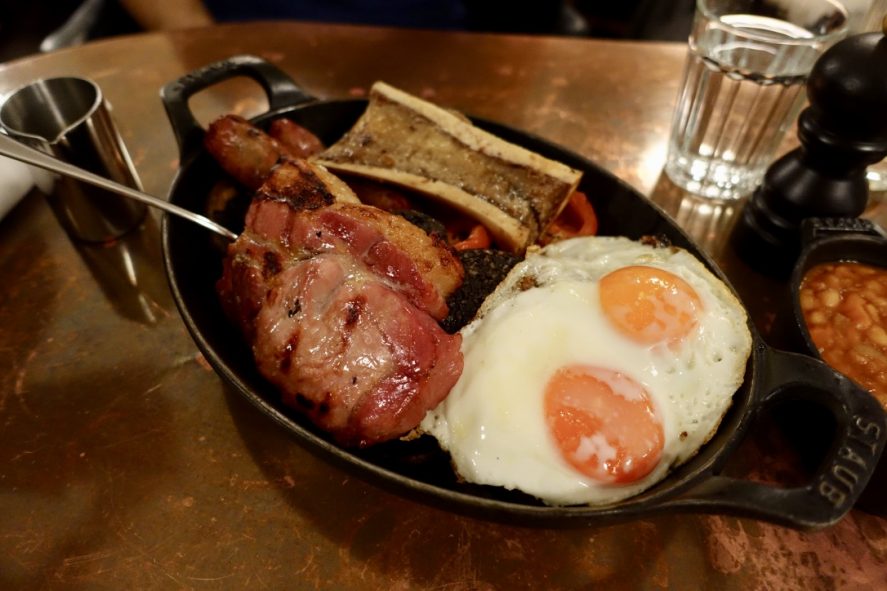 Hawksmoor is a ten restaurant contingent spread across London with thumb prints in Manchester, Edinburgh and now New York. Hawksmoor Guildhall can be taken as simply a City steak house – they’ve been doing their thing with gusto since 2011. Just like the other restaurants, they’re devoted to cooking the very best beef they can source in the country. I heard that Peter Hannan is one of their suppliers and he dry ages his beef in Himalayan salt chambers. Why would you bother with anything else? It’s a back to basics restaurant, focussing first on foremost on the breed of animal from how it’s kept, what it’s fed, how it slept, how how it’s slaughtered, to who the butcher is, then how it’s hung. Taking a zero short cuts approach on animal welfare and quality means the cows live a stress-free life. They are fattened on grass or hay and are slow-grown before they’re butchered and dry-aged for 35 days. That’s all the hard work done before it reaches the kitchen for some coal fire goodness and only gets salt for seasoning as that’s what good quality moo only needs. The steaks are turned 20-30 times on the coal grill for maximum maillard char.

My first outing was from a November 2014 visit, please excuse the tardiness in posting. There was a gang of us dining in their 22-cover private dining room for a works treat. It’s ideal for that kind of thing as it’s a place that lends itself to properly letting go – perfect for a bunch of rowdy lads and lasses like us.

For starters I went for the Tamworth pork belly ribs – they were a prime definition of a pork lovers dream. The belly is marinated over night and then left in to mingle in the oven in the marinade for 100c for four hours. Once the bones have done their job, they slide out leaving just soft melting pork. It’s a concrete start and I know now why it’s their best selling starter. Forget the fork, get me a shovel!

The prime rib, a large roasting joint typically cooked with the rib bone in came in its own skillet and was memorable for all the wrong reasons. It arrived cold like it had been standing since the lunch shift, we were here for 8pm. But then it was a challenge to eat, like as if it was cut along the grain so our jaws had to do all the work, which defeated entire object of dry ageing. I was still chewing five minutes in after the first bite, I felt like a porn star after a hard shift with my jaw ache.

The porterhouse as you can see on the right was better, but only marginally. The damn thing didn’t deserve to be cold, none of it did.

The chips upstaged all the meat, they tasted triple cooked. The sort that get cooked in salted water until it’s on the verge of falling apart, then get cooked in hot fat so the craggy edges become crispy.

We also got proper field mushrooms too the size of my mates Fiat Uno wheels from 1990.

We get a bowl of green things, it misses the point of being here as it should be all about the meat, but at least it’s easy to chew.

Chris is a man who loves to gnaw.

Andrew is a man who doesn’t do mess but loves carnage, especially on white shirts.

The shaky mains are forgotten about with this luscious sticky toffee pudding with a quenelle of Cornish clotted cream. This is when dark muscovado sugar, dates and butter with a pinch of salt become best friends.

As you gathered, I wasn’t that enamoured by my first visit, but eventually came back for a stag do. It ended up being the best meal of the weekend and for a while after that just for the record.

Of course I had to order the ribs again after a 4 year hiatus. Seeing it on the menu meant that it’s stood the test of time like how good things should. They use Old Spot pork this time and it was no less delicious from what I can remember. Slow cooked indulgence is what they are.

The stag went for bone marrow.

This time I got to choose my steak, a 400g rib eye cooked mid-rare £32. It was gorgeously grilled, rested well and required light work to break down. It’s steak that wants you to remember it for all the right reasons, not like before.

The onion rings £4 also wanted to stamp itself firmly into your memory banks as they were cast iron delectable. Possibly the best I’ve had yet. What you get is a thick overcoat that makes its noise heard when you crunch into it before you get to a thick ring of sweet onion. It’s a side worth swooning over and I ate them all!

Beef dripping fries £4.50 were decent but bring me the triple cooked chips next time.

Get some baked sweet potato £4 if you fancy some starchy sugariness.

My most recent visit, but certainly won’t be my last was for their famous breakfast. And yes I’ve had it before!

For the famous breakfast what you get is a skillet full to the brim. There is a smoked bacon chop packed with sweet-salty notes intensified by the charring it gets. The sausages are made with beef, mutton and pork – they’re bonkers good too. For good measure there’s also bone marrow, a huge bone is cross-sectioned so the marrow is exposed. Beneath that there’s well made black pudding, to die for short rib bubble & squeak made from left over roasties, grilled mushrooms and tomatoes. Lubrication comes in a mini skillet of tangy trotter baked beans. I’ve never been so excited about beans. The toast is usually an afterthought, but the sour dough they use is remarkable like the ones artisan bakers make. The fact that it’s unlimited left me wobbly at the knees, I fetishise over bread this good. It was used to dunk into the duck eggs cooked sunny side up – the perfect place between runny and set.

When did I go? Nov 2014, Jul 2018, Dec 2019
The damage: Expect to pay £60/85 per head with drinks
The good: If you’re going to eat steak on special occasions like me, buy the best you can afford from pampered animals. I think Hawksmoor, a temple of dry aged beef, can do that for you, it definitely did it for me. There is a ripe minerality in the meat, fat that melts and it’s all deeply flavoured. The pork rib starter is slow cooked pork paradise and the onion rings are just something else. And if you fancy possibly London’s best cooked breakfast at the moment then Guildhall will give it to you too.
The bad: If I was in a pugnacious mood, and bad food tends to do that to me, I’d say my first meal here was diabolical, so much so that it put me off coming back for years. Now Hawksmoor is one of the good things in life.
Rating: 4.5/5
Would I go again? That’s a sage nod from me!
Address: 10 Basinghall St, London EC2V 5BQ
Web: https://thehawksmoor.com/locations/guildhall/