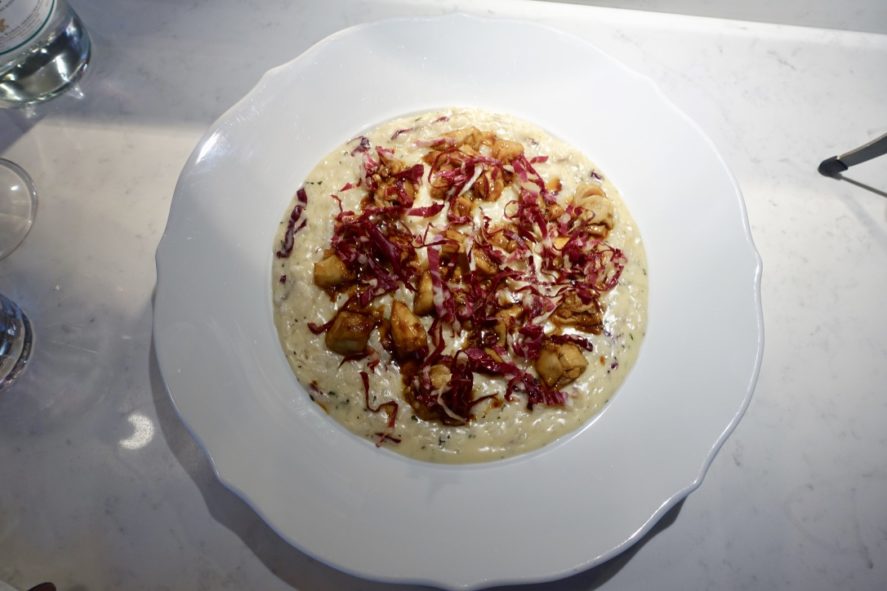 Jason Atherton launches his 9th London offering, and what many would say his most laid-back restaurant in Victoria’s NOVA complex. It’s a New York-Italian inspired place with an aim to bring in the office workers, shoppers and those who are in need of some hip sticking pizza, pasta or risotto nourishment. Inside it’s all about the red leather – it’s on the stools, the chairs and the banquettes. Sunlight comes through a huge glass wall overlooking the terrace, instead of distress brick like you see in most restaurants, there’s distressed wall paper with framed hand drawn sketches of I don’t know who. It opened in February 2017 and it’s called “Hai Cenato”, which translates as ‘have you had dinner?’ in Italian. Head chef is Frankie Van Loo, who was part of the crew who won the Michelin Star at Pollen St Social in 2011 and he went on the head up the kitchen at the now defunct Social Wine & Tapas before coming here.

I went for the “guest chef” pizza £13.50 from Ashley Palmer-Watts of Dinner at Heston. It was a sizeable, thickly dough’d rugged looking pizza, the edges were bubbling and blackened from the scorching heat in one of the twin herculean-sized pizza ovens they have. Datterini tomatoes featured with a host of other trinkets like coins of octopus, nduja sausage, ricotta, black olives and green squirts of parsley purée. It was one of those pizza’s that required commitment – every lift will require catching the dripping ends in your mouth. Each mouthful was full of quality ingredients and the doughy base had a satisfying chew. My only slight whine is that the toppings were overkill, less is more; take out the wet stuff like the ricotta and parsley that killed the base, they didn’t need to be there.

Next up was the risotto of mascarpone £15. It was a delightful ivory coloured mess with an ample amount of rabbit coated in sticky jus which tasted of hours worth of slow reduction. The parmesan makes itself known through layers of umami and crunch comes from braised radiccio. The whole thing glows with richness and full of deep savoury flavours. Just half of the portion would set you up for the day, eating the whole thing with a pizza would wipe you out as it did me.

In belief that were good adults, we ordered a salad of pink lady apples with crisply fried kale £8. It came with the crunch of hazelnuts, aromatic lovage and lashings of waist thickening parmesan crème fraîche.

When did I go? Aug 2018
The damage: Expect to pay £20/30 per head with drinks
The good: You can easily come here, order one dish and walk away satisfied. They’re got their portion control right which is a feather in the restaurant’s cap. The risotto filled my palate with joy and it feels like the type of food that would put a smile on someone’s face after the most grinding of days in need of comfort.
The bad: If you have a penchant for less toppings and a base that isn’t mushy, go for something with less busy on the top. Soggy pizza distresses me.
Rating: 3.5/5
Would I go again? I’m coming back for the pasta
Address: 2 Sir Simon Milton Square, Westminster, London SW1E 5DJ
Web: https://haicenato.co.uk