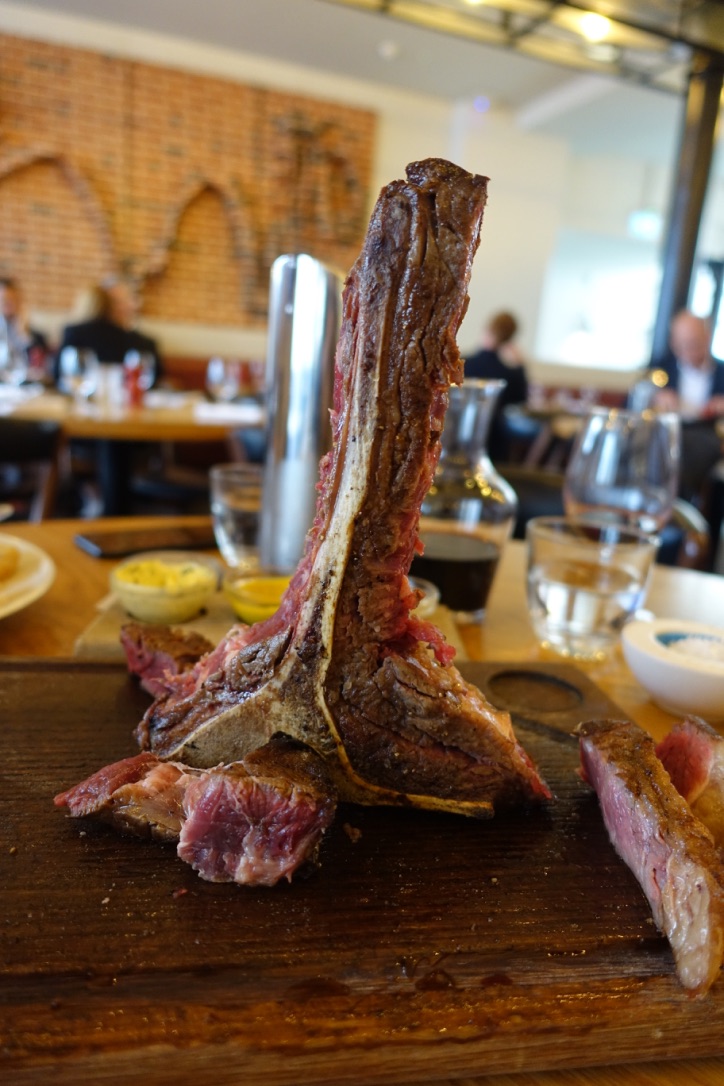 Hixster Bankside is Chef Mark Hix’s 7th restaurant in London and holds the same chicken-or-steak notion as his famed Tramshed restaurant in Shoreditch and the now defunct Hixter in Devonshire Square on the other side of town by Liverpool Street. One of the quirks are trussed up whole roast chickens, served on their backs with their claws pointing to the ceiling, or Himalayan-salt-cured steaks sliced table side. That’s a whole load of action in a Victorian red-bricked printing factory converted to a 140-cover twin dining roomed venue, filled with art and faux-leather padded seats – it’s a place for long-lingering lunches. The bar as a 2am license just like the Soho stalwart, along with more intimate 10 cover dining spaces. The place wreaks of City shenanigans and will make any red blooded carnivore’s heart pump. I’m one of those greedy sods.

Whilst waiting for the other meat lovers to rock-up, I ordered the Yorkshire pudding, the size of my head with whipped chicken liver £3.95 from the snax menu. Despite its size, it couldn’t stand a chance against my greed. My only gripe was that it was cold – a 5 minute blast in the over would have crisped it up into something better.

For the main event, the three of us shared a 1kg porter house £80 cooked rare, carved at the table for theatre. I think the dry ageing on the Himalayan salt slabs draws moisture out of the steak, producing a more broad-shouldered beefiness and aged funk. I liked it, although if it were my request I’d go mid-rare, but I conceded to the masses who likes in rare. This is a small thing, we all ate steak so we all won on the day.

Good steak doesn’t need condiments IMHO, but get the hollandaise, English mustard or whole grain if that’s your jam.

Berkswell truffled chips £5.75 were slender cut like fries were made more deluxe with the fungus from the Gods. If you don’t like truffle then go ahead and order your lesser chips without it.

Salt ‘n’ vinegar onion rings £3.50, with light flecks of black sesame had a nice crisp shell, and a doughy interior where the onions melts into the batter, a nice back-hit of vinegar cuts through the richness.

Garlic mushrooms £3.50 echo the forest floor and raindrops, sprinkles of parsley green broke up the mocha and chestnut browns of the toadstools.

Does this look titillating, or is that just me?

When did I go? Sept 2017
The damage: Expect to pay £45/50 per head without booze
The good: Dry-ageing on Himalayan salt bricks certainly intensifies the beef flavour, I’m not sure if this is a specific schtick for Hixster, but it does make them stand out in my eyes. The sides are great too, overall it was a solid meal and a treat to eat this meat. I’d recommend for a meat fuelled afternoon or evening.
The bad: Not a lot really, don’t come here to chase big moments though.
Rating: 3.5/5
Would I go again? Yeah why not
Address: 16 Great Guildford St, London SE1 0HS
Web: https://www.hixrestaurants.co.uk/restaurant/hixter-bankside/