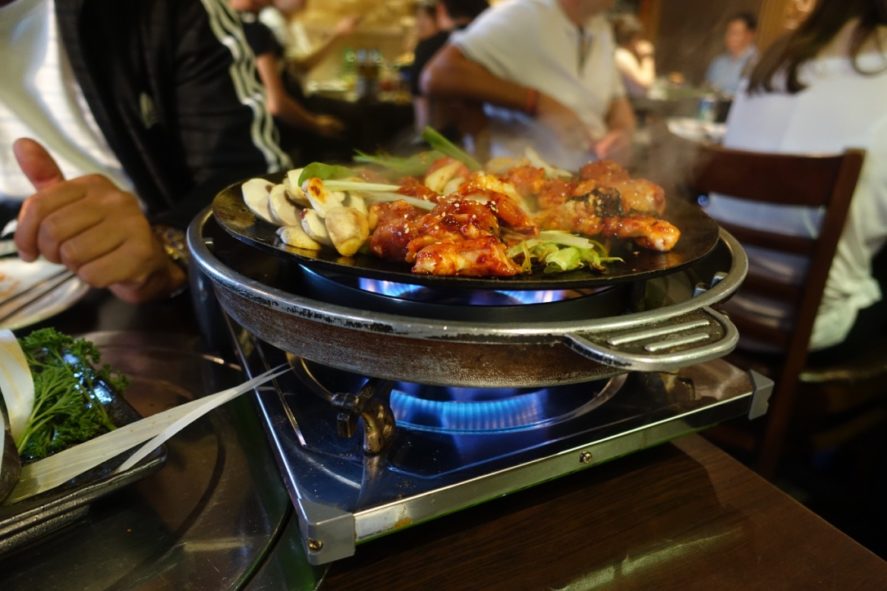 The name Jin Go Gae has an endearing story – it’s named after a place in Seoul where the original owner met his missus. He vowed to name his first restaurant Jin Go Gae to commemorate this. A profound sentiment indeed. I’ve was informed by one of the lady’s who run the restaurant that they’ve been around for 12 years now, specialising in Korean charcoal BBQ, clay pot cauldrons of cold weather repelling stews and other Korean culinary trinkets. It’s always heaving when I come, and often queue for a table, so I’d suggest booking, unless you don’t mind waiting whilst inhaling intoxicating charcoal perfumed air with caramelised bulgogi. You’ll thank me later as it’s worth the effort.

Sigum chi namul £2 is part of their banchan offering. It’s spinach served cold that has been wilted, seasoned with sesame oil, sesame seeds and a touch of savoury soy. Banchan is a ceremonial standard of small plates offering cheerleading support for the main event(s).

We also get lightly fermented shredded mooli with flecks of chilli. It acts as both an appetiser alongside the kimchi which is house made and funky.

The seafood pajeon £7.60, which is a shallow fried glutinous pancake with crispy browned edges, with pert spring onions random faux seafood sticks, some chopped baby octopus is chucked in there too. The latter gives more textural crunch than impart any flavour.

In the same vein kimchi pajeon £7.60 is fun to eat and carries the essence of the fermented cabbage quite nicely. I think I prefer this one.

Tuk-pokee with noodles £12 has all the comforting qualities that takes away the grind of a hard week. What you get are fudgey, almost wine-gum-like-in-texture cylinders of rice cakes and chewy noodles. It’s all soaked in the sweet, savoury, chilli notes of gochujang.

We also go for crowd-pleasing mandu £6.70, which are filled with seasoned minced beef and chap chae glass noodles.

We also gnawed on kalbi which is short rib skilfully sawed into ribbons, then is marinated in delights of soy, Asian pears, ginger, garlic and other things that bestow their flavour. It’s then cooked on a metal grill fired by hot coals that char the flesh.

We go off piste and order beef tongue too £8.90, which arrives un-marinated and is sawn into slithers, exposing the marbled interior. Despite what it is, the flavour is a very approachable beefiness.

Godung-uh Chile £18.90 was a fully accessorised stew of meaty pork bones, quartered heads of kimchi cabbage, spring onions, garlic, spices and chillies. The result is a cauldron and cold weather repelling therapy designed for sharing. For good measure, once we’ve made a dent into it, they bring over a block instant ramen for soaking and slurping.

Fast forward 3 years and I’m back..

The Banchan, pajeon and mandu has remained consistently tasty. The kimchi here is particularly stand-out.

This time we went for the tuk-pokee £8.90 sans instant ramen as alone it’s all the more satisfying as it is.

Armed with a sense of adventure we also ordered “soon dae bokum” £16.90. It’s blood sausage with strands of glass noodles and spices – the kind of mystery meat in tube form worth pining for. It’s accessorised with hunks of offal too, peppered in chilli sauce – we got liver, lung and kidneys. I’d advise getting the “soon dae” (blood sausage) unaccompanied though as the offal was leathery.

Wang kalbi £9.90 is kalbi with all of the faff taken away – it comes on a sizzling stone plate with just caramelised protein and no bones to gnaw on. I’d still go for the one cooked on the charcoal though, you’ll get more theatrics and more flavour.

In the same vein “sam gyup sal” £8.50 are slithers of joyous pork belly left to scorch on the hot stone plate. It’s designed for those who enjoy a mix of protein and caramelised fat. I’m one of those.

Visit number 3 involved all of the usual suspects with the new addition of “dak kalbi” £20.

Dak kalbi is Korea’s answer to chicken fried rice. The first stage is to sear-stroke-sizzle the spicy chicken with oyster mushrooms and spring onions on a gas powered table cooker until it builds up a nice caramelisation. Our waitress does the heavy lifting for us. Remove the caramelised nuggets of thigh meat and enjoy. The second stage, but only once the chicken is almost finished, involves using the sticky pan residue to cook the rice. It acts as an adhesive that sticks to each grain of rice which is flattened with a spatular onto the hot pan, until all the surface area hisses away forming a delicious crust.

The last pieces of chicken were gold.

We asked for plain sundae £12 this time around but it came with a side of incessantly rubbery liver that tasted like seagulls armpits. We were hoping that we can have them as they are one day!

This time around they nailed the sundae £16.90 by not giving us any accompanying organ meat that has the texture of flip flops. Instead we got dish of salt and crushed chillis for dipping. Third time lucky as they put it. Perhaps it was a case of us not communicating properly or our waitresses got it wrong, but to save you the bother just asked for “steamed sundae!”

Onto the BBQ, first up we had marinated pork belly “dae-ji kalbi £13. It was quite tasty but doesn’t hold a candle to the beef ribs so go for something that once moo’d. On a cold day the coals make for a makeshift heater as well as a flavour imparting table ornament.

The beef ribs £13 were ordered otherwise someone would have been cross.

This time we got them with lettuce for wrapping, fermented bean paste, vampire slaying raw garlic and chillies for punch. Also slinky pieces of spring onion coated in sesame oil and aromatic chilli powder. Stick it all in your lettuce taco and you’re gold.

During visit number 6, we ordered steamed sundae “solo” obviously, but had to deal with organ meat again – with our robust internal mettles we gave it another chance. This time the consistency was like eating pencil rubbers from 1988. Why can’t we get it right?

And we can’t come here and not order BBQ, or pajeon for that matter otherwise it will be missing the point. Kalbi all the way please.

When did I go? Dec 2014, Mar 2017, Jun 2017, Jul 2017, Dec 2017, Oct 2018.
The damage: Expect to pay £40/50 per head with drinks
The good: If you’ve been to a Korean restaurant before, you’ll see that the menu is broadly familiar with most. But what makes them standout is the quality of their BBQ and the use red-hot coals to sear meat. The rest seem to use gas powered BBQ’s which just ain’t the same. There was another that did, which I adored called Sula, but that’s a pointless Thai buffet now. Their other offerings of pajeon and mandu are genuinely good too. Now that I’ve been a few times, the Korean ladies seem happy to see me, even though they don’t understand how I like my sundae. **A word of warning** It’s ok to order a few things at a time as the tables are not big enough to handle orders. There’s no staggered service – they bring it ALL at once.
The bad: It’s not as good value as the other Korean restaurants in New Malden and it’s placed a little in the arse end of no where.
Rating: 4/5
Would I go again? I’m reaching for double figures.
Address: 272 Burlington Rd, New Malden KT3 4NL
Phone: https://jingogae.wordpress.com/