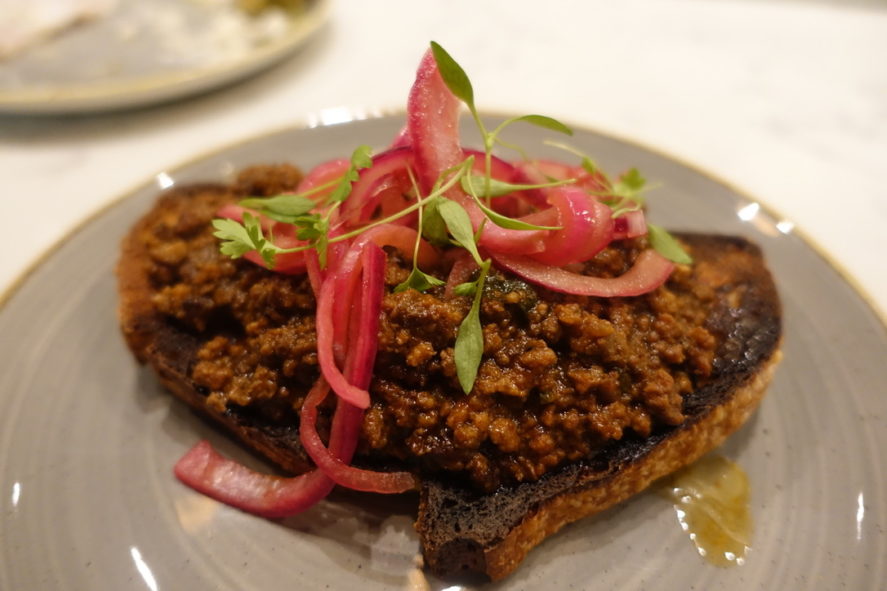 I remember walking pass Tooting Broadway Market (Est 1936) as a youngster, the hum of halal butchers, bric-a-brac and kebab shops with the smell of Chinese takeaway dominated. Its steep history has been firmly gripped by the hands of regeneration, the thumb-prints of gentrification are all over the narrow passage ways inside, which are now filled with good places to eat. That would be a big cheer for the locals I’m sure. You get Franca Manca, Koi Ramen, Boom Bap Burger, Sea Garden & Grill and countless other hole in the wall type places to stuff your bellies. I came for Plot which opened in January 2017, a fifteen-cover “restaurant”. I say restaurant but it’s a wide open kitchen with a marble topped bar seating about 8, with a couple of outdoor beer garden type tables that covers another 8 or so diners. The food moves with the seasons and is mostly the best of local British. The animal comes from Chadwick’s on Tooting High Street, fish from Moxons in Clapham South, and charcuterie from West Dorset. With the selection of beer we had, the furthest was the Southpaw of SE27 Gypsy Hill Köln, then Orbit Beers of SE17 in Walworth! The most local was Toast Ale was from Southwark. They’ve clearly made the effort to make friends with their neighbours. Heading up the kitchen is chef Giles Elstob.

Plot goes down the beaten track of sharing plates, our chef recommended that we get 2/3 of those each. We wanted the lot so ordered one of everything but triple-upped on the macaroni.

Those beers I mentioned earlier.

The bread is baked in house and had a really satisfying chew which I love – we we’re off to a good start.

Bobby beans £7.50 were a half dozen or so blanched string beans, bundled and wrapped in air dried ham, more of the same was crispened with hazelnuts for crunch.

Butterflied prawns £8.50 were pert and bouncy – their sugars were lifted a rush of aniseed from fennel and sweetness of heritage tomatoes gave balance. There was a nice back-hit of chill and garlic too. The lot was cooked just enough so the radiant virtues of all the ingredients stayed where they should.

Harissa duck £11 breast had nicely rendered skin and flesh that required some jaw strength to get the best out of it, but I don’t mind that. With that you get puréed carrot with warming anise and a spice & nut mixture called “dukkah” from North Africa.

More surf came in the form of pan roasted monkfish £11 with a dense stew of dahl. The lift came from red onion and the lip wrinkle of carrot pickle. Again some delectable eating to be had here too.

Semi crushed vivid green garden peas came on toasted rosemary sour dough and the twang of goats cheese £7. Not my cup of tea this one, but fill your boots if its yours.

Then we were back on track with truffled macaroni cheese and a sticky slow braise of ox cheek £8.50. If you need a hole filling, and we certainly did, then this is a dish that will do that job. We got one each. The only let down was that the truffle went missing in action.

A petit four of from what I can gather, a mini Eccles cake with cheddar. For me it just screamed Christmas spices and dark stewed fruits.

Of course we had to get their beautifully set pana cotta, imbued with the tickle of tarragon and topped with a compote of Kentish blackberries £6.50.

The bread is so lovable here, this one had sweet malty notes and a lick of fennel.

Roasted lemon sole £15 with the sheen of caper butter had this gelatinous lip sticking quality and a nutty potato salad with dill.

The kick of adrenaline came from the umami laden Angus beef ragu £13. The chef mentioned that it’s a low and slow cook of minced beef, offal and red wine, you could really taste that. It was slathered on bone marrow toast and got some crimson pink pickled slivers onions on top.

When did I go? Aug 2017, Mar 2018
The damage: Expect to pay £30/45 per head with booze
The good: It’s obvious that these guys know how to cook, they seem to nail the balance of sweet, savoury with acidity. Huge props is due for using good quality produce from local producers as well. It’s food worth “plotting” about! I’d suggest sitting on the bar too as you’ll get to see all the cooking and have interactions with the chefs.
The bad: It’s a tiny place so book ahead in advance, it’s unlikely you’ll get a table if you don’t. My second meal there seemed quite subdued, the dishes just didn’t give any wow moments until the beef ragu arrived.
Rating: 3.5/5
Would I go again? Yeah why not
Address: 70-72 Broadway Market, 29 Tooting High St, London SW17 0RL
Web: https://www.plotkitchen.com