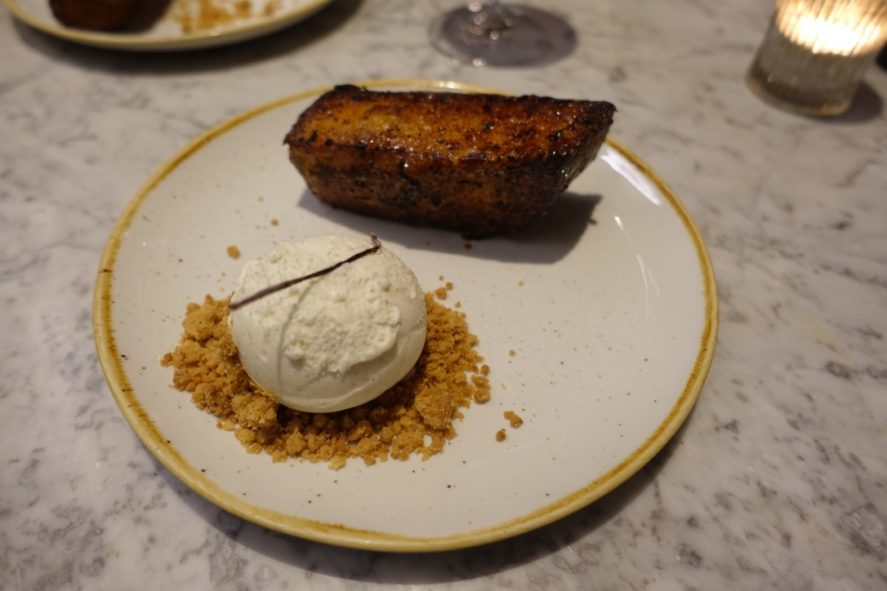 There’s no denying that Chef Jun Tanaka comes with pedigree. In 1991, he worked at Le Gavroche and trained with some of the best. He then had a gig at the now defunct Two Michelin Chez Nico of Mayfair under Nico Ladenis. A decade on, he was Head Chef at Pearl in Holborn, which he joined in 2004 and left in 2012. Shortly after the restaurant closed for good. The Ninth is so called as it’s Tanaka’s 9th engagement with a restaurant. His shtick is simple, the food is “made for family-style sharing”, Mediterranean style injected with seasonality. Just like the name, it doesn’t wreak originality, but I’ve been fed here a few times now and chef’s talent is majestic. Inside wise, it’s all done in an exposed brickwork setting; there’s subtle copper piping trinkets, dark wood floors and a shiny bar. It seats 90 people across two floors – downstairs is where I like to be as I just prefer the vibe.

We were the beneficiaries of our sommeliers knowledge, she seemed to know her onions and was delightful with it, so we settled with this delicious pinot noir from Grace Bridge California £35.

First up were the oxtail croquettes (£2.50 each) which were crispy shelled snacks glued down with herb mayo. It’s the sort of croquette that every kitchen in London should sell as they are simply divine. Inside is the very essence of cow slow cooked until the gelatinous goodness breaks down and the cooking stops when there no more moisture, thus intensifying the flavour.

Better still were the deeply satisfying al dente tortellini filled with slow cooked ossobuco topped with hazelnut gremolata £10. They were crested with coins of bone marrow and salty parmesan.

The pitch-perfect scotch egg (£5.50) came with flawlessly seasoned duck meat, a golden yolk, all wrapped in pleasingly crispy panko bread crumbs. And that’s the only the snacks done, yet I feel satisfied already.

From the starters, first came the nicely browned pan fried herb gnocchi (£8), I found myself spooning the sticky sauce they came in filled with caramelised chanterelles and trompettes – the whole thing was lick the plate good.

Red mullet (£19) came with a greaseless crisp batter, the kind that all fish should be coated in. The pearly white flesh was beautifully meaty and fresh. The richness was offset with carrots, fennel and shallots punched up from the vinegar they were pickled in.

My least favourite, but by no means a bad dish was the salted beef cheeks (£19.50) with deeply flavoured oxtail consommé and charred hispi cabbage. It was accessorised with root vegetables, a salsa verde and those coins of unctuous bone marrow.

They even smashed it out of the park with their purple sprouting broccoli (£5) and hollandaise, as every meal should feature a bit of green.

For desert, the pain perdu (£7) with vanilla ice cream is what we went for, which is a culinary operation in itself before we get to eat it: First brioche is soaked in crème anglaise over night and is treated to a basting in butter. Then it’s coated in sugar, which is torched to give it that irresistible textural crunch that offsets the luscious soft centre. I can happily say that this is a death-row course and is one of the best deserts that London offers right now.

We chatted with our maitre’d at the end of the meal who seemed like an engaging chap – he mentioned that Jun was in the kitchen and would we like to meet him? Of course we said yes! It was a genuine pleasure meeting Chef Tanaka as not only is he a talent but down to earth too. When I asked if he had any favourite restaurants, he mentioned that he preferred unfussy dining on the rare occasions he ate out and named Padella, Bao and Sushi Tetsu as the ones he pined after!

This time we dined upstairs. The ambience is a lot more chilled up there, given the choice downstairs would be my sweet spot.

It was that kind of night.

Freshly baked pitta (£3.50) arrived puffed up, full of steam it gathered from loitering in the oven and was dusted with oregano & sea salt. The only thing was that there was nothing to dip it with.

You may have gathered that the oxtail croquettes are an essential item.

Rabbit confit lasagna with tangy tomato compote (£11) was the start of some of the dishes that wants to mother you on a cold winters night.

Caramelised scallops (£16) had this confectionary shop sweetness about them, together with the pumpkin & ginger risotto, it’s the kind of food I just can’t get enough of. It was easily the dish of the night.

Ossobuco tortellini is a total maverick of a dish and it’s good to still see it on the menu.

The red mullet is a gem.

Th purple stem broccoli (£7) with hollandaise came with a welcome addition in the form of a crispy egg this time. And why shouldn’t it.

Polenta, egg yolk, leeks and Comté (£6) was a hearty affair and was a meal in itself.

A main course venison’s with its moisture locked in through salt baking, came pink in the middle, served on a bed of chopped caveolo nero and hazelnuts which provided an absorbing platform for meat juices. A dollop of puréed beetroot was thrown in to slather on each bite. There was absolutely nothing that didn’t belong on this plate (£26).

Lamb en croute was a skilful play on not just pastry cookery but how to do the meat justice by keeping it moist and succulent. The earthy Jerusalem artichoke purée seemed to suggest that it had lashings of butter in there to make it velvety smooth (£28).

Ordering this pain Peru has become a rite of passage when desert time arrives. It’s spectacular.

We also ordered a zingy caramelised lemon tart with fromage frais sorbet (£7) which was another banger, but couldn’t hold a light to the pain perdu.

We couldn’t fault the plonk here and this one hit the back of the net with an assist from the sommelier (£48).

We kicked off with the “freshly baked” pitta, although it seemed it was freshly baked yesterday and didn’t belong on the table.

Things got back on track with those delectable oxtail croquettes, you can’t come here and not order them. They are the very definition of how a snack should be.

Truffle arancini was a welcome addition to the menu (£2 each) which was made extra decadent with the use of truffle mayo.

The other snack that cannot be overlooked is the stunner of a duck scotch egg. It’s one of the best I’ve had.

Ossobuco tortellini is a pasta lovers wet dream. Well at least in my eyes.

Confit rabbit with tomato compote is the dish that just wants to hug your palate in the best way imaginable. It’s so comforting.

I can’t praise their fish cookery enough here and happy to see the red mullet still featuring on the menu. This time they use a coarse, yet punchy anchovy vinaigrette with charred broccoli as an accompaniment. It’s still a stand-out dish but I preferred its predecessor with its pickles fennel.

Grilled veal chop (£27) was cooked with respect, within its maillard edges, was nicely pink flesh. It came with aubergine & tomato confit, giving the dish a Mediterranean accent.

Pan fried gnocchi with peas and broad beans (£16) was a hearty, meatless affair. They weren’t shy with the portion either which suited us just fine as none of my siblings have finite appetites.

Lamb en croute with pea purée (£28) was the dense cramming of moist animal, mushroom duxelle and spinach inside sublime pastry. The sauce it came with should feature in anyones dream roast dinner.

The crispy potatoes (£5) aren’t the sort that will give you that double crunch that ricochets through your fillings. But they had a lovely nutty flavour and a welcoming waxy texture.

VISIT NUMBER 4 – BROTHER’S 40TH. This time eleven of us came to dine and the kitchen crafted a set meal for us.

The beautiful plonk we couldn’t get enough of throughout the evening. The Davila came in at £45 per a bottle and the Bourgogne pinot noir was £50.

“The Ninth” to lubricate proceedings – it’s the restaurant’s take on a white lady. (£11)

Gorgeous craggy edged sour dough with salted butter was a sublime start. Being an avid bread geek, it matters that you get the good stuff.

Those utterly brilliant and comforting oxtail croquettes were the first thing I was searching for when the menu arrived.

These little pastries were made for the vegetarian, they were akin to empanadas and weren’t bad to be fair.

Burrata, garnished with black olive oil and hazelnuts, was as creamy as they get, came with heritage tomatoes which had a tang to suggested that they were marinated.

Sweet like candy langoustine ravioli was wrapped with squid ink pasta, got a sprinkling of peas and datterini tomatoes from Sicily. It’s another case in point of how good the pasta is here.

Whole sea bream was skilfully deboned, then it’s marinated with lemon confit and umami miso before it gets fired over coals. Another delectable piece of work.

The vegetarian got a stunning vibrant green risotto.

She also got a brilliantly made orecchiette with morels and egg yolk. Her scanty appetite meant I could hunker and hoover most of it.

Chargrilled lamb cutlets had a pleasing edge to edge pink centre that came with spiced aubergine and a dollop of acidic yogurt.

I would have been heart broken if it didn’t feature.

More skilled pastry work was showcased with this expertly made tarte tartin with rosemary ice cream. What I found though is that ice cream was peculiar like rosemary is too intrusive to be in desert, but that’s just a matter of personal opinion.

When did I go? Dec 2016, Jan 2017, June 2017 and June 2018
The damage: Expect to pay £60/80 per head with wine
The good: Staggeringly good modern cooking is what you get and it delivers it in spades. There’s so much compelling food here from the oxtail croquettes, the pasta cookery and that death-row pain perdu. They’ll even take a group of you, so you and a handful of your mates can play too. It got a Michelin star within a year, they were surprised. I wasn’t.
The bad: It’s stayed consistently good, but only the pita bread was a bit meh as was the odd rosemary scented ice cream. But these are all forgivable things.
Rating: 5/5
Would I go again? This is silly question
Address: 22 Charlotte St, Fitzrovia, London W1T 2NB
Web: https://www.theninthlondon.com