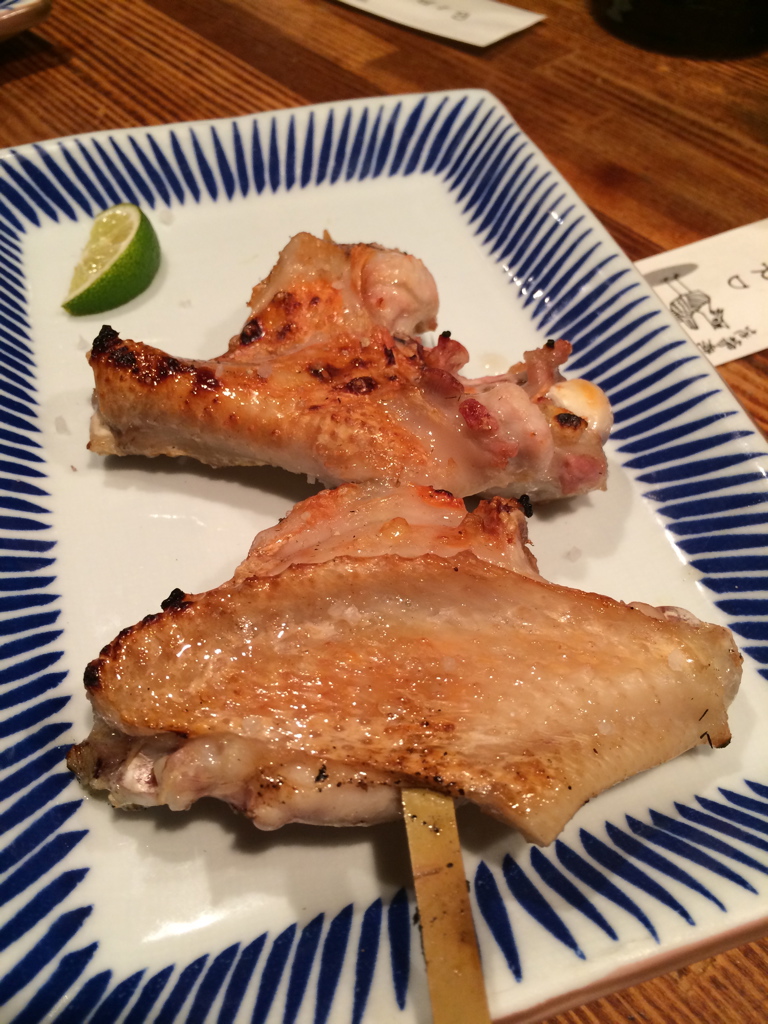 I’m no yakitori restaurant expert but after my experience of Pissing Alley the impression was that they were hole-in-the-wall type places, with cheap as chips chicken parts on a stick, consumed with copious supplies of beer and shochu so strong, it could be fuel for my plane back to London! Bird Land which has been around since the early noughties has far more sophistication, with the grill master Toshihiro Wada in charge, he combines the traditional techniques with contemporary finesse. He earns himself a Michelin Star in 2010 and has kept it ever since.

I must confess though it was a pain in the backside trying to find it, so if you’re not familiar with the area arrive early. Die-hard fanatics will know that they are the neighbour of the legendary Jiro – they are literally opposite each other in one of Ginza Metro’s many underground entrances. The one you need to get to looks like this – Hi neighbour. Closed at a very unsociable hour of 8.30pm. Liver – accurately cooked, silky smooth and pink in the middle. It was deluxe stuff. Skin and neck meat – multiple kisses on the charcoals with a pinch of seasoning. This chicken really doesn’t need to be covered in sauce to flourish and it was to eat something other than thigh, breast or leg. The flesh was slightly more packed and well that skin, let’s call it chicken bacon! Gizards – still pink in the middle and crunchy in texture. It’s not for the faint of heart and I prefer mine slow cooked or at least thinly sliced in a stir fry. No yakitori meal is complete without chicken wings. This yakitori tradition you should never question. Char grilled fillet with sweet basil sauce. It’s literally seared on the outside which is conducive of a pink centre. For chicken this is weird but I ate it and found it beyond subtle and into bland. Char grilled lotus root. I’m a fan of this vegetable and I can only describe it as a cross between potato and apple. It has the earthy flavours of root vegetable and the crunch of an apple. It’s chicken and egg over rice, so simple yet so exquisite. The simplicity was it’s brilliance and the flavours totally chimed. The egg I believe was cooked with chicken stock, and fluffed like a cloud over the sticky short grain rice. Little nuggets of sweet chicken morsels added some texture too. If I were to ever revisit then I would order two bowls – they were that good. The damage: Expect to pay ¥7500-¥9000 (£53-£63) per head with drinks.
The good: The chicken here comes with minimal seasoning which is testament to the real quality of the bird which is the Okukuji Shamo variety. The chicken and egg over rice is a right of passage and that dish alone would draw me back here.
The bad: Some hits and some misses, generally the experience was good and to watch the chefs accurately cook such high quality bird can only be a good thing. I’ve also never seen so much cross contamination of raw chicken riddled hands on cooked food. Oh and that shiitake mushroom I may as well have eaten it from the ground as it was barely cooked, perhaps it caught some of the fanned heat from the main grill but that was all. Only at Bird Land I guess.
Rating: 3/5
Would I go again? Maybe
Address: Tsukamoto Sozan Building B1F 4-2-15 Ginza, Chuo-ku, Tokyo, Japan
Closest Metro: Ginza
Phone: +81 3-5250-1081
http://www.ginza-birdland.sakura.ne.jp