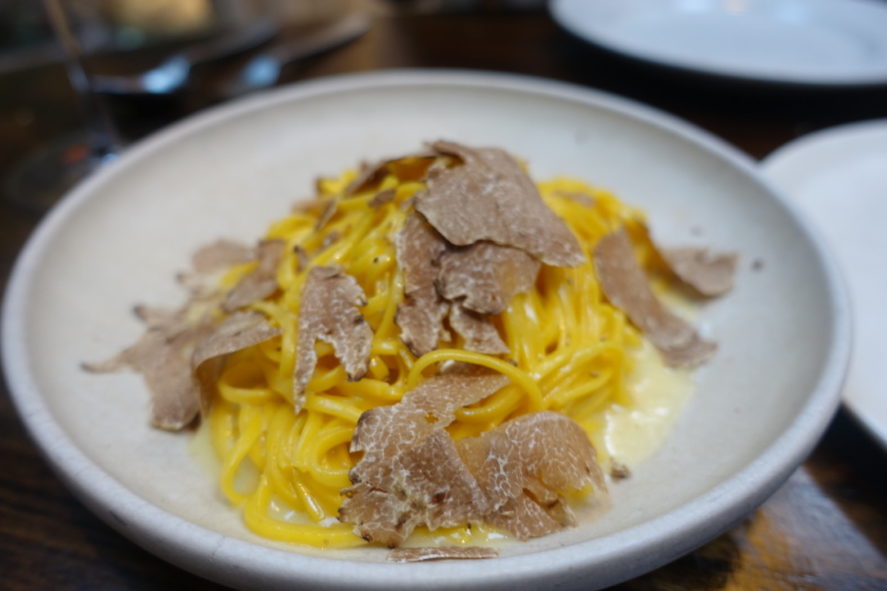 Luca in the town of Clerkenwell is famed for its Italian food and is the second instalment from the team behind Michelin bauble’d and deservedly lauded Clove Club over at Shoreditch Town Hall. Head chef Robert Chambers comes with a revered resume after doing stints at the Square, Locanda Locatelli, The Ledbury to name a few. He’s a man with an Italian grandmother who drummed home the virtues of Italian cookery when he was a wee boy. What he represents is “British seasonal ingredients through an Italian lens”. But why not? My impression is that it attracts a certain kind of clientele who want to be fed well and rinse their business expenses over three hour lunches – we had the afternoon off so watched them come and go whilst sipping 2009 Barolo. It’s a hard life. There are bare brick pillars, hefty leather banquettes and dark wood floors that please the eye inside, we sat at the back of the restaurant passing the well stocked bar on the way in. There is a magnificent sun inviting glass partition, us on one side and the terrace on the other, both are made for slow grazing.

The semi open kitchen has an L-shaped bar for charcuterie and to show off a gorgeous looking pear and almond tart the desert on offer – I wished ordered a piece but was already risking public indecency after undoing as many buttons as I could after my hefty feed here.

We started with the punchy Taurasi £120, there are of course cheaper bottles on offer.

We were given some of their sour dough. I’m someone who fetishises about bread and this one was worth fetishising about. The crisp poppy seed crust was all about crunch and a springy dough with the right amount of lactic character is a good thing in any bread head’s books.

Honour on the cheese front came in the innocently sounding parmesan fries £4.50. They looked like churros, the Spanish fried doughnut that you famously dip into hot chocolate, but this version tasted intensely of nutty parmesan – all guns blazing. This is where humble parmesan is raised up to a luxury item, I’m surprised it hasn’t reached cult status – having these sold on the street would swiftly stop the peddling of hard narcotics.

Next was the caramelised Orkney scallops £22.50 served in their shells with a good dollop of sweet Jerusalem artichoke purée and a topping of fire orange “nduja”, the spicy Italian sausage. The favours of the inherent sweetness from the scallops and the funky spice of the nduja summoned me like a mistress in the night.

Scottish chanterelles £11 cooked in butter, garlic and parsley are placed on top of toasted bruchetta to soak up all the good. It’s a snack for champions.

They bring the alba truffles to show, we couldn’t resist the funked perfume that filled the air and order some with our taglirieni.

Wild mushroom tagliatelle £15 is a good version of itself and we find ourselves slurping it until there’s no more.

Ravioli £13 with spinach, ricotta and sage butter were nice but doesn’t steal any shine.

Conchiglie £14 comes with a ragu of pork sausage, anchovy and mint. It’s delicious the meal is on full steam at this point.

Here is the butter yellow taglirieni with alba truffles £75. It’s subtle to allow for the nose twitching truffle aroma do its thing in gusto. I enjoyed it, but the price made me wince. Thankfully I didn’t pay.

Golden brown Hebridean lamb chops £27 came with rosemary breadcrumbs and crushed potatoes. How they impeccably cooked them this way with a juicy pink centre is as good as it gets. The jus made for dredging had a sheen that I could see my face.

Finally from the mains, butter enriched polenta came with braised ox cheek of dexter beef £25, which was tinged with the darkest of purples after a few low and slow hours with chianti. The entire thing fell apart from the mere prod of my fork, exposing the joyous soft melting fibres. My fellow diner said he felt full by just looking at the dish. It was accessorised with deeply bitter radicchio and pickled girolles. Take my word for this, you won’t need anything else if you order this.

Limonchello to end the meal

When did I go? Nov 2017
The damage: £200-230 per head with very expensive wine
The good: It’s easy to endorse Luca, the pasta cookery for one is worth shouting about and those stellar parmesan fries were profound deliciousness. The goodness continues into the mains, lets take the lamb chops and ox cheek that gave me lots of nourishing deliciousness and semi-major indigestion. Go easy at first, then order in stages – slow graze and that’s even coming from a big eater like me.
The bad: The bill gave the three of us vertigo.
Rating: 4/5
Would I go again? Yeah
Address: 88 St John St, Farringdon, London EC1M 4EH
Web: https://luca.restaurant