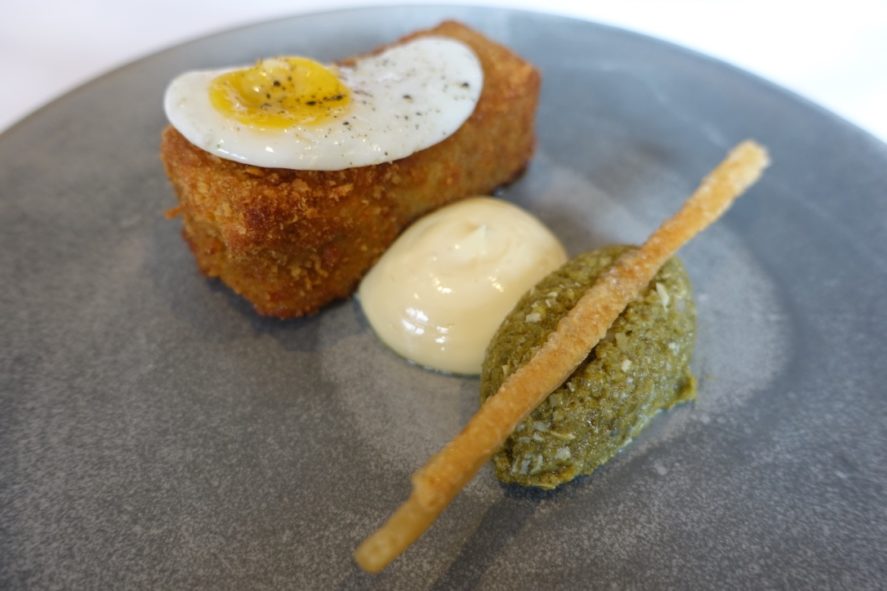 After a 3 year respite, a lot has happened since my last visit to Trinity Restaurant. I’ve gained new employment, I’ve gained a sweetheart that will put up with me, reached over 200 posts on here and a whole load of timber that my body lectures me about, but that’s a life choice that makes me deeply happy. Feel free to judge, I don’t care. Trinity has also undergone some significant changes, it gets a major refresh in 2015 with an additional restaurant built upstairs, aptly named ‘Upstairs’. And when I first came here, Trinity had 3 Rosettes for cooking excellence, but now since 2016 they have the most prized gong in the cooking trade, their own Michelin Star.

The inside is entirely a bourgeois living space, a model I’ve seen before from friend’s house who lives in Surrey with good taste. The bi-folding doors were open to let in the summer light. It’s as good as it gets in SW4.

The amuse bouche were a trio of beautifully done dainty crackers, there was squid ink tapioca, pastry filled with pea two ways and curd along with one treated to a dusting of seaweed and wakame.

Lubrication came in the form of a morgon senior £62 and a lovely crisp arneis £41. Props to our Irish sommelier for taking care of us throughout the outing.

The sour dough which are rustically shaped triangular pebbles are famed for their 12 year old mother culture, well at least in my eyes any way. During my previous visit I asked them to bring them throughout the course of the meal, even during desert as they are just gorgeous slathered with the butter they come with.

The ladies of the table opted for Greek salad that came with spheres of watermelon, black olive, graceburn apples and Greek salad consommé £11. My informant told me hers was just fine.

The chaps went for a Angus beef tartare, pickled mushrooms, smoked bone marrow and daurenki caviar £17. It was an artful piece of culinary mosaic with ripe old kick from the minerally beef and other deeply flavourful trinkets.

The crispy pigs trotters with sauce gribiche and crackling £10 was a starter I pointed the other diners to based on my previous visit. It was the right mix of texture, technique and taste. This version sadly didn’t flourish. The thin sauce inside the rectangle of greaseless pastry missed the deeply savoury notes balanced by the right amount of acidity from the one I had before. It just ended up being meh.

The main I went for was the crispy pork jowl with salt baked turnip, Amalfi lemon and black pudding purée £28. Whilst eating pork is a virtue in my house-hold, this un-sultry cook just wasn’t to my taste. The jowl could have done with a whole lot more rendering and the black pudding purée gave the texture of chocolate mouse and the dankness garden soil, it became a bad memory. I left most of it.

The loin of Lake District lamb £35, turbot £34 and John Dory £32 were by comparison delicious so I was informed and seeing the clean plates left behind, I believed it.

Redemption came in the form of the Charlotte potato balangere £10, which were skilfully sliced slithers of potato, sweet onion and fragrant bay tightly packed in a skillet, slightly fanned. It comes fresh from the oven with crispy edges swimming in its own juices. The result was a revelation of flavour and comfort.

Things carried on ascending with the warm sticky embrace of a tarte tartin, made for two £10 – that would be me and my bonny belly. It came with a rich prune and armagnac ice cream which countered all the bitter sweet notes of the pudding. There was nothing left of the gorgeous thing.

Elbert, my fellow diner got the raspberry ripple soft serve with whisky jellies and toasted oats £8. It was topped with a sugar torched disc of pastry that acted as a lid and a textural essential.

The meal was finished with a petit four of chocolate truffles, raspberry macaroons and a tour of “Upstairs”. Stay tuned for that review.

When did I go? June 2017
The damage: Expect to pay £70-85 per head with glugs of wine
The good: There’s lots of cookery to sing home about at Trinity, but during this visit, it only happened with half of the dishes, the meal stuttered through but finally ended with gusto. Ok so there’s no such thing as perfection, but at this level you’d expect a few more pops and bangs. That aside our maitre’d deserves a special mention as he, the Irish chap that has moved back to Ireland oozed grace and charm.
The bad: I’ve already addressed the inconsistency of the signature trotter starter, candidly, it was easily forgettable, but I think I caught them on a bad day. The pork jowl dish wasn’t one of those pleasant things in life either. The second time around just wasn’t as absorbing as the first, star or not, but I’m sure a restaurant of this quality can iron through those culinary creases and can do just fine.
Rating: 3.5/5
Would I go again? My time will come!
Address: 4 The Polygon, Clapham, London SW4 0JG
Web: http://www.trinityrestaurant.co.uk