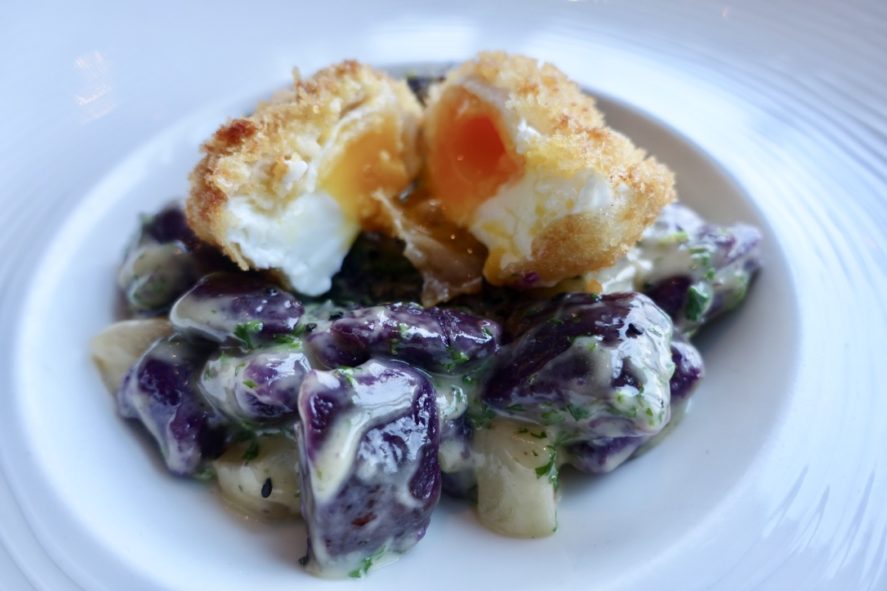 Brooklands Hotel is a celebration of his and her’s pleasures. A spa for pampering and a race circuit for doing big skids in some of Stuttgart’s finest three-pointed-starred beasts, a weekend of loud engines and pampering. Of course you’ll get a snappy racing themed hotel. First opened in 2010 within the historic Brooklands Estate, home to the world’s oldest and most historic motor racing circuit in Surrey. There’s an outdoor hot tub which overlooks the Mercedes Benz World race track along with panoramic views of the same from the rooms. The reception is a hulking space that leads to the suites and a double Rosette restaurant. It also has a quartz and granite silhouette of the original track it’s famed for running through it. It’s an orgy of motor racing lineage every where you look.

Everything is better with lubrication over long weekends so we start ours with whisky sours £12 and a mid-bodied Kung-Fu Girl riesling £34. Expert cocktail making isn’t their forte here so I’ll stick with the wine or spirits.

Being an over-sized finicky human about bread means that it needs to be the good stuff. Here it tastes hard and stale – perhaps we could have been friends if it was fresh from the oven, but instead it’s five-pence shy of a fiver I’ll never get back.

Purple potato gnocchi £8.95 was by design meant to be with blue cheese on this menu, not being a fan of the stuff I asked for an alternative – they gave me parmesan. What they created was a memory lingering bowl of soothing lusciousness. The parmesan itself is deep and nutty, it’s robustness is balanced by the earthy-sweetness of the purple potato and cubes of poached pear. It’s crested with a crispy panko coated egg for good measure. If the meal stopped here, then I would have walked away happy.

For the mains, I opted for the crispy blue soft shell crab with a papaya-peanut salad and nam Jim dressing £9.50. Soft shell crab is one of my favourite things to eat from the shore, but it’s dry and unforgiving here especially with the soft tepid batter it was covered in, the bun was more of the same. Nam Jim is a pungent sauce of sour, sweet and back-hits of chilli, all these qualities seemed to be lost at customs on the way over from Thailand. It’s a poor attempt at a Thai accented sandwich, dodge this one. The saving grace was that the fries had a nice pleasing rustle.

The boss had pan seared bream with hasselbacks and tender broccoli £20.95. The crisped skin and pearly white buttery flesh was pleasing. Sauce vierge is a classical French cook of chopped tomatoes, basil, olive oil and lemon – it goes hand in hand with fish. Here they a blueberry version with the viscosity of treacle, it’s a small dose application to avoid over-powering the fish and probably goes better with a desert, but I applaud the chef for pushing the boundaries.

For desert I went for the Earl Grey and rhubarb cake £6.95. The triangularly cut sponge was strident and under-whelming, it was like eating Earl Grey soap, the driest kind that could double up as a kitchen sponge. The tea jelly and rhubarb bits it came with seemed to come to the plate and die too. It was crying out for some sort of sauce to bring things together instead of the pointless smear of custard it came with. The mint shots as advertised on the menu went missing in action too. I left most of it, our waiter made no mention of the wreckage.

Things got better with their “s’more brûlée”. It was set beautifully, with a top that was all about crunch and snap. Vanilla and bourbon featured as well as a chocolate chip cookie and a torched marshmallow.

The bill minus a few items that were included in the room package.

When did I go? Jun 2017
The damage: Expect to pay £50/70 per head with drinks
The good: There are some memory lingering moments with the food, let’s take the purple potato gnocchi, a compelling starter in its own right and the creme brûlée was a fine example of itself, but it falls off the cliff from there. My greedy disposition hates to waste so I can generally finish the distinctly lacking, but I excused myself this time around. It makes me wonder how they got their double rosettes.
The bad: The hotel facilities are class but I’ll pass on the food next time.
Rating: 2.5/5
Would I go again? Maybe
Address: Brooklands Dr, Weybridge KT13 0SL
Web: https://www.brooklandshotelsurrey.com