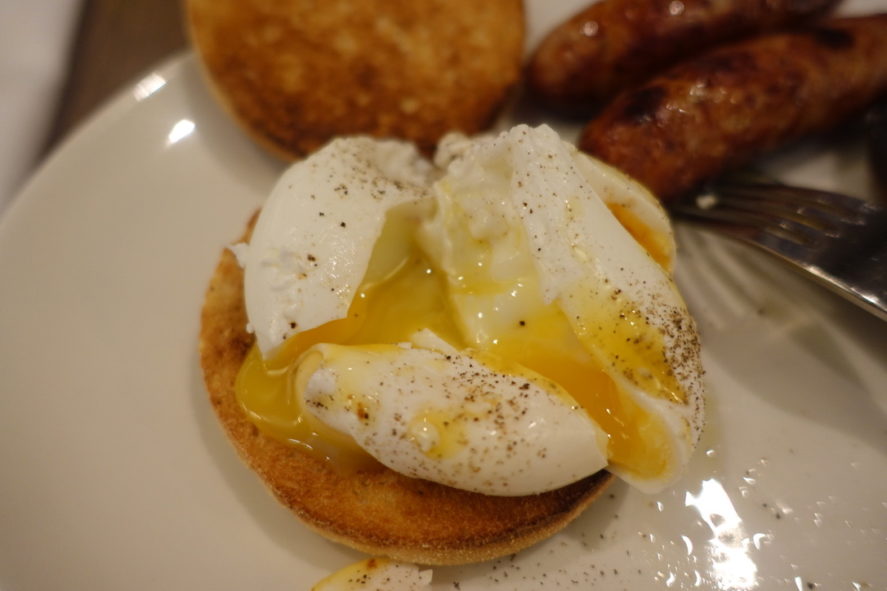 Andaz London of Liverpool Street is a 5 star hotel where city boys take their mistresses to get up to no good, it was formally the Great Eastern Hotel and has been around for well over 100 years. They’ve got the 1901 ballroom with its stained glass dome ceiling, this grade II listed room is so called as it dates back to 1901. It’s a cathedral of a place, with starchy white table cloth’s primed for discussing tactics for the boardroom whilst chugging down expensive scotch. Its staggeringly beautiful. There’s also Rake’s Cafe Bar which is a place for avo on toast by day and dry humping your office mates by night – the low lit room which thuds out house music until gone midnight demands such activities. Miyako is their sushi peddling contingent and Lady Abercorn’s Pub & Kitchen is their “sassy” boozer. I came to fuel my day at their all day and night Eastway brasserie, twice. Everything is under one roof for easy access.

A juice and brew, the latter was frothy topped, dark and rich. Just how I like my lattes.

The Eastway fry-up £12 was reported as “decent” by Shoney. Others went for eggs bennie, not my bag as hollandaise is just bad manners in my book.

I went for the farmers omelette £11 which was packed full of salty bacon, mushrooms and cheese with a side of black pudding £2. It was ok, but if I was in a niggling mood, I’d say it was rubbery and could have done with less time on the stove – that accounted for the black pudding too. Triangles processed white toast came with it too, naturally being a bread snob that I am, I left it to die on the plate.

Visit number two was roughly two years later, with a different set of circumstances. Myself and my “future” business partner at the time, came to discuss strategy on what to say in the boardroom for our resignation in the very same morning. We plotted the steps to our dream of being our own bosses. The large space with subdued lighting and high ceilings was perfectly suited for the job.

The lattes are great here – silky and lusty just like me.

Hash browns, scrambled eggs and sausages, ten pounds for the lot. You get a muffin for your troubles too.

I went for soft poached eggs, a grilled portobello and sausages, a muffin came with it too, a parched one at that. It was almost like a cracker. I dragged the sausages through the creamy yolks to get more flavour to make up for their absence in the sausage. I’m not sure if it was my nerves that dampened my appetite or the plate of food was just exceedingly boring. Perhaps both.

When did I go? Apr 2015, Oct 2017
The damage: Expect to pay £15-£20 per head for breakfast
The good: The coffee and classy venue is great.
The bad: I don’t think breakfast is their forte.
Rating: 2/5
Would I go again? It hasn’t happened yet..
Address: Eastway Brasserie, 40 Liverpool St, London EC2M 7QN
Web: https://eastwaybrasserie.co.uk