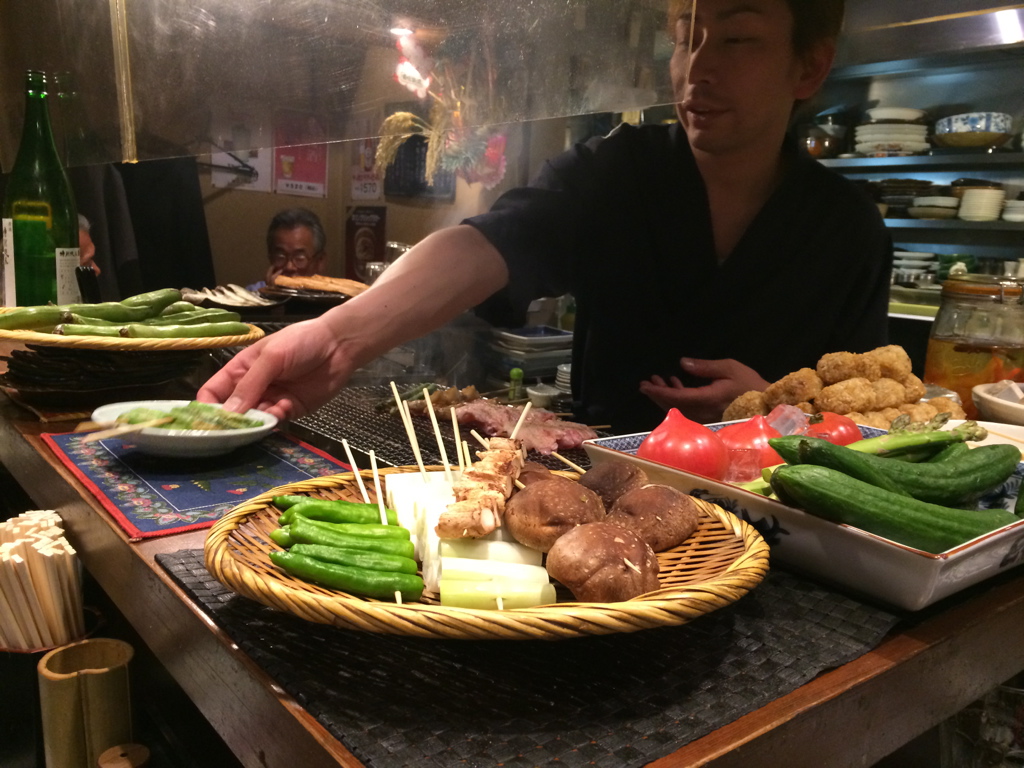 A short walk from Shinjuku station will bring you to Omoide Yokocho which translates as “Memory Lane” or as the Tokyo locals call it “Piss Alley”. So called as it started off an illegal drinking spot in the 1940’s and due to the lack of loos, punters would relieve themselves at the nearby train tracks. It’s a sum of small watering holes, really compact yakitori grills and ramen joints. The history of this quirky alleyway stamps back to around the 2nd world war and remains largely untouched. It has reams of nostalgia and wafts of yakitori smoke that bellows from practically every shop front. Japanese beer, shochu, and sake are a plenty & the cheap frills make it a popular destination for locals along with the travellers. We randomly wondered into this yakitori bar and to call it intimate is probably an understatement – I counted 9 seats and you’re literally elbow to elbow with local salarymen and fellow tourists. Forgive me though as I didn’t take down the name of the place or address. If you know what it’s called leave me a comment! There are a variety of staple yakitori style vegetables available from leeks, shiitake mushrooms and lush shishito peppers. Sea snails on the house were chewy little things that could have done with less cooking in my humble opinion. They could have been from the sole of an old trainer hacked up and shoved into those shells. Chicken thighs, brushed with the chef’s special yakitori sauce whilst on the grill and dipped into a claypot filled with it prior to serving making the dish pretty tasty. Butterfly’d chicken wings with bones intact cooked with minimal seasoning to highlight the chicken’s natural sweetness and the smokiness from the yakitori grill. When did I go? April 2014.
The damage: Expect to pay ¥2000-¥3000 for a few skewers and a beer or 2 (£13-£20).
The good: Seeing the chef at work turning the skewers with precision and provided the theatrics was a cool experience. Seeing my mate being hounded by our drunken Japanese middle-aged lady was also grin-worthy!
The bad: The food wasn’t that memorable unfortunately.
Rating: 2.5/5
Would I go again? No I’d like to try others
Address: Japan, 〒160-0023 Tōkyō-to, Shinjuku-ku, Nishishinjuku, 1 Chome−2, 西新宿1-2-14